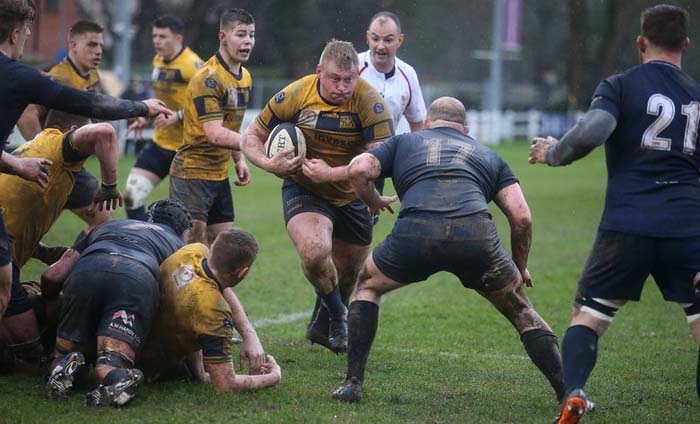 Henley Hawks had to contend with both Storm Dennis and a resolute Westcliff defence to climb to the top of the National 2 South standings on Saturday afternoon. It was a solid performance from the Hawks, who now head into the rest week in buoyant mood.

It was a testament to the hard work put in by the ground staff, who worked tirelessly to make sure the game kicked off, given the atrocious weather conditions across the country. This was highlighted by just four National 2 South fixtures being played on Saturday with the rest postponed.

Henley got off to a flying start with hooker, Tom Emery crashing over from close range after just two minutes. Alex Burrage, in at fly half for the injured Ben Bolster, duly converted.

Despite being pushed back in the scrum in the early exchanges, the Hawks extended their lead not long after when centre, Will Panday charged down a kick close to the visitor’s goal line, and was left with a simple touchdown. The relatively inexperienced backline for the hosts were finding gaps in the visitors defence, with half backs, Elliot McPhun, and Burrage managing the game exceptionally well given the conditions.

Understandably, the weather was beginning to have an increased influence on proceedings, but Henley scored a third try just after the half-hour mark. Reuben Norville made a superb break in the middle of the park, and a nice offload to fellow winger, Jack Robinson saw him finish confidently in the corner. Burrage was narrowly short with the touchline conversion, and the Hawks went into the changing rooms at half time with a sold 19-0 lead. Had it not have been for some profligacy on their part, the lead may very well have been more.

Westcliff started the second half brightly, and scored their first points of the afternoon when patient build-up play saw scrum half, Chris Bolton over in the corner. The tough conversion attempt fell short. However, Henley struck back almost immediately with Tom Emery touching down again for his second of the afternoon, and giving the home side their bonus point try in the process.

With the Hawks now dominant in the set piece, they continued to batter away at the visitors line, and were rewarded with a fifth try when substitute Reuben Knight powered over in injury time to cap a fine afternoon for the home side.

It was a satisfying result, with the Hawks dominating the game for long periods. What will be particularly pleasing for the coaches was not just how well the lineout is functioning, but also the excellent game management on what was a horrible day. With Tonbridge Juddians failing to secure a try bonus point in their narrow win over Old Albanian, the Hawks now sit at the top of National 2 South, with TJ’s in second and Taunton in third, albeit with a game in hand.

With a rest week coming up, Henley can now take stock and look forward to what will be a huge contest at fifth-placed Clifton on Saturday, February 29th.