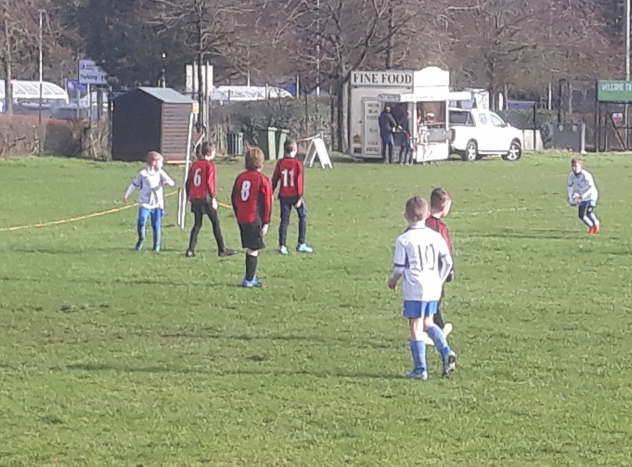 This Saturday saw the Henley Hurricanes U9s’ penultimate league fixture of the season, a home fixture at Jubilee Park against a spirited and capable Eversley Raptors U9s team. The match was a keenly fought encounter, with both sides showing pace, accuracy and defensive skills at different times, but with neither team dominant. The Hurricanes had most opportunities to score whilst the Raptors tested their defence with rapid breaks.

Early break for the Hurricanes
The game started in driving rain, conditions which were not welcomed by players or spectators. The Hurricanes scored at the first opportunity, Will Goulden coolly slotting home after some smart work in midfield. However, the Raptors continued to play an impressive passing game, causing problems for the Hurricanes’ defence, Dominic Ellis making an important block to stall one particular challenge. The Hurricanes attacked through Will Goulden and Will Lindsay, but the shot was saved. The Raptors broke quickly from the restart, finding an equaliser from a clean shot. The Hurricanes slowly rebuilt after the goal, their attacking game coming together to exert pressure on the Raptors. A string of corners followed, but the Raptors were equal to the task. The quarter ended with Oscar Robinson firing just over the bar from distance.

Midfield Battle
In contrast to the first quarter the second began with the sun coming out. The Raptors made the early running, with the Hurricanes on the back foot in defence. The game was being played out in midfield with few chances for either team. For the Hurricanes, Oscar Robinson hit the bar from a free kick and Will Lindsay shot just wide. At the other end, Jack Callaway was in control in goal. The third quarter saw the Hurricanes start strongly. A first move between Nicholas Hernandez St Clair, Jake Thatcher and Oscar Robinson led to a shot which was saved, but the second produced a goal for Oscar Robinson, who put the ball nonchalantly past the keeper after rounding the defence. The goals now flowed for the Hurricanes, an Oscar Robinson cross being unfortunately turned into the goal by a defender – despite Jack Callaway being ready to pounce. Shortly after, Luca Currie calmly scored from a penalty. The Raptors were still dangerous, Jake Thatcher making an important intervention at the other end. At the end of the quarter, Oscar Robinson scored his second, built on good work with man-of-the-match Nicholas Hernandez St Clair in midfield.

Final Flourish
The Hurricanes started the final quarter brightly, but it was the Raptors who scored from a break. New goalkeeper Luca Currie did very well to parry the first shot but had no chance to stop the rebound, which was tucked away by a Raptors striker. At the other end, the Hurricanes pressed the Raptors with more corners. The Raptors’ keeper made a brave stop from a point blank shot to deny Will Goulden. Meanwhile, Will Lindsay also had a shot saved and Jack Callaway shot slightly wide. The Raptors continued to pass the ball deftly, and another foray into the Hurricanes’ territory led to another goal, just crossing the line after a goalmouth scramble. The Hurricanes had to endure a period of pressure, with Oscar Robinson and Jack Callaway defending well. However, there was just time for Will Goulden to complete his brace from a break to conclude a successful morning for the Hurricanes.