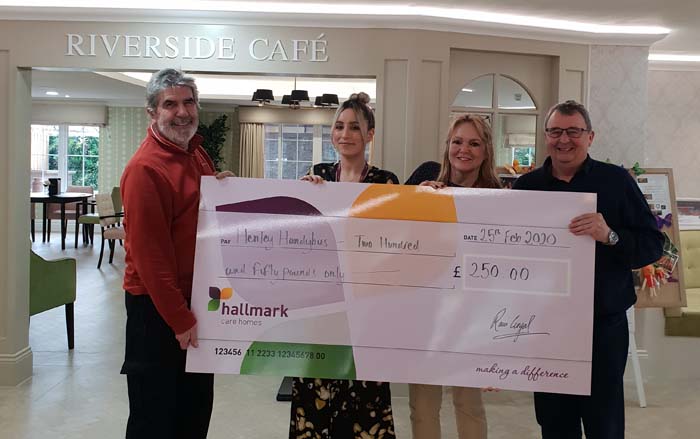 Henley Manor, a new residential, nursing and dementia home on Mill Lane has donated £250 to the Henley Handybus.

Representatives at the home which opened last month, donated the money to the free service which transports up to 15 elderly and wheelchair users daily to local clubs, supermarkets and the day centre before returning them home.

The cheque was presented to support the service after it has announced they may have to cut back on the number of runs it makes following a steady decline in passengers over the past 12 months.

Customer Relationship Manager at Henley Manor, Charlotte Bennett said: “Henley Manor Care Home are proud to support the Henley Handybus. The bus has been serving the local community for over 30 years and plays a vital role in supporting the town’s senior residents. It enables them to continue getting out and about to meet their friends and to go shopping locally.

“The residents at Henley Manor will also be using the service, which provides them with a great opportunity to meet people locally and build new friendships.”

Richard Hodgkin, Chairman of the Trustees said: “I’d like to thank Henley Manor for the cheque which is very much appreciated.  I look forward to providing services from both the Handybus and The Henley Talking Newspaper to Henley Manor residents.

“The bus will collect residents from the home and take them to various places in Henley on a daily basis. It carries all kinds of people including those with mobility difficulties and people who perhaps do not have transport or are unable to access regular buses.”

The Henley Handybus also runs The Henley and District Talking Newspaper Association which provide an audio version of The Henley Standard newspaper to around 80 visually impaired people each week.

For more information about the Henley Handybus or the Henley and District Talking Newspaper Association please call Robin Popham on 01491 571974.