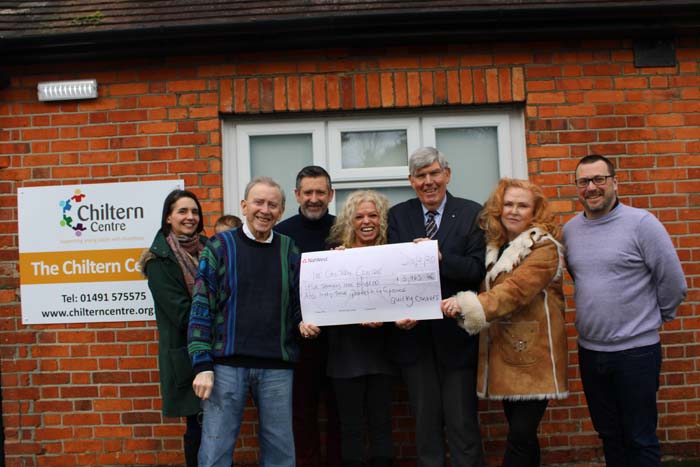 Some of the actors and musicians behind the alternative and hilarious adult pantomime Cinderella 2 – The Mrs Charming Years performed at the Kenton in December presented a cheque to The Chiltern Centre this week for £5,963.46.

Rachel whose idea it was said, “Firstly I’d like to thank the amazing job that the musical directors (Sam Wilkinson and James Ashby) did to get all the bands together.  It was a staggering amount of money but we’re so delighted that everyone supported it.   I think it is one of the charities we wanted to do something for and we just need to work out what we could do that would make that kind of money in one night.  We’ve done things for other local charities but The Chiltern Centre do so much and it felt quite special to do it for them this time.”

Paul Barrett, Chair of the Trustees at the Chiltern Centre said, “What we really like is unfenced money. The most difficult thing when you run a place like this is a recurrent expenditure (like staff salaries, electricity bills etc). Everybody wants a specific nice capital project that they can put their name to. At the moment the big thing we’ve got going through is we’re replacing our minibus. We’ve had it since about 2010 so the money may end up going towards this as we use it most days. This donation is hugely welcome.”

Carol Decker added, “Rachel approached me to be part of it.  I’ve known her about 15 years.  I first met her when I moved to the area and she used to chaperone children on movies as extras and my kids were involved in that.  Rachel is an all-round great girl.  I think the night went brilliantly.  I think the whole town rose to the occasion and it was so nice to see so many local artists involved.  I think the amount is just phenomenal.  A big shout out to Henley to thank you for your support.  The Centre is a really important local asset.  When you can see where the money is going, when you see it impact locally, it really means a lot.”