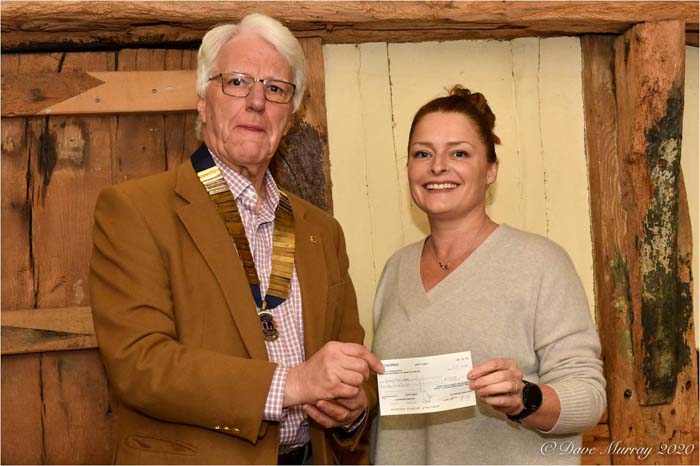 More children with additional needs in the Henley area who would like to have music lessons with Henley Music School (HMS) will be able to start thanks to a generous donation from Henley Lions who presented a cheque for £1,000 to the school on Monday night.

Henley Lions Secretary, David Murray said, “The club voted to award the HMS £1,000 which is proceeds from Santa’s Sleigh 2019. I proposed that we make the award as I feel that the HMS helps the development of such a large number of Henley’s children and Santa’s Sleigh is all about children. Since taking over the sleigh we have always supported the Bishopswood Special School Christmas Party which we did once again this past year and have already booked for Christmas 2020. But, we were also able to make this donation from the funds we received from the generous Henley residents.”

The Santa sleigh raised £4,500 in December and last month a cheque for £500 was presented to 1st Shiplake Scouts to help with fire damaged hut.

Founder and Principal of Henley Music School, Laura Reineke who accepted the cheque from Henley Lions President David Skinner said, “The cheque will go towards Alison Wilkins our specialist autism and additional needs teacher who currently has around 18 pupils of which 90% are funded entirely by HMS. She also has a very long waiting list. The difference music makes to these young people is almost unbelievable. Their behaviour, attitude to learning & general well-being is so improved.”

“It’s so lovely that the Santa Sleigh funds are helping HMS with this specialist education, because like Santa, music is magic!  We are hugely grateful to the Lions, we need around £60,000 a year to operate at our current levels & we are in such demand due to appalling school funding that we are under pressure to grow at a ridiculous rate.”

Henley Music School is a charity which provides inclusive, fun music education in all forms to anyone regardless of age, ability, means or background. Laura and her friends through the Henley Open Water Swimming Club  (the ‘Mermaids’) are trying to raise £8,000 for the school by swimming the Channel in relay in June.  If you would like to donate go to click here.