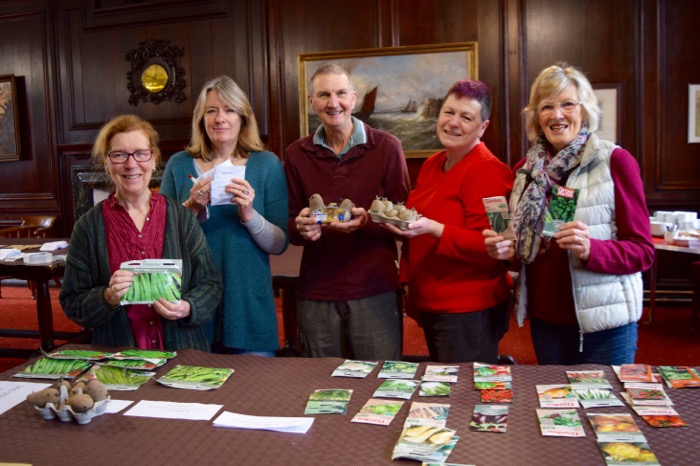 Local gardening fiends and veg-patch fanatics had a blooming marvellous morning at the second Henley Seed Swap on Saturday. The green-fingered residents of Henley were invited to the Town Hall to exchange their unwanted seeds or pick up a new packet in exchange for a donation. The event was organised by Greener Henley, Henley Allotment Association and Henley in Bloom, with support from the Town Council and the Heritage Seed Library.

The second annual spring seed swap came off the back of last year’s highly successful event, which saw many people attend to dig through stock of the donated seeds. This year’s swap seemed to have grown even bigger, with visitors turning up with their donations as soon as doors opened. Sharon Oldham, Secretary for the Henley Allotment Association, was delighted with the attendance. “It’s brilliant,” she exclaimed. “Last year, because it was the first one, I don’t think anybody brought seeds to swap just because they weren’t aware that it was going on, but this year I’ve already seen people putting seeds down to swap, so the principle is working.”

Sharon also suggested that the flourishing turnout could be thanks to the support of the Heritage Seed Library, who advertised the event in their catalogue. “We contacted the Heritage Seed Library to give them the donation that came out of last year’s event,” she explained. “They were very supportive and put us in their seed swap events list in their catalogue that goes to all their members. So we’re now official! They’ve sent us absolutely loads of seeds again to support us.”

The Henley Seed Swap has an impact on gardens beyond the town, too; Jessica Philbrick, who attended both last and this year’s swap, was so inspired by the idea that she has set up another seed swap in Sonning Common. “I came to this one last year and thought we should do something similar because it’s brilliant,” she said. “It’s such a nice idea, and it gets everyone chatting.” The Sonning Common Seed Swap will take place on 14th March at Heath & Watkins from 10am to 2pm.

All donations raised by the Henley Seed Swap will be divided between Greener Henley, Henley Allotment Association, Henley in Bloom, and the Heritage Seed Library. The organising team are also hoping to add more gardening events to the local calendar; Sharon Oldham stated, “Last year we irrationally promised that we would try and run a seed saving workshop, and of course time overtook us, so we might try and do that this year.”

If you would like to try your hand at growing your own fruit and veg, the Allotment Association is always welcoming growers old and new to their community. For more information, visit their website.

Citizens Advice Campaigns Hit the Target in 2019
Scroll to top