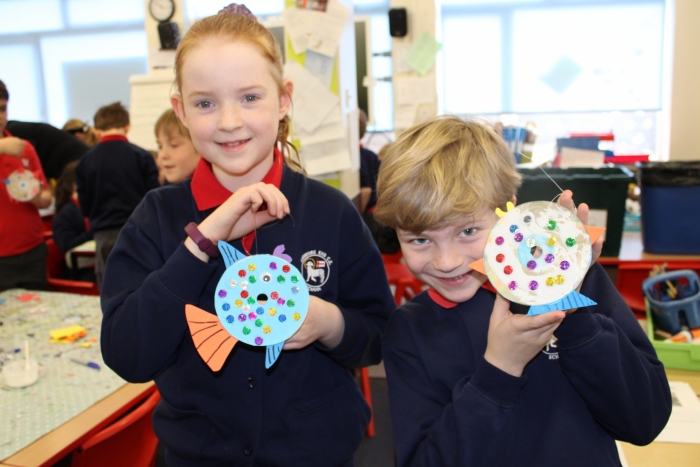 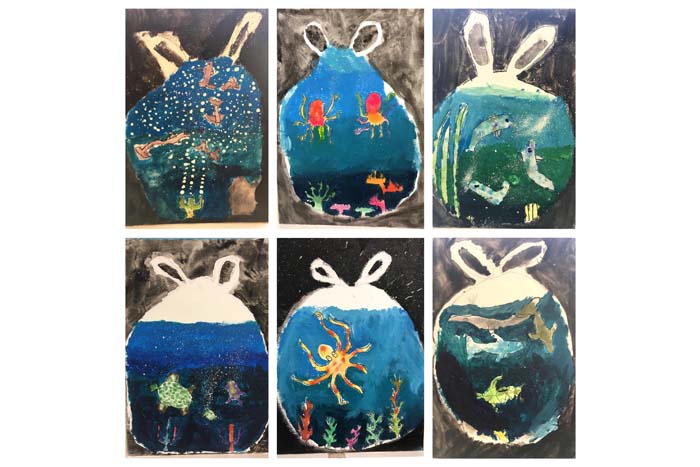 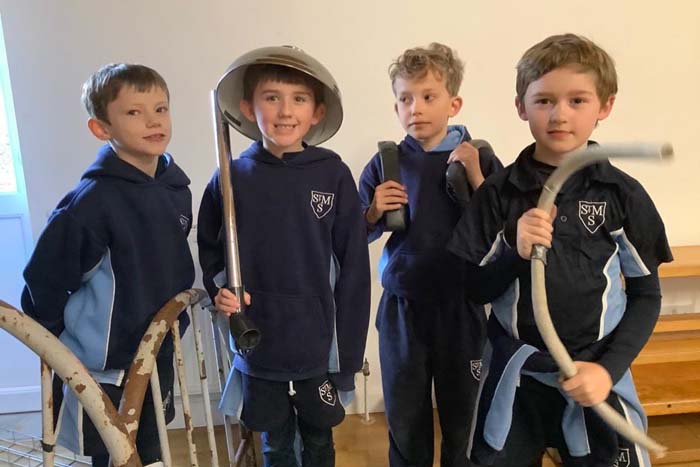 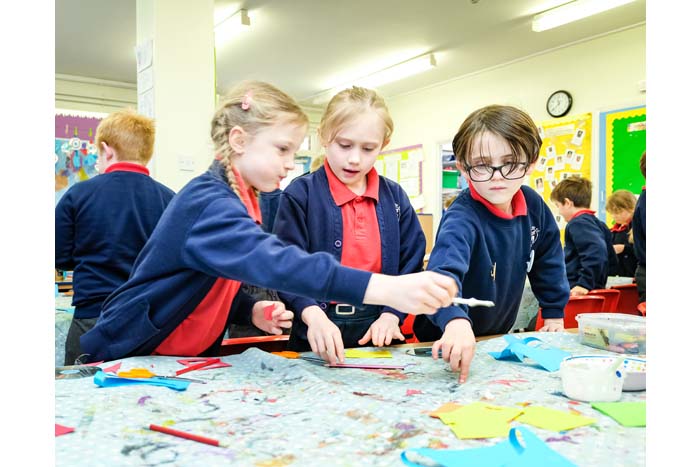 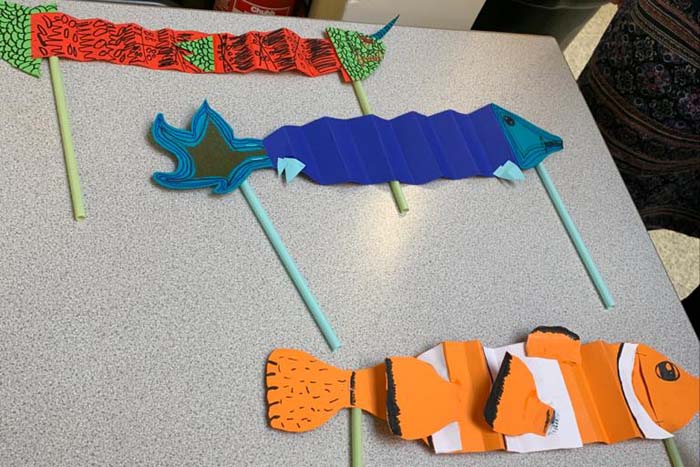 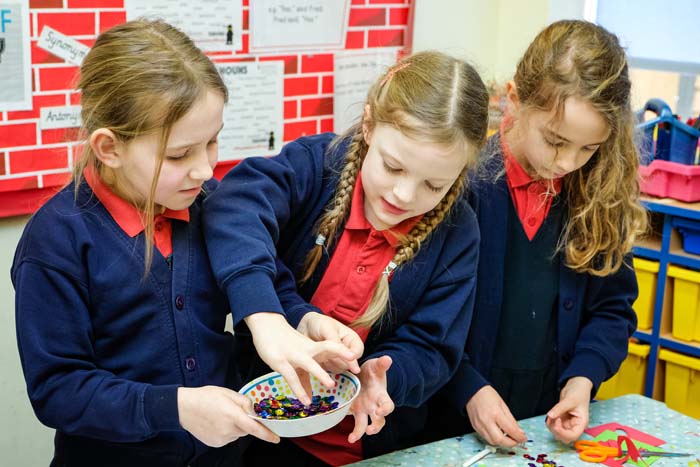 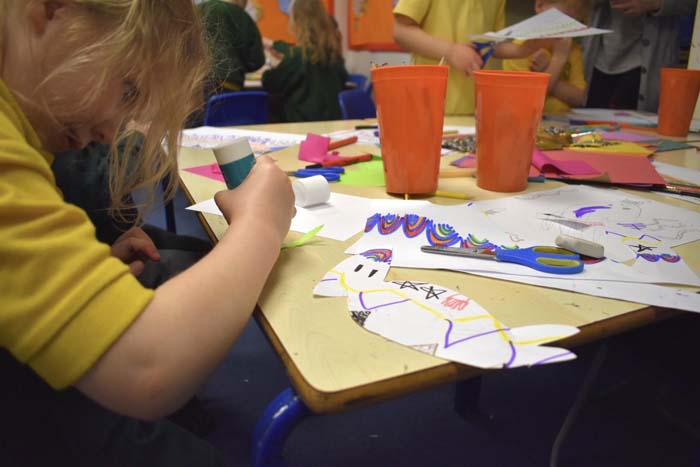 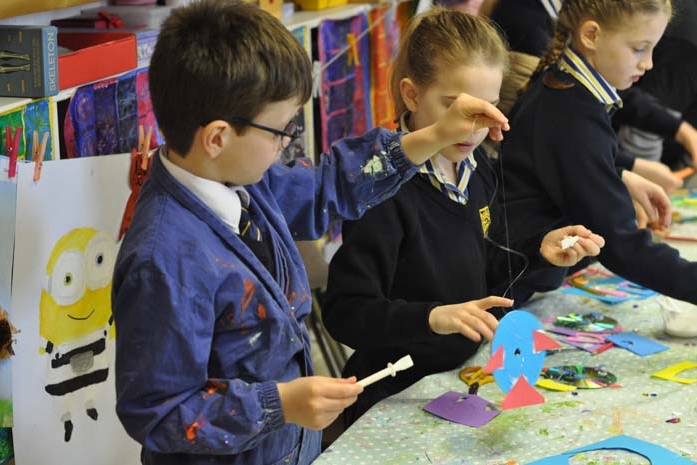 Dr Squabbles arrived with his Red Van at Trinity and St. Mary’s Preparatory School where the children used their imaginations to explore the deep Oceans with a submarine they built from recycled objects.

Lily Rossiter, a local illustrator, enchanted pupils at Valley Road and Trinity. The Reception class at Trinity drew fish and jelly fish and used collage to add rocks and seaweed.

ArtPod highlighted the importance of ridding the oceans of plastic through workshops at Peppard and Sonning Common schools. Pupils made ‘plaques’ on board with water washes to represent sea creatures caught in plastic bags.

The Arts Society Henley (TASH) encourages young people to have an interest in the arts. Marilyn Sturgeon, their spokesperson for Young Arts, believes sponsorship of HYF’s art workshops in Henley’s primary schools is an excellent way to do this. She said: “Our volunteers look forward to taking part each year and seeing the magic created by the very different artists.” This year the majority of HYF’s art workshops were supported by TASH volunteers.

Art Teacher, Nicki Poulter at Rupert House said, “The children were excited and engaged by this year’s theme, and gained a lot from the experience. The issue of sustainability is in the forefront of our minds as a school, so it was an added bonus that the workshop had recycling at its heart. We are so lucky to have the Henley Youth Festival on our doorstep. The diverse events are always enriching for our children, and we greatly appreciate the fact that the Henley Art Society are able to fund some of these activities. The children at Rupert House Prep School all submit work for the Art Competition, and will look forward to visiting the exhibition at the River and Rowing Museum . It is extremely valuable and motivating for them to see their artwork displayed in a public setting.”

Camilla Shelley held mobile making and screen-printing workshops with Bishopswood, Badgemore and Sacred Heart at the River & Rowing Museum. As part of their workshop, pupils visited the Gertrude Hermes exhibition of Linocuts on sea themes for inspiration.  Badgemore created mobiles reflecting sea-creatures. TASH Volunteer Sally Tooher reported that the Bishopswood students were so proud of their artworks and the Year 3 Sacred Heart teachers, Mrs Artherton and Mrs Butler said the children were fascinated by the screen printing and loved looking at the work of Gertrude Hermes and copying her patterns to put on their own prints.

Emily Cooling visited Nettlebed Community School where pupils created ‘wavy’ fish, cutting out heads and tails in coloured card and making a fan-style body to simulate movement.  TASH Volunteer, Liz Jarvis said: “The children were focused and attentive, fun and chatty, and they were delighted with the products of their work. As you may imagine they were all very different fishes!”

Marilyn Sturgeon continued: “We really admire the energy and dedication of the festival organizers and the contribution they make to the enjoyment of so many children and young people.”

A small selection of work produced in the art workshops will be on display at the HYF Art & Film Exhibition at the River & Rowing Museum, Mill Meadows this weekend from 11am – 4.30pm on Saturday 14 March and from 11am – 2.30pm on Sunday 15 March.

Eagle Eyed Visitors Will Be Delighted Birds of Prey Return to Museum for Ea...
Scroll to top