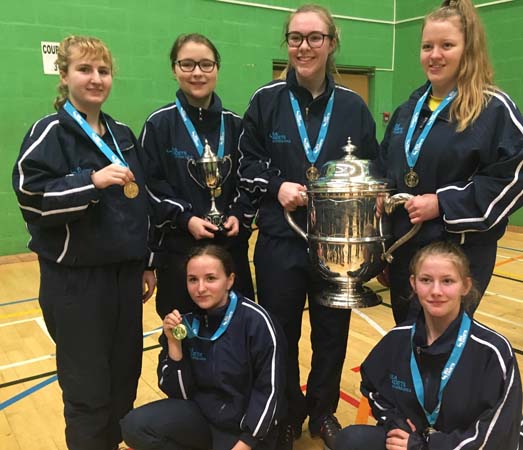 Henley Sea Cadet unit have cause to celebrate with their Senior girls winning the National Sea Cadet 5-aside Football competition.

The atmosphere was electric at this highly-prized competition, with Sea cadet teams representing areas from all corners of the UK. The Henley team started off tentatively with a 2-2 draw against the team from the South West region – the team they would ultimately defeat in the final 4-2. They then found their feet and moved quietly through to the semi-finals.

The Southern Area Senior boys and Junior boys had already qualified for their respective finals when the girls came to play their semi. “We were so nervous”, said Lance Corporal Lelliott, “The pressure was on to make sure that we also won this match and not let the whole team down.” Eastern region were definitely more confident but superior skills and drive (and pride) led the girls to a convincing victory.

With just the final to go, “I’ve never heard noise like it!”, said Nicole Donahue, Everybody from the Southern region was screaming from the balcony. It was so nerve-wracking.” But following a penalty in the second half, Lelliott slammed home the winner with 30 seconds to go.

There then followed the prizegiving with the Sea Cadet Captain himself presenting the cups and medals to the winners.

A tremendous victory for the Henley girls and the first time the Unit has taken this National title.

“We’re hugely proud of the girls and the way they applied themselves” said Chief Ollie Collis, Officer in Charge of TS Guardian in Wargrave Rd. They’re a credit to the Unit and it’s great to see young people attending the unit every Monday and Friday evening and giving up their weekends to take part in competitions as well as supporting activities in the local community. It’s just such a shame that we weren’t able to enter either a Senior Boys team this year to take on the other Units at the Area competition. But now we’ve set this precedent, we have to do well at all of the rowing, sailing and other competitions coming up this year. Excellent work girls! Well done! it was well worth that long journey to Grantham.”

If anyone would like to find out more about how they could be part of this award winning Sea Cadet and Marine unit, just drop us a line (info@henleyseacadets.co.uk) or come and visit them. They meet on Monday and Friday evenings (7.15-9.30pm) and are fortunate to be based right on the river opposite the bandstand.

The Henley Herald website provides an up-to-date and unbiased digital news service for
Henley-on-Thames
Eagle Eyed Visitors Will Be Delighted Birds of Prey Return to Museum for Ea...