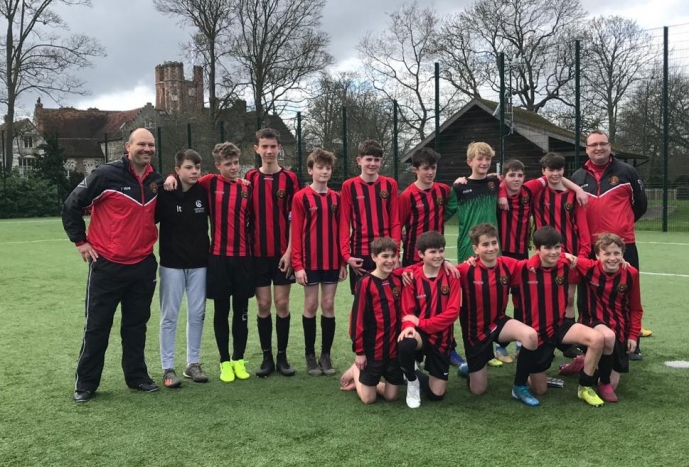 The U13 AFC Henley Hurricanes beat the Bracknell Cavaliers 4-1 at the prestigious Bisham Abbey venue in this East Berks FA Cup semi final.

The Hurricanes put in the performance of the season as they dominated the first half to secure a place in the Final of this historic Cup competition.

Striker Harvey Herbert was combining beautifully with Henry Mendelsshon in the early stages of the game and it was this electric combination that put Henley into an early lead. Mendelsshon clipped a perfectly weighted through ball for Herbert to run on to and he made no mistake from 10 yards out as he planted the ball past the keeper to make it 1-0.

Captain Oliver Saunders was marshalling the back line with great efficiency and the Hurricanes kept it tight having taken the lead. Joe Winpenny was key to this as he made a number of key interceptions and clearances to keep the lead intact.

Sam Winters, playing in the centre of midfield, quickly doubled the lead for the Hurricanes as he picked up a loose ball in midfield, beat one Bracknell defender before calmly slotting the ball past the keeper to make it 2-0.

Tom Atkinson was causing havoc down the right wing and his quick feet and intelligent passing set up further Hurricane attacks.

Finnbar Scott was showing his versatility as he was playing in a slightly unfamiliar role at centre back but he looked like he had played there all his life such was his assured performance.

Indeed, not only was his defending first class but he also helped to set up the third goal. Scott took a booming goalkick and such was its’ ferocity that it found its’ way through to Herbert. Herbert took the ball in his stride and glided round the Bracknell keeper only to be brought down by the keeper himself when he looked certain to score.

Herbert brushed himself down and took the resulting penalty to make it 3-0 just before half time.

Bracknell came roaring back at the start of the second half though as the Hurricanes were put under sustained pressure. It took a very brave dive by Henley keeper Ben Horner at the feet of an onrushing Bracknell attacker to stop a certain goal. Horner was down for a number of minutes but the magic sponge did its job as the shotstopper bravely carried on.

Tom Bonser was at his flying best in the right back position, not only defending with great courage but also getting forward to support the attack whenever he spotted the opportunity. An injury to Winpenny meant that Ethan Holliday had to slot in at an unfamiliar left back role and he took to it like a duck to water.

The full backs were unable to stop Bracknell getting a goal back however as a very well struck half volley left Horner with no chance as the Hurricanes advantage was reduced to a two goal lead.

With their backs to the wall Joe Turner had to be at his defensive best to stop the now rampant Cavaliers. The midfield general commanded the area in front of the back 4 with great authority and helped the Hurricanes wrestle back control of the match. Tom Yeoman was also pivotal in shoring up the Henley defence as his combative and energetic approach made sure that Bracknell could not break through again.

As Bracknell pushed forward it meant that gaps appeared at the back and the Hurricanes were able to exploit this and put the game to bed. Herbert made a great run down the right and waltzed past two Bracknell defenders before reaching the goal line. He cut the ball back to Sam Robinson who had made a penetrating run into the heart of the opposition penalty area.

Robinson took one assured touch before blasting the ball into the back of the net thereby making it 4-1 and booking the Hurricanes a place in the final.

Managers Turner and Atkinson were said to be delighted by the result and were now looking forward to the final against a strong Maidenhead side.