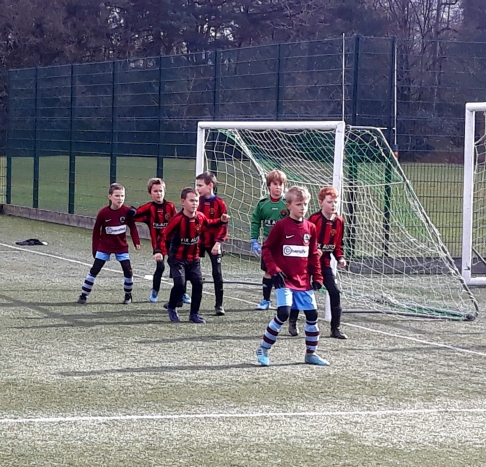 Last Saturday was the Henley Hurricanes U9s final game of the league season. Playing away against a strong Berkshire County Panthers side, the Hurricanes spent much of the game on the back foot. However the Hurricanes finished on top thanks to fine goals from Oscar Robinson and Will Goulden combined with a never-say-die attitude in defence and midfield.

Under heavy skies with the sun breaking through, the Hurricanes began brightly. Jake Thatcher was on target early on, and the ball was passed well from captain Dominic Ellis in defence to Oscar Robinson and then Nicholas Hernandez St Clair upfront. However, gradually the Panthers got into the game, turning the screw with successive corners. Goalkeeper Will Goulden was calm under pressure, collecting the ball assuredly. The Panthers presented a physical challenge but also moved the ball around quickly and accurately. In reply, the Hurricanes had chances to open the scoring but were made to defend.

The second quarter began much as the first finished. Both teams were hungry to get on top in the game. The Panthers were again pressing for a goal. Jack Tookey was defending effectively. Finally the deadlock was broken, and it was the Hurricanes who scored. Dominic Ellis put it a good pass to Shiva Vadhoolan, who took the ball to the right wing. His cross found Oscar Robinson in the box, who kept his composure to head the ball past the keeper. Conceding a goal seemed to galvanise the Panthers, immediately attacking the Hurricanes’ goal. However goalkeeper Will Goulden made a great save to deny an equaliser. The second quarter concluded with a typically powerful Jack Tookey strike being tipped over the bar by the Panthers’ goalkeeper.

The third quarter began with the Hurricanes on the attack. A great ball from Jack Callaway on the edge of the box found Shiva Vadhoolan, whose shot was narrowly wide. Shiva Vadhoolan was immediately in action at the other end, thwarting a Panthers shot by turning it onto the post, new goalkeeper Jake Thatcher smartly collecting the rebound. This began a sustained period of pressure from the Panthers which forced the Hurricanes to defend again. It yielded a goal from a break, a skilled move from the Panthers striker to round the defence and slot the ball home.

The equaliser spurred the Panthers on, and they pushed hard to take the advantage. Jack Tookey put in a superb tackle in front of goal to deny one attempt. The Hurricanes did have chances, Will Lindsay shooting just wide after a pass through from Shiva Vadhoolan. However, the third quarter ended with the Panthers on the prowl and the Hurricanes working hard not to concede again.

The final quarter began with the Panthers still hungry. For the Hurricanes, Will Lindsay, Oscar Robinson and Nicolas Hernandez St Clair worked well together in the Panthers’ box but did not score. The game was changed by a stunning individual goal from Will Goulden. He won the ball in defence and took it down the left wing, beating more than one defender before putting in a fairytale goal with a powerful shot which left the keeper no chance. The complexion of the game changed completely, the Panthers striving to score but opening up opportunities for the Hurricanes. Oscar Robinson had two shots on target in quick succession, but the Panthers keeper was equal to the challenge. The Panthers conceded a free kick on the halfway line which was taken by Will Goulden. The box was well staffed with hungry Hurricanes strikers, but he scored an amazing goal into the top corner and sealed the man-of-the-match award in the process.