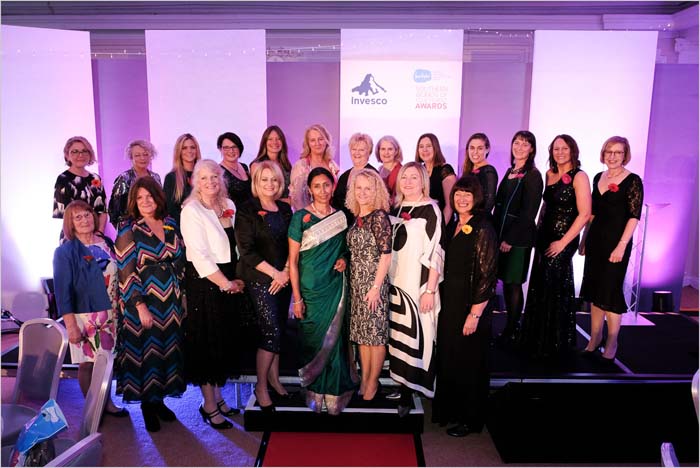 Inspiring women from across Berkshire, Buckinghamshire and Oxfordshire were recognised at the Sue Ryder Southern Women of Achievement Awards on Friday (13 March).

The ceremony, which took place at the Phyllis Court Club in Henley-on-Thames, was hosted by BBC Radio Berkshire presenter Michelle Jordan and Auctioneer Jonty Hearnden.

Awards were presented in a range of categories which celebrated the outstanding achievements of women in business, sport, community and public service. They were also awards to recognise women who have shown courage in the face of adversity, creative thinking and those who have mentored others.

Fern Haynes, Head of Hospice Fundraising at Sue Ryder South Oxfordshire Palliative Care Hub, said: “Our Southern Women of Achievement Awards 2020 were a fantastic success. It was such a very special event and it was so wonderful to see all of our nominees, winners, guests and sponsors on the evening. There are so many inspiring women in Berkshire, Buckinghamshire and Oxfordshire and the awards were a true celebration of their dedication, hard work and commitment. It was very humbling to be in a room filled with women who go above and beyond in their chosen field. Not only did we celebrate the success of these incredible local women but we also smashed last year’s fundraising amount, raising a phenomenal £67,906 which will support our services in South Oxfordshire.”

The event raised £67,906 for Sue Ryder South Oxfordshire Palliative Care Hub, which provides expert care and compassion to people aged 18 and over who are living with life-limiting conditions such as cancer, heart failure and lung disease.

Rose Grimond set up the Nettlebed Creamery in 2015 and has since then produced world-class cheeses which have won several awards and are now stocked by Waitrose. She provides employment for many local people and through working with HM Prison Huntercombe is involved with rehabilitation of inmates.

78 year-old Margaret has been a Poppy Appeal Organiser for The Royal British Legion for over 30 years in the Nettlebed area. She supports and raises money for the Poppy Appeal all year round and thousands of pounds has been raised thanks to her hard work.

When she isn’t fundraising she volunteers at the doctors surgery taking the elderly to their hospital appointments and helps at the old age pensioners coffee morning every two weeks. She is also a committee member of The Nettlebed Sports Association, helps organise the village fete and makes homemade cakes every week for the Nettlebed home cricket games.

Claire McIntosh is currently the Chairman of the Race Committee at Henley Women’s Regatta. She has been involved in the organising of the regatta for over five years.

Claire has been instrumental in leading a team that has revolutionised the competition structure within the regatta to become more inclusive and ensure the very best of racing across all levels of competitor from aspirational to elite. This has helped grow the entry to record levels in 2019 with more crews than ever entering this premier event.

Claire is completely dedicated to ensuring that the sport of rowing is accessible for all, giving up so much time across many aspects of rowing to ensure people can enjoy the sport.

Melissa volunteers with Street Pastors, an organisation which cares for, listens to and helps people who are out on the streets between the hours of 10pm and 4am. She has helped many people from getting home safely, to being a shoulder to cry on.

Melissa also volunteers at Bed for the Night, which allows homeless people to shelter in churches throughout the winter months, and has created a bereavement course for people who are struggling to deal with their loss.

Barbara helped to set up Reading Bladder Cancer Support Group after having bladder cancer herself. The group has gone from strength to strength and she regularly fundraises for cancer research. The group has made a tremendous impact and the members have gelled as a group to support each other.

Susanna is a pioneer in the British mum blogging space and founded BritMums, the UK’s original parent-influencer network in 2008. The network now boasts more than 9,000 social influencers, who create content on an array of topics including food, parenting, travel and politics.

She been named a top female entrepreneur and speaks frequently about blogging, social networking and the BritMums community at industry events. Her own blog, A Modern Mother, was nominated for the British Travel Awards 2019 and ranks in the UK’s top 10 Family Travel Blogs.

Tamsin is the leader of the Wargrave 1st Guides and has been involved in guiding for 53 years, starting as a brownie aged 7. She achieved the highest awards as a guide and ranger before joining the Army, where she served for six years.

She is described as a “dedicated leader who provides incredible opportunities” and “brings out the best in the guides, promoting independence, confidence and self-worth.”