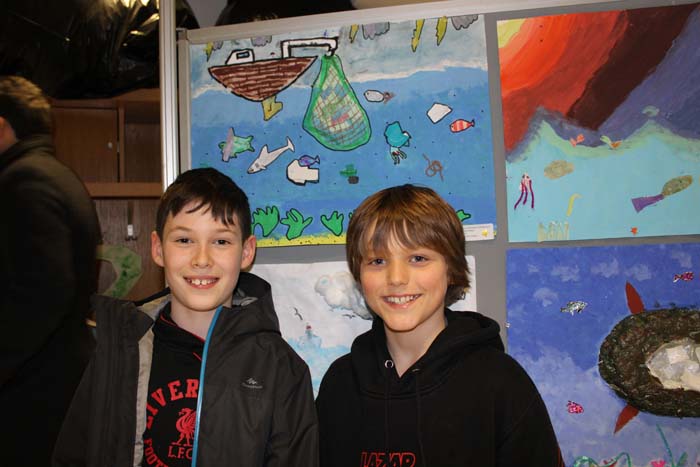 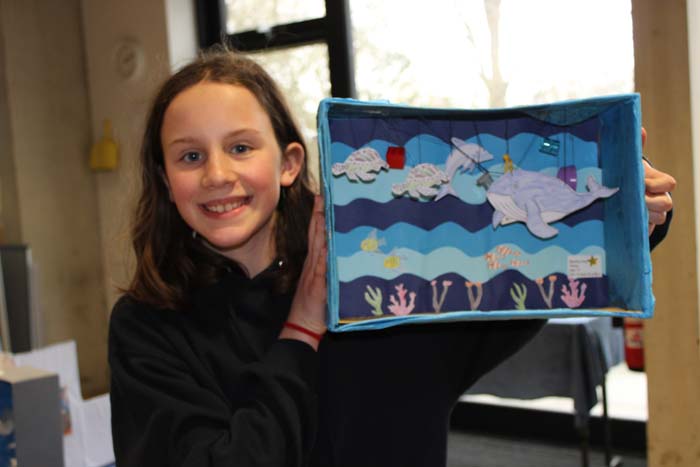 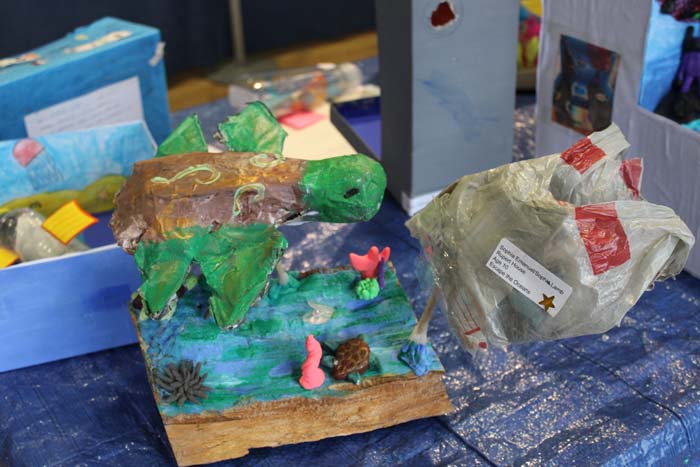 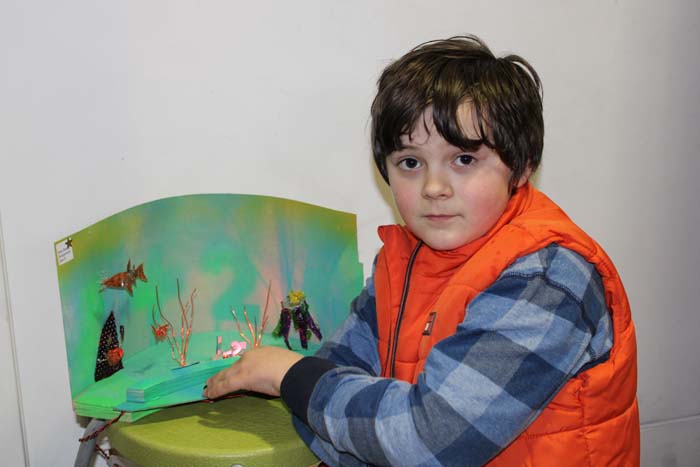 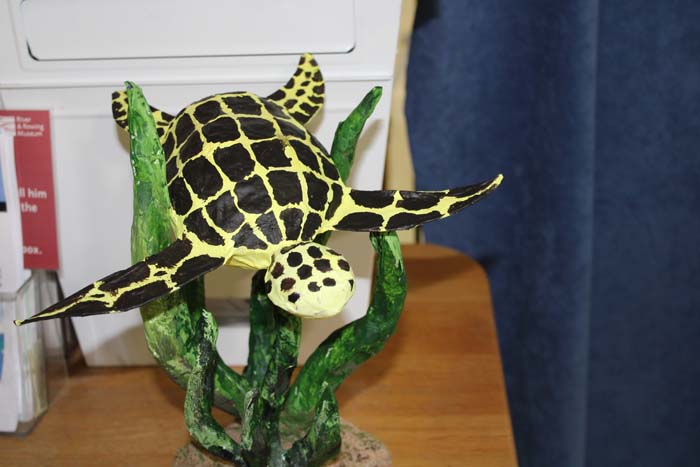 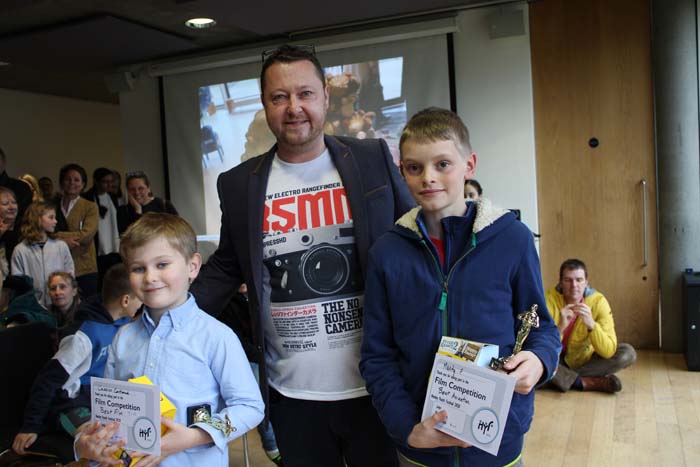 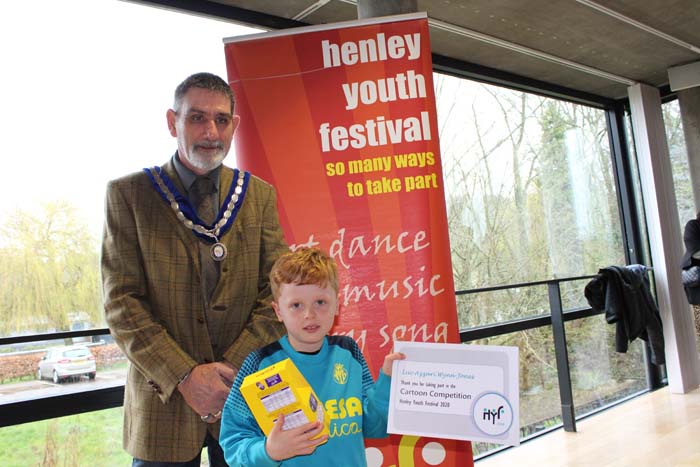 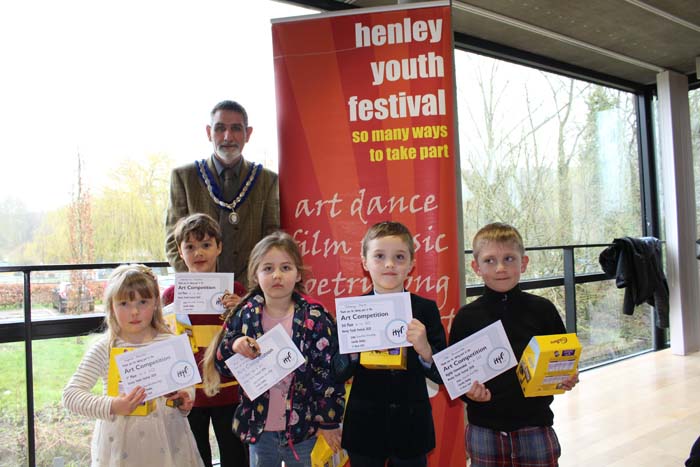 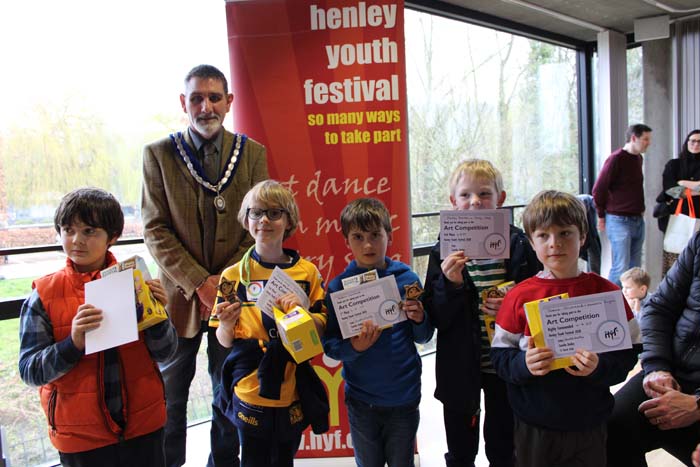 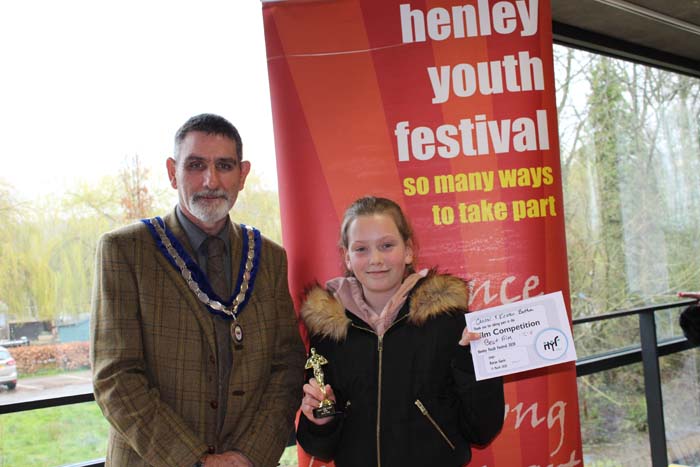 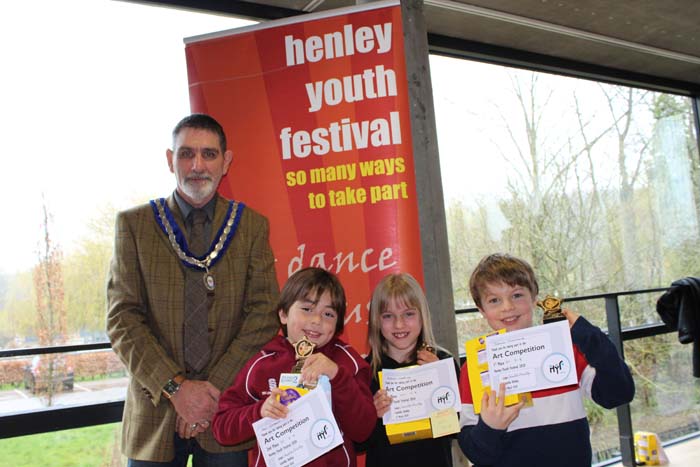 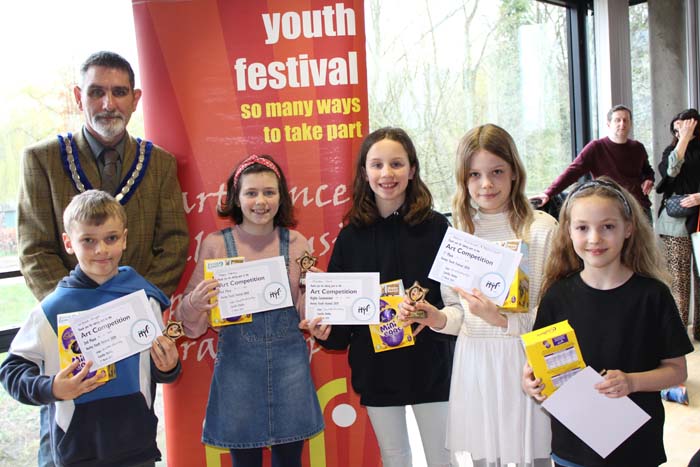 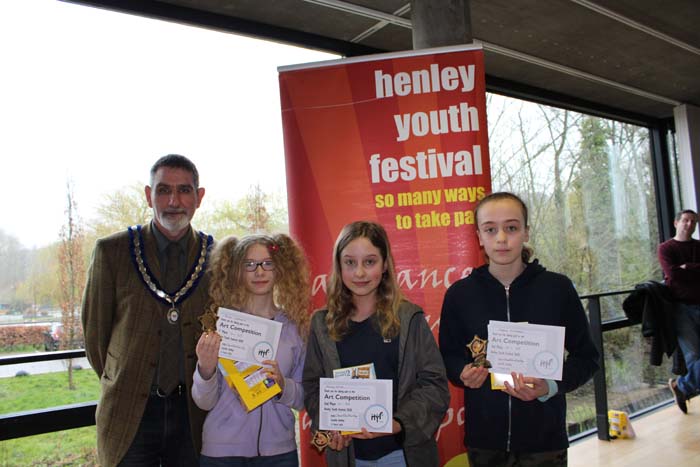 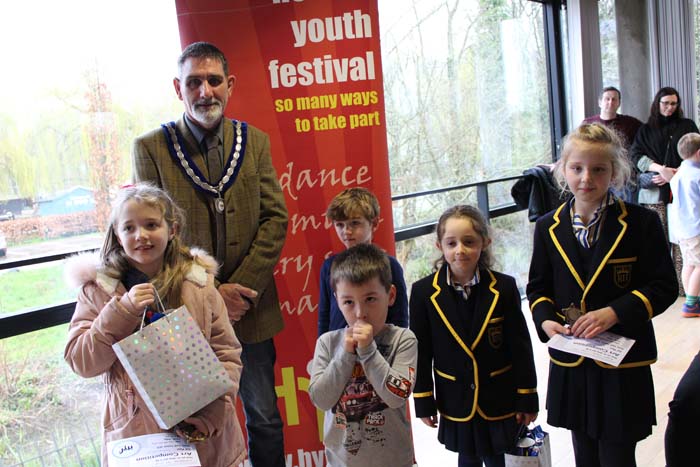 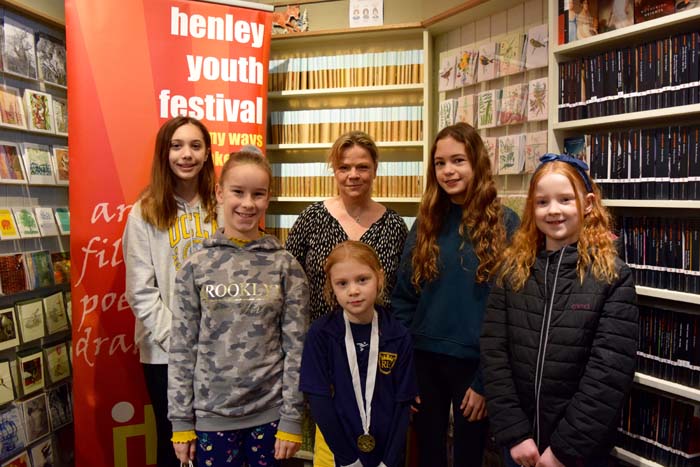 The ‘Oceans’ themed Henley Youth Festival writing, film, art and cartoon competitions inspired entries that included ocean creatures as well as the impact of plastic and climate change on our oceans.

Camilla Shelley, judge of the art competitions used the words “imaginative, inventive and clever use of materials” to describe this year’s excellent entries which were on display at the River & Rowing Museum last weekend.  The prizewinners of the top three entries in each age group along with those who were ‘highly commended’ were invited to a prizegiving on Sunday where they received a trophy, certificate and an Easter egg from Camilla and Deputy Mayor, Councillor David Eggleton.

Joint winners of the first Herald cartoon competition were announced too at the prizegiving which were Theo Hendry and Luc Azzari Wynn-Jones whose prize will be spending some time with the Herald’s resident cartoonist, Steve Allender next weekend to create a cartoon.  Editor Michaela Clarke said, “Theo and Luc’s entries were great comic stories and I’m looking forward to publishing the cartoon they create together for all the readers to see.  I hope it will encourage more entries next year.”

Kieran Gavin from The Living Room had the difficult job of judging the film entries this year.  Talking about Monty H’s best animated film Mermice and Seacheese Kieran said, “It had a fantastic array of hand crafted characters with a great parable of don’t mess with cheese, especially cheese.  Kieran liked Cassius’ original score she wrote too to accompany her film My Ocean Story which won the best film for in the 7-11 year category.  Connor Botha who filmed the official HYF film this year and last year, won the 12+ film category jointly with his sister Kirsten.  Kieran said, “Both Kirsten and Connor have shown a mature understanding of preparing and planning a shoot, allowing for 2 characters to interact with each other in one conversation bit filmed on different dates.”

This year’s HYF Writing Competition garnered a record number of entries with stories and saw a particularly high standard of entries this year, with local author and contest judge Amanda Jennings remarking that all shortlisted entrants deserved recognition.

The prize-giving was held in the Bell Bookshop on Saturday where Amanda handed out the prizes and gave each winner their own personalised feedback. Opening the ceremony, she said, “This is my eighth year of being fortunate enough to judge the Junior Writing Competition and I’m always delighted by it; I love it; it’s one of the highlights of my year. I think you all wrote absolutely fantastic stories. There was very little to differentiate runners up from winners. You’re all incredibly talented and it was utter pleasure to sit down and read your beautiful words and beautiful imaginations.”

In the Year 1 – 3 category, Rupert House student Alice Vernon won for her descriptive tale with its ever-so-tempting title, ‘Isabelle and the Evil Sailor with the Googly Eye’, and Trinity student Florence Irvine was Highly Commended for her dark and dramatic ‘The Fog Mouse’. Freya Hammond triumphed in the Year 4 – 5 group for her story-telling in ‘The Journey’, whilst Rupert House pupil Emily Trownce was Highly Commended for her exquisite language and imagery in ‘Colour Of The Underwater Reef’ (Amanda noted a particularly great description of a puffer fish as a ‘great golden conker’). The Year 6 – 13 category was so highly contested that two entrants were Highly Commended: Gillotts student Christobel Irvine for ‘The Siren Psycho’, a tale of a murderous mermaid which Amanda said was the darkest story she’d seen yet in the Henley Youth Festival, and Lottie Bradley for ‘A Girl Ringing A Bell’, a sensitive and carefully unravelled narrative around climate change and protecting our oceans.

Amelia Todd was the winner of the Year 6 – 13 category for her story, ‘The Mary Rose’ – a fictionalised version of a real battle on board Henry VIII’s warship. Amanda was impressed with the story’s evocative description and vivid imagery, balancing emotion with drama. Amelia, who hopes to one day write professionally, said, “I’m overjoyed that I won. I didn’t think I’d win because I’ve never won something before. I think this has given me the confidence to think that I can win and to try other competitions.”

Each of the winners and runners up were given a gift bag of books curated by the Bell Bookshop team, with a copy of a book by Greta Thunberg in every prize. Competition organiser Sarah Bell said, “They pick such beautiful books for the winners every year, but to have Greta Thunberg in every single one was the icing on the cake for me — the perfect gift and the perfect prize. Thanks to the Bell Bookshop, because we love it here and we’re almost here too much now. I can’t think of a better place to have our prize-giving.”