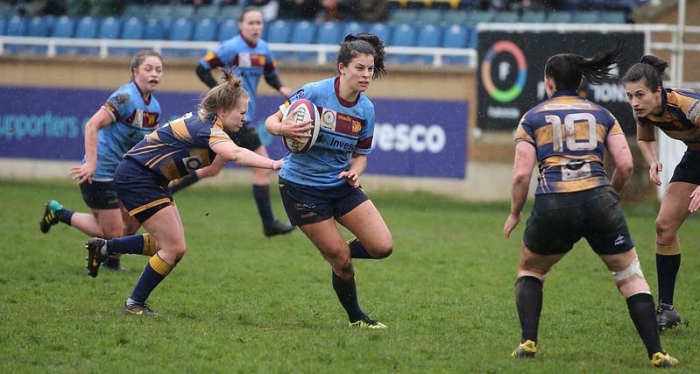 On Sunday 15 March, Henley Hawks women took on Loughborough Town women at Dry Leas in the third round of the plate competition.

Some late changes didn’t seem to affect the Hawks, who started the game brightly with early tries from Gen Moody and Jemma Thrip to put the Hawks ahead.  Some solid defence from the Hawks (sporting the blue away kit for the first time this season) kept Loughborough Town out, before releasing Moody to run in for her second try of the day.

The rest of the half followed in a similar pattern with solid defence from the Hawks, before Lini Kaufana rounded off a good period of attack to score her first. Kaufana shortly scored her second try before completing her hat-trick shortly before half time. However, Loughborough Town had the last say of the half, scoring a converted try to make the score at half time 36-7.

With an extended half-time due to an injury to Moody, both teams headed into the changing rooms to escape the rain and mud and try to warm up. Loughborough Town kicked off the second half, trying to pin the Hawks deep into their own half.  However, the pressure didn’t last long, with a bit of individual brilliance from Kaufana collecting her own kick and offloading to Chloe Baker to sprint down the wing and score the Hawks 7th try of the afternoon.

The Hawks pack were dominant throughout the second half, turning over Loughborough during scrums time and carrying hard around the pitch. It was then time for the forwards to get in on the try scoring action, with Shannon Loney taking the ball at pace to smash over the Loughborough try line. Quick reactions from Katie Phillips allowed her to pick the ball up from the back of a ruck and dive over the Loughborough try line for Hawks last try of the afternoon.

Credit must go to Loughborough Town who didn’t stop testing the Hawk’s defence, despite depleted numbers as the game went on, threatening the Hawks try line during the closing stages of the game. However, solid pressure from the Hawks defence forced the Loughborough knock on, bringing the game to a close with the final score at 55-7 and continuing the Hawk’s unbeaten run in the plate competition. A mention also to Emily Bagguley for converting five of the Hawks tries in pretty horrible kicking conditions.

Players player went to Anne-Marie Shrimpton coming back from a nasty knee injury to be a menace at ruck time all game, as well as running some great lines in attack. Coaches player went to Phillips for her work-rate and tenacity around the pitch from minute one to eighty.