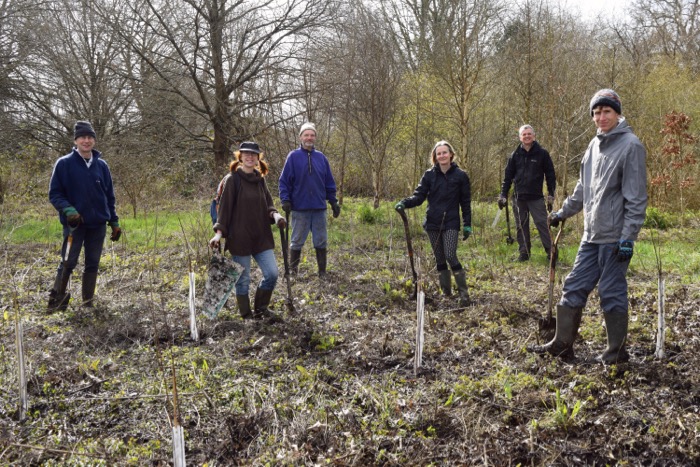 The Greener Henley Tree Planting Group have achieved their campaign target of planting 500 new trees this season. Between Wednesday and Saturday last week, a handful of volunteers planted over 150 trees on council-owned land as part of ‘Trees for Henley’, a local initiative to combat climate breakdown. The project runners are hoping to plant 1,000 new trees each year to help capture carbon from the atmosphere and draw down pollution levels.

The tree planting season had been delayed due to flooding leaving the ground waterlogged, but the group finally managed to conclude their planting season on Saturday, having planted 40 trees on Wednesday and a further 80 on Friday. Friday’s volunteers – Graham Woodgate, Jean Oliver, Patrick Fleming, Chris Bond, Josh Mica, Catherine Woodgate – donned their wellies to plant in a muddy area towards the back of Marsh Meadows.

The species of tree were carefully chosen for each location, Patrick Fleming explained. “We don’t just plant trees everywhere,” he said. “We’re quite careful about the type of trees we plant; these are all willows and alder and hawthorne so they’re all local trees and they are trees that will grow in bogs. We don’t want to have this completely dry out because it will start to release carbon dioxide, so it’s doing things in a meaningful and thoughtful way so that we don’t make the problem worse, which human beings are awfully good at.”

The new trees planted in Henley will capture carbon from our atmosphere, a critical measure in tackling the climate emergency. Patrick said, “We can reduce our carbon footprint by not flying, by choosing what we eat, by driving less or driving a vehicle that is more economical and ultimately an electric vehicle, by sourcing our energy from wind and from solar. That’s lots of things that we can do personally to reduce our carbon footprint. When we cut down to the nitty-gritty, you end up using carbon, whether that’s in the goods that you buy, plastics, or making steel and making things. That last 10% is just too difficult, but you can sequester that by planting trees. The trees will take the carbon dioxide out of the atmosphere; they will reduce the problems we are already facing.”

The Trees for Henley initiative was launched at the Greener Henley Festival last November. Volunteers from local climate activist group, Greener Henley, are collaborating with Henley Town Council and the Climate Emergency Working Group to plant as many trees in Henley and the surrounding area as possible. Throughout last summer and autumn, Greener Henley gave away trees for people to plant in their garden, and have since teamed up with Town and County Councillor Stefan Gawrysiak to take on even more ambitious projects. Using a £500 grant organised by Councillor Gawrysiak, a £250 gift from a benefactor, and a further donation from Henley in Bloom, Greener Henley have been able to plant over 500 trees in various locations around town, and are already planning for the next planting season in autumn. Through the scheme, they intend to plant 10,000 trees over the next ten years.

Patrick Fleming stated, “We’re looking for land — that’s the big appeal — we’re looking for land where people are interested and keen to plant trees and we will come and help. The bigger picture, for climate change, is half a million trees. That’s a lot of trees. Break that down, over the years, that’s 50,000 trees a year. That’s still a lot of trees, and that can only be done in collaboration with landowners in the area. It could be people over in Peppard, Greys, up to Nettlebed – anyone who wants to get in touch and is interested in exploring a project, we will look at grants and sourcing the trees and volunteers to help.”

Despite the ambitious tree planting target, the half a million new trees would only account for 10% of Henley’s current carbon emissions, urging the importance of further action against climate breakdown. Greener Henley are constantly striving to bring attention to the crisis and how we can all make conscious changes for the benefit of the planet. “There are lots of things that we are doing,” Patrick said. “There’s a plastics campaign, there’s an air pollution campaign, there’s just spreading the word and getting people to reduce their own carbon footprint. Even if my carbon footprint is about six tonnes of carbon dioxide per annum, it’s not a huge one because I don’t fly anymore, but can I get that down to five? Can I get that down to four? When you get down to two it starts getting a bit hard, so then you think should I be out there planting trees or should I buy a bit of land? Different people can do different things: some people can volunteer with their hands, some people can volunteer with their heads, brains, and some people have a bit of money and can afford to buy a bit of woodland and to do their bit. Each of us has a role to play, however large or small, and what we’re hoping is that people will do that.”

If you would like to help in the Trees for Henley project, whether by planting a tree in your garden, using your land for a number of trees, or getting involved with the planting, contact Patrick Fleming via email: flemings5@googlemail.com