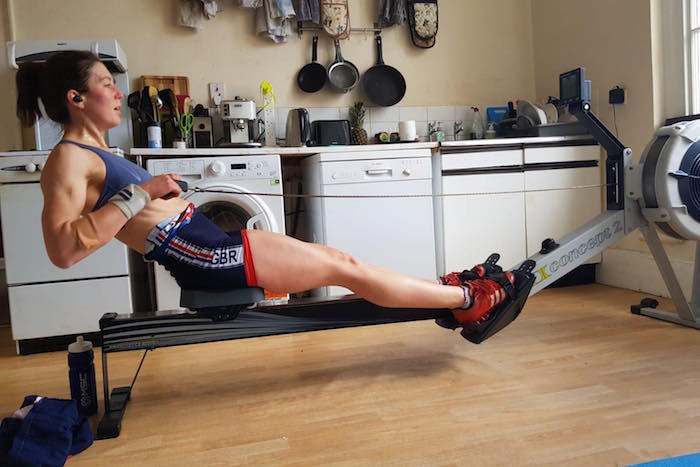 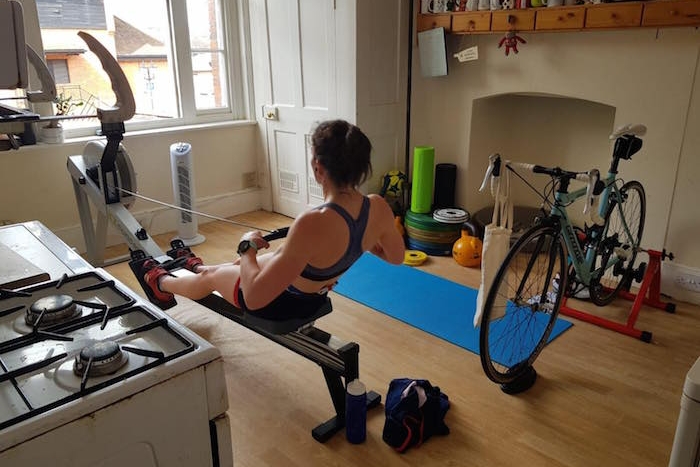 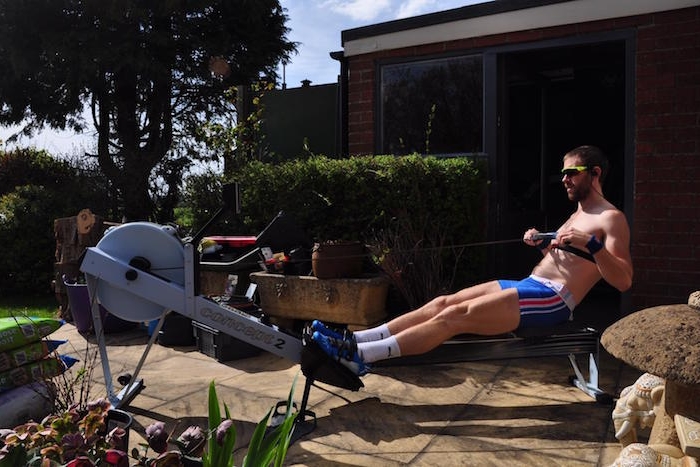 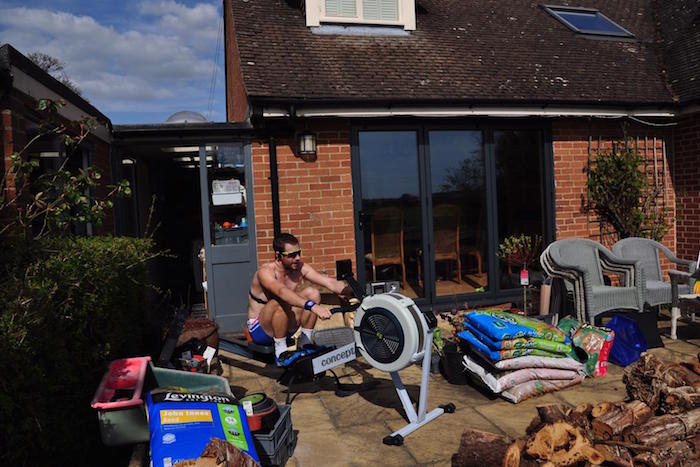 Though this year’s Henley Royal Regatta has been cancelled and the Toyko Olympics have been pushed into 2021, local rowers refuse to be defeated by the coronavirus pandemic. Leander Club and the GB Rowing Team athletes are facing the crisis with the characteristic resilience of top level sportspeople, continuing to training in isolation despite the current challenging circumstances.

Leander Club were quick off the mark in preparing their athletes for lockdown, distributing equipment amongst the rowers before the current social distancing measures were announced two weeks ago. Director of Rowing and Chief Coach Mark Banks stated, “It didn’t take a rocket scientist to know that things would have to get to a lockdown. We were pretty organised. Before the lockdown came, we distributed ergos, bikes and weightlifting equipment. Since then, each athlete has been given a dedicated coach who will speak to that athlete every other day to make sure that their wellbeing is okay.”

The Leander rowers’ mental health, Mark Banks explained, is of paramount importance to the coaches during this crisis which has provoked a total upheaval of the racing calendar. Having spoken to a number of athletes since Leander Club closed its doors two weeks ago, he said, “I was quite concerned about a couple of them, but I’ve spoken to them twice since and their morale is much better. It was a shock, in particular for people who were going to the Olympics for the first time and for the athletes at Leander who were looking forward to Henley Royal Regatta.” Mark continued, “A lot of them were down and despondent, understandably. It’s not that they disagreed with the decision; they totally support the decision. It was more to do with the fact that they’ve had these goals for a year and all of a sudden they’ve been taken away from them. They understand that they’ve got to keep other people safe, and it’s still a setback.”

Moving forward, the team at Leander Club are trying to conduct some virtual training sessions, organised by Leander athlete and Olympic silver medallist, Vicky Thornley. They hope to then progress to virtual racing, though Mark Banks is cognisant of the toll this could take on the rowers’ health. He said, “One’s got to be aware that if you overwork the athletes too much and too long, it suppresses the immune system, and this virus attacks the immune system. We’ve got to be incredibly careful about how much intensity they do and for how long. The most important thing is the wellbeing of the athletes and the coaches, and giving them enough communication where they feel they’re getting the support they need, not just in their training, but in their mental wellbeing.”

The GB Rowing Team have taken a similar tack in providing each of the athletes with an ergo for their training. GB Rowing Team athlete Emily Craig, who lives in Bell St with GB para rower Giedre Rakauskaite, has managed to maintain some semblance of normality within her day by transforming her kitchen into a gym. She explained, “We’ve got an ergo in there, we’ve got my turbo, and we’ve got some weights that Giedre got given as part of the para-team. So we’ve actually got enough for my training to be fairly normal. On a day to day basis, other than the fact that we’re not at Caversham, it’s pretty standard and pretty normal which has been kind of nice.”

Retaining some structure in her training, Emily reflected, has been invaluable in remaining positive despite the news about Tokyo. “There was a danger when the Olympics was postponed and everything got cancelled and the season, in a way, ended, to just lose all sense of direction,” she said. “For me actually having a programme and feeling like I’ve still got purpose has helped me settle into it a bit quicker. Now we have new dates [for the Olympics], we have more of a longterm plan and can deal with it.”

Speaking about her reaction to the Olympics Games postponement, Emily expressed, “It wasn’t a shock. It was really tough but expected. It’s just getting round how quickly everything changed and going from pretty much being selected to deselected, and knowing that it’s going to carry on for another year is probably the hard part. Not that I was definitely going to retire, but I was ready to potentially move on next year and start a new chapter, and this year, to get to do this thing that I’d been dreaming about since I was 12, and now it’s just back a year. That’s the worst bit, but equally, it’s not like I’m missing out on life right now! And you’d hope in a year’s time I’ll be a stronger, fitter athlete.”

Fellow GB Rowing Team athlete and Henley resident, Jamie Copus, has been struggling to adjust to the new normal, particularly after having contracted a suspected case of COVID-19. Thankfully, Jamie only experienced mild symptoms and has since made a recovery, although he is wrestling with the impact of the pandemic on his training. He stated, “Especially with me being ill last week, morale was pretty much zero, and with the Olympics being postponed and Henley being cancelled on pretty much the same day. I’m trying not to think about it. Morale has been pretty low, but we’re on a more flexible programme at the moment so we can do some training that benefits us. I can work on my shoulders and work on some areas that are weak, and being in the thick of it every day you don’t really have time to do that.”

Jamie also expressed concern for the junior rowers at Henley Rowing Club, whom he coached in the Fawley Cup at last year’s Henley Royal Regatta. “They’re a bit down,” he said. “We’ve given them some structure and some training. I’m working with some of the guys individually because a bit like me, they want to work on some weaknesses, so I’m setting them up with a bit more of a personalised programme to give them a sense of working towards something.”

Sam Mottram, the GB Rowing Team and Leander athlete who was hoping to race the Lightweight Men’s double this season with Copus, has faced similar challenges to his teammate in adapting to individual training. “It’s very different,” Sam said. “It has a mixture of positives and negatives. On the good side you can train when you want, you’ve got flexibility in how you train to some degree, and it’s quite pleasant being able to erg in the garden with nature around you – training at your own pace in your own setting. On the downside, with the uncertainty of everything going on, it can be hard to keep yourself motivated, and although it hasn’t necessarily affected the quality of the training I’ve done, it doesn’t help with the overall enjoyment of it or the team mentality.”

Sam has been quick to shift his mindset in the wake of the Olympics’ postponement, maintaining some of his daily routine to keep focused. Much like Emily Craig, he has found the structure of training to be helpful in approaching each day. Sam conveyed, “Although the actual day doesn’t look anywhere near the same in terms of fixed structure that we have at Caversham, it’s still quite easy to keep good habits: wake up at a fixed time and have an alarm, have some quiet time at the same point. The actual training itself is quite good because it gives you a reason to get out of your pyjamas and get into your training kit. It’s quite a solid, fixed thing that you have to do in the day, and then when you come out the other side of training you have to get dressed into normal clothes.”

Though the 2020 rowing season has seen a world wind of cancellations, Sam speculated that it could be an opportunity for his team, or for any rower, to grow. He mused, “When you’re training, you’re always training as part of the squad, and you’re always pushing yourself towards the next target, whether that’s a half hour test on a rainy Wednesday or an Olympic final. When you actually stop and train by yourself, you learn what kind of person you are during individual training, which isn’t normally an opportunity that presents itself. It’s an opportunity to settle down, train in your own time and figure out what kind of athlete you are. What motivates you — the team or yourself? Where does your mind go on the ergo when you don’t have someone else’s playlist in your ears? Training on your own in isolation, especially when you haven’t seen your friends, your teammates, your coaches, is a great opportunity for understanding. If you, me, anyone can harness that, and take that forward when we go back to training in the squad, it can only be an asset to the overall team.”