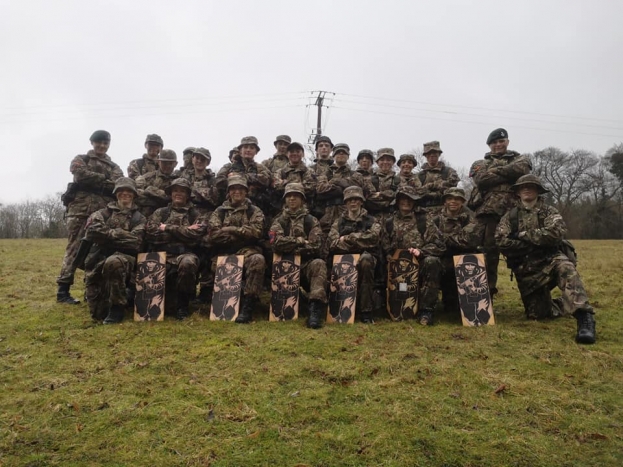 With the current global situation, the Army Cadet Force had to cease training. However, this didn’t stop Major Thrussell (South Oxfordshire’s Company Commander) and his second in command, Capt Fearn from wanting to continue the delivery of effective training to all the cadets in South Oxfordshire.

Almost immediately after the detachments were shut down, a plan was underway to try and work out how to deliver training to the cadets from the isolation of their homes. Soon after, plans were made to train the entire of South Oxfordshire Army Cadet Force, with video conference calls.

The third virtual parade night held on Wednesday 8th April saw over 110 cadets and adult volunteers tune in. AUO Mel Haynes (Henley Detachments Commander) took lead in delivering a lesson of Patrol reports to the senior cadets. While the more junior cadets were given training on camouflaging themselves, to prevent being seen by enemy forces when out on patrols.

AUO Mel Haynes said “Delivering the training to the cadets via video call is completely new to all the adults. However, the training is still effective and fun!”

Henley’s most senior cadet, CSjt Ashleigh Poolan thought “the training is still as exciting and simulating as before, if not better. All the cadets are complimentary about it. I can’t wait to learn more.”

The Senior Cadets of Henley have been supportive by making tutorial videos and PowerPoints for online learning platforms for other cadets. The Henley army cadets will continue their online training with a Online Fieldcraft Training Day at the start of May.

The Army Cadet Force is a national youth organisation sponsored and supported by the Ministry of Defence. For 12-18-year olds, designed to deliver challenging and varied training based on military themes and concepts. Henley parade every Wednesday from 1900 to 2130 at the Drill Hall on Friday Street. We would love for new Cadets and Adult Volunteers to come visit us and experience something new once we re-open for normal training.