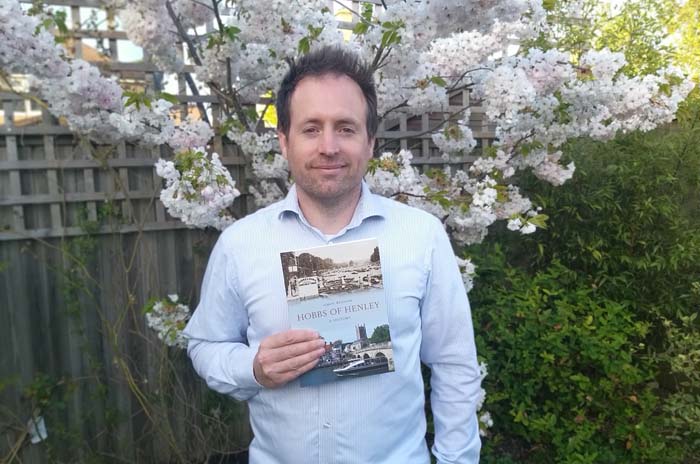 Henley folk missing the joy of boating on the river can take a dive into the history of Hobbs with the new book, ‘Hobbs of Henley: A History’. The book, written by Dr Simon Wenham, chronicles the Hobbs family’s association with the river, dating back as far as 1621. Released to mark Hobbs of Henley’s 150th anniversary of business, the book is a wonderful commemoration of one of Henley’s most notable institutions.

‘Hobbs of Henley: A History’ charts the beginnings of this esteemed family firm, founded by Harry Hobbs in 1870. In 1871, Harry took over The Ship pub on Wharfe Lane, and likely rented out punts before expanding to rowing boats, electric launches and steamers. The business was perfectly placed for growth at a time when tourism in Henley was taking off; the station’s opening in 1857 had increased footfall to the town, and travelling on river was also increasing in popularity. The book reveals that there were 12 competing boat companies in Henley in 1896, but Hobbs managed to surpass them all by innovation, astute property investment, and having enough heirs. The company’s long history in boat building and passenger boat services is carefully detailed in Wenham’s writing, from establishment to present. Now, the company has over 50 hire craft, which can be spotted cruising along the Henley reach on any given sunny day.

More than just a history of the family business, the book also connects Hobbs to many key moments in Henley’s recent history, including the Henley Royal Regatta, local politics, war-time events, and other interesting stories. Just one example of the tales told in the book is the that of a crash of a B-17 bomber near Wargrave in 1943 (witnessing it was one of Tony Hobb’s first memories of working on the river). The book also tells of the many rescues the company has been involved with, including children falling into the water, a horse getting into trouble, cars driving into the river, boating accidents and even people being attacked by swans!

‘Hobbs of Henley: A History’ notes the many famous clients of the firm over the years, including (but not limited to) George Harrison, Maggie Smith, Charlton Heston, Gene Kelly, Steve Redgrave, Matthew Pinsent, Liz Hurley, Russell Brand, Zoe Ball and Fatboy Slim, and Barbara Steisand. One particularly memorable old photo in the book shows Princesses Elizabeth and Margaret attending the Henley Royal Regatta in 1946 on the umpire launch Enchantress, built by Hobbs in 1913. The skipper is Laurie Truss. Tony Hobbs is behind him, and Dick Hobbs is holding the rope.

The Hobbs family themselves are integral to the history told in the book, which author Simon Wenham has not forgotten. The Hobbs are a prominent Hambleden family that can be traced back to the 15th century, and a fascinating discovery by Dr Wenham shows their first connection to the river began in 1621 when the family rented Burrow Farm in Hambleden (this involved running the Mill End Wharf House). Dr Wenham also writes about the many family members as individuals, from Bill Hobbs’ remarkable life as a local councillor, magistrate and Mayor of Henley (which he resigned in his 50’s to fight in WW1), to Tony Hobbs’ MBE for services to the town, current MD Jonathan Hobbs’ involvement in numerous Henley initiatives. The book also includes a family tree, so no Hobbs goes unmentioned!

The author of ‘Hobbs of Henley: A History’, Dr Simon Wenham, is a part-time tutor at Oxford University’s Continuing Department, specialising in Victorian history. He was previously worked on the river for the Oxford firm of Salter’s Steamers and did his DPhil on the firm, which was turned into the book Pleasure Boating on the Thames: A History of Salter Bros, 1858 – Present Day.

Jonathan Hobbs commenting about the book said, “As a family we had discussed for a number of years the possibility of writing the history of the business, with my Mum wanting me to write it! Luckily for me, Simon approached us, and we were aware of his other books on the Thames, and knew he had a real passion for river history and a flair for discovering so much more than we even knew. The plan was to launch the book this year in our 150th year, which we will hopefully do later this year, but Simon has discovered a 400 year anniversary in 2021 – of our working history as Waterman on the Thames at Henley, so we may extend the celebrations.”

As most shops are currently closed, you can order the book online from Amazon at https://www.amazon.co.uk/Hobbs-Henley-History-Simon-Wenham/dp/1445696606 priced £10.34 or Kindle edition £12.00