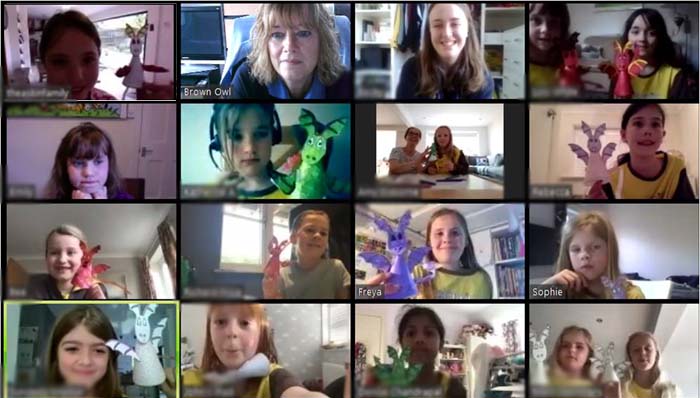 With schools going online and many other organisations now turning to virtual meetings, 1st Henley Brownies are no exception and held their first virtual meeting last night to celebrate St George’s Day.

The Brownies enjoyed making a dragon, going on a scavenger hunt to find items that began with the letters that made up the word dragon and an English themed quiz.  They all disappeared quickly to find the things the fastest and came back with an amazing array of items including their dog, nuts, rainbows, oranges, nail varnish, rulers, guinea pig, artwork, oats and owls!

The Brownies also shared some things they have been doing in lockdown which included Madeleine Chandrapal showing her invention she had designed for an automatic pencil writing machine for when you get too tired of writing for her Invention badge.

Brownie Leader, Michaela Clarke said, “I was a bit nervous about doing this for the first time and wanted to make sure it would be fun.  It was so lovely to see their smiley faces after such a long time.  There’s only certain things that you can do online.  The Brownies are used to playing lots of games running around together and at this time of year we would be doing lots of outdoor things altogether like building dens in the woods and toasting marshmallows on a fire.  It was lovely to see their creativity in bringing their dogs and guinea pigs for the scavenger hunt.  I thought some might bring their Dads for the d!”

The Brownies ended their meeting singing Brownie Bells with a change of wording which instead of “go home safely”, they sang “stay home safely.”