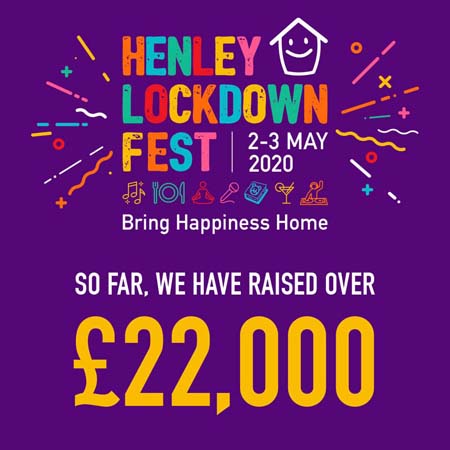 48 hours of entertainment that included fitness classes, cookery workshops, interviews, magic and live music was all brought to homes over the weekend as part of the first Henley Lockdown Festival raising money for the NHS and Riverside Counselling.

Former Olympic skier and TV presenter Graham Bell hosted the festival throughout the weekend and interviewed F1 legend Ross Brawn on Saturday.  The festival was organised by Jayson Jaurigue (JJ) of Eight Ray Music in Henley. Graham was challenged by 5 local businessmen to do press-ups for a donation.  They donated £5 for every press-up he did over 35!

Later on Saturday, Natasha Hamilton, from Atomic Kitten performed from her home in Chester with her dog Lola.  She entertained the audience with some classic Atomic Kitten hits, Eternal Flame, Last Goodbye, The Tide is High, and You’re The Best Thing That Ever Happened to Me by Dean Martin.

Food and Wine were on the festival menu too. Tom Westerland from Crockers of Henley entertained with a Saturday version of Kitchen Live, Paul Clerehugh from the Crooked Billet showed viewers how to barbecue a rump of lamb, make a Mediterranean sauce to go with it and how to make a chocolate cake out of Easter Eggs. Afterwards Paul said, “Thanks for watching me get my knickers in a twist.”  Later on Sunday Alistair Cooper who is a Henley-based wine writer for Decanter Magazine hosted a wine tasting session.  On Sunday Shaun Dickens from Bistro at the Boathouse cooked buttermilk fried chicken with pickled slaw, Jersey Royal potato salad and ranch dressing.

Bertie Slippers entertained the children on Sunday morning with magic, songs, dancing and an appearance from naughty Graham the crayon.  We loved his Chase from Paw Patrol drawing which magically stuck his tongue out, moved his eyes and spoke!

We were looking forward to Family Fortunes hosted by local legend Bobby Davino on Sunday evening who asked families questions based on the answers of a 100 people in Henley which included something people close, something people fill up and our favourite a method of escaping from prison – which the second top answer after tunnel was Chiltern Taxis!  It was a shame that the four families competing weren’t from Henley but as far away as Dewsbury and Ashby de la Zouch?!

One of our highlights was the interview with Ross Brawn who said “I got into F1 when I saw my first job advertised in the Reading Evening Post for a machinist at Williams.  I learnt so much from Frank Williams.”  Talking about working with Michael Schumacher, he said, “He was an exceptional sportsman, he had his faults but he was hugely committed and want to win.  He couldn’t stand losing.”

There was another sports interview on Sunday with England Red Roses players, Rochelle (Rocky) Clark and Tamara Taylor who formerly played for Henley Hawks.  They were interviewed by Chris Evans, CEO of Rugby Centurions and shared some great stories from their time at the Hawks.

There was lots more music on Sunday with sets from Ben Lee, Etham, Adam Isaac (from The Voice), pianist Okiem, and JG Collective (JJ).  Adam wrote and performed a special Henley Lockdown Festival song Bring Happiness Home with the music video being played throughout the weekend.  It was agreed that when the target of £20,000 was smashed the person performing would then appear in their underwear.  We’re sure the audience were delighted to see the very good looking Adam strip down to play his guitar! (see photo below)

Both nights finished with an amazing DJ set from Jamie Taylor (Saturday) and Ben Ofoeduo (Sunday) who closed the festival.

JJ said, “We smashed the target of £20,000 and raised £22,000 and still going up.  Thank you, thank you, thank you to everyone who donated.  Thank you too to all the people that took part, the team and the sponsors.  I think we achieved the two goals we set out, which was to bring happiness home and to raise money for the NHS and Riverside Counselling.” 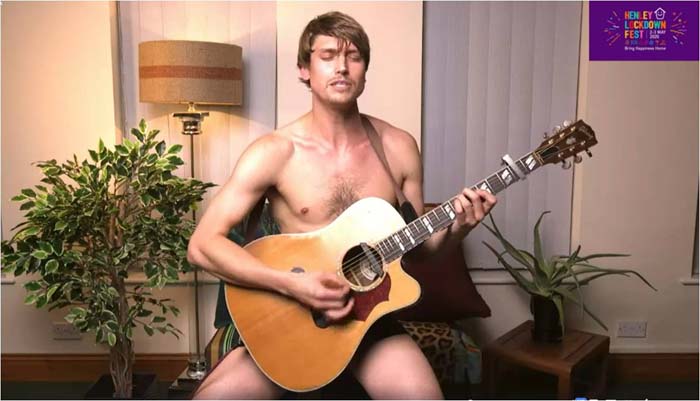