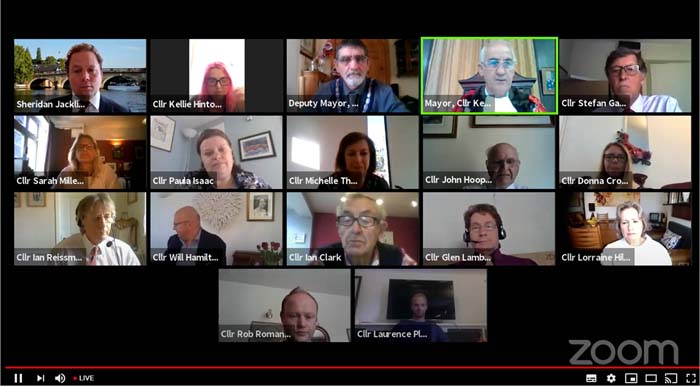 Councillor Ken Arlett was elected to continue as Henley Mayor this morning in these unprecedented times.

Councillor Stefan Gawrysiak proposed that Ken continued in the role.  He said, “Clearly we are in unprecedented times and we have decided to make the decision to ask Ken, Councillor Arlett to continue for a further year. Henley-on-Thames is currently under  lock down with the clear message of social distancing and we need a Mayor with experience and great leadership skills to navigate the coming months.

In the current climate it would be unfair to hand over to someone that had not been Mayor before because we need an experienced hand on the tiller.

Recently because of Covid 19 I have witnessed Ken at Town, District and County level quietly behind the scenes engaging with the leaders and officers of the District and County councils to ensure that services to the residents of Henley continue. Cllr Kellie Hinton also behind the scenes has ensured that services continue and the vulnerable members  of our community are looked after.

Therefore this is absolutely the time where continuity is most needed. Ken has shown that he has been a tremendous Mayor for the past year. He has shown, dedication, leadership, fairness and friendship to all residents, councillors and officers.”

Councillor Will Hamilton said, “Henley is metaphorically on its knees. It is crying out for leadership from the Town Hall, working in partnership with local commerce and influencers. It needs an urgent road-map for business rejuvenation, one for the staff to follow. Out of principle, I will not be supporting this proposal, I have never supported a Mayor that wishes to stand a second term or consecutively. Surely there must be someone new in HRG that wants to take up this honour and give the council fresh energy, leadership, creativity and impetus. I will be one of your biggest supporters if you get Henley to stand up from its knees in the coming year. Mr Mayor, I shall be monitoring your efforts with my usual zeal, I will never give up, nor despair. And I will give credit where credit is due. However the jury – the electorate is still out. I am not going to turn this into a political showground. And I will leave this proposal as is.”

Councillor Donna Crook said, “I’d like to thank Ken along with his wife Dorothy for being a fantastic Mayor and Mayoress.  Ken has been really efficient in his role. Ken has a great wealth of knowledge and you can always approach him if there is something that you don’t know, he will always have the right answer.  This is not the first time Ken has been Mayor but sadly with this unprecedented times we are living in he has had to end the year virtually. The next Mayor has a lot to live up to, so it seems right that we have Ken carry on as Mayor along with Dorothy to continue his good work, along with Dave & Nicola carrying on as Deputy Mayor & Mayoress who also has been working really hard and is a very visible figure in the town with his ‘high viz jacket’ and also working particularly hard in lockdown getting food to those that need it.”

Councillor Kellie Hinton added, “Ken and Dorothy, supported by Dave and Nicola, have served Henley fantastically over the past year. Nobody could have predicted how this civic year would end and in many ways it is a great shame as we have seen many events and special moments cancelled, while others, such as this meeting have moved online.  Those who know Ken and I well, will know we tend to disagree sometimes, but what I know about Ken is that he is a loyal servant to this town and a strong leader. Along with his wife and his faithful deputy mayor, he has worked hard as our Mayor, yet never stopped campaigning and working as a district and town councillor. For those reasons and many more, I second this vote of thanks.”

Ken said, “As I said at many functions, the two words I used most was ‘thank you’ and I’m going to use these over the next 5 minutes.”  He went on to thank many Councillors, Sheridan Jacklin-Edward (Town Clerk), Henley Town Council Senior Managers, Leena Wisley (his PA) and residents who sit on Council Committees. Ken enjoyed lots of functions and events as Mayor last year including “the wonderful evenings of the Living Advent Calendar expertly organised by Richard Rodway.” Ken then went on to highlight the things that the Committees have achieved over the last Mayoral year which have included refurbishing Freemans Meadows playground, winning more Britain Bloom awards than any other town in the region, winning planning appeals against the Care Home on the old Youth Centre site and over-development at The Hub in Station Road, installation of the 20mph zone and the zebra crossing on Greys Road.  He thanked residents Tony Hoskins on the Climate Emergency Group and Patrick Fleming who is on many committees and working groups. He said about Patrick, “Patrick is someone who stands out like a beacon, Patrick’s dedication and knowledge is second to none.” Ken finally thanked his wife (Dorothy).  “I have to say at the start of the Mayoral year there was a little hesitation, given her 3 days notice of being Mayoress again, but as we were so well received wherever we went, she grew into the position, and I have to say really enjoyed herself. The only disappointment was having helped organise the Mayor’s Civic Dinner with Leena and then had the function cancelled when social distancing became the rule.”

After being elected Mayor, Ken talked about the future. He said, “The first priority of the Council will be to support all of the shops in the town as best we can, once they reopen their doors. Helen Barnett the Town Centre manager has already helped to set up the ‘Henley Basket’, where people can buy online from local shops. Details are on the Town Council Website. Myself, Stefan and Kellie are trying to persuade SODC to give a one hour free parking for shoppers on all their car parks in town. We will need to put our energy into the local bus service and get more people to use it. At present it has been totally under used by residents. Work on this is currently taking place by the Bus Working Group. We will carry on working with OCC and SODC on the decriminalisation of on street parking, so that Henley Town Council will act as an agent to enforce this in the future. Our local sports clubs and associations in the town may well need to speak to the Town Council for support. We will also have to offer more support to the River and Rowing Museum. All that said, Income from the town councils car parking, buildings and investments will be down due to the Coronavirus, tough decisions will need to be made to balance our books.”

Councillor David Eggleton was then proposed by Ken to stay as Deputy Mayor.  He was seconded by Councillor Ian Reissman.  He said, “I would like to second the proposal for Cllr Eggleton to be deputy Mayor for 2020-2021. Dave has been in the role for the last 12 months and we have all been able to see how Dave commits himself totally to the job. Dave’s approach is always one of getting stuck in. We all know that Dave cares deeply about hings being done right, and he will always tell us when they’re not being done right. But the important thing is Dave will then go and get things sorted with his hands on approach. Although Dave is literally very visible in his hi-vis vest, he also gets on with many things behind the scenes which few people know. Discreetly helping people and making the town a better place is something Dave does a great deal. As deputy, Dave has worked well with Ken as Mayor. They get on and respect each other. They are a great team for Henley and will do a great job facing up to the challenging times that lie ahead to recover from the after effects of this terrible crisis.”

You can watch the full Annual Meeting of the Town Council (Mayor Making) at https://www.youtube.com/watch?v=zAVdCFVhrwY