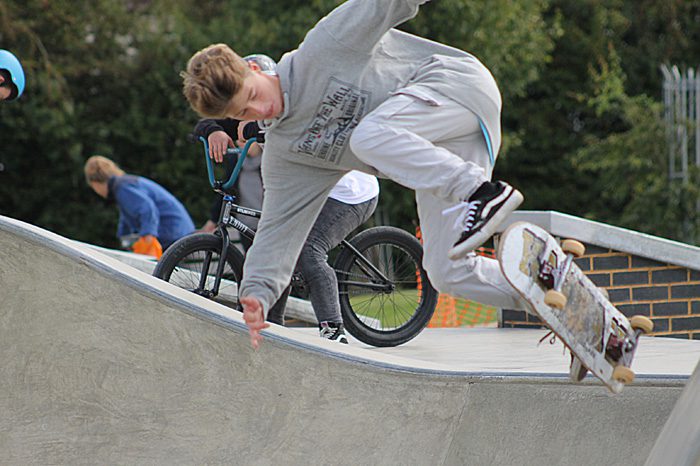 Henley Town Councillors at the Recreation & Amenities Committee meeting on Tuesday night voted to put the project on hold to build public toilets on Makins Recreation Ground until the current lockdown measures have changed.

Currently the skatepark and playground at Makins are closed in line with government Covid-19 guidelines.  The skatepark has had barrier tape put up around the perimeter to deter use but over the last week this has been broken on a few occasions.  The Committee are looking at hiring proper security fencing after the local police suggested this and agreed to look at the cost of this against a security person patrolling this and other sites around town.

A public survey was conducted by the Council asking whether toilets should be built and this was completed by just 85 people.  63% answered No to the question – Do you feel there is a need for public toilets at Makins Recreation Ground?  Henley Mayor, Councillor Ken Arlett said this was not a good enough representation of the town with a population of 12,000 people.  Councillor Paula Isaac said that another survey should be completed at a more peak time and that “we have a state-of-art facility and we should provide toilets to go with it.”  Councillor David Eggleton proposed to organise a meeting with Henley Mayor and the charity Headway who are based at Brunner Hall next to Makins to see if a toilet could be built at the back of the building where there is already drainage.  A vote was taken on this proposal with equal votes for and against.  Chair, Councillor Kellie Hinton made the casting vote against this proposal.

Nomad who up until the coronavirus crisis had outreach workers regularly visiting the skatepark.  They responded to the survey “In principle the idea of having toilets at the Makins Recreation Ground is a great idea and one that would clearly benefit users. However, although the facilities have been boosted with the new play park, gym equipment and of course the skatepark, they are still quite isolated with no one to provide daily oversight, to help care for/look after/ensure proper use or to be around and available. Our fear is that without this kind of input/supervision, any toilet facility becomes yet another potential target for vandalism, drug taking and general misuse. We already see factions developing between the young people who gather on the park and some residents/park users.”  23% of those who supported the provision of toilets were also concerned that the proposed facilities would be open to misuse.

An estimated cost for a stand alone building would be between  £62,000 – £71,000.  Many Councillors thought that this was a lot of money to spend right now but Councillor Ken Arlett said that he thought it could be built for less next to Brunner Hall.   A suggested alternative cost-effective proposal was to install signs to tell people where the nearest toilets are at Greys Road Car Park (0.3 miles and about a 6-minute walk away) and use of portaloos (which can be hired from £20 per week) for future events such as skatepark workshops.  This was suggestion was not proposed to be voted on.

Councillor Glen Lambert proposed to put the project on hold and to carry out a proper consultation when lockdown measures have been lifted.  This was voted through.