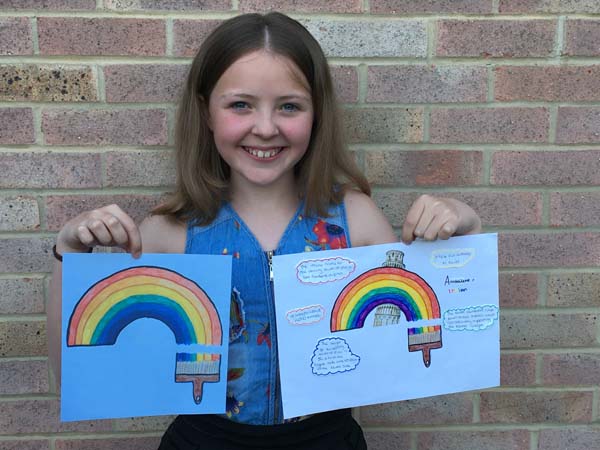 Megan is a Year 7 student at Gillotts School and was set a languages project to create a rainbow and add facts about the chosen country.  Megan said, “When I drew my first rainbow as a voluntary piece of work set by Gillotts virtual School I never dreamt it would bring so much happiness to others and win the chance to have it turned into a piece of jewellery.  I thought how fun and easy it would be to dip a paintbrush in a row of paints in the order of the rainbow colours and just make a rainbow shape.  Before I carried on with my homework I took a photograph of my rainbow because my family liked it so much and this is the one I entered into the jewellery competition at the last minute.  My homework continued with an Italian theme with a picture of the leaning tower of Pisa and lots of facts.  I called my artwork “Arcobaleno” which is simply Italian for Rainbow.”

The Trustees of the Henley Municipal Charities saw Megan’s rainbow and asked if it could be included in their newsletter published to the almshouse residents.  Megan said, “I said they could because I wanted to cheer people up. One of the Trustees spotted my rainbow and asked if she could have a copy so it could be displayed outside St. Nicholas’ Church in Rotherfield Greys.  This was going to be tricky because the artwork wasn’t large enough so I decided to create a second rainbow for the lady because I didn’t want to let her down and I appreciated her appreciating my art.  I presented Mrs Ovey with the original artwork which I understand she is going to frame.  You can now see my rainbow on display outside the church.”

Megan also used her artistic skills to paint three large rainbows in red, white and blue strips for her house window display for VE Day 75th celebrations (above).  Megan added, “My family were inspired by the many courageous stories they had heard over the years and now as we face the challenges of the present time we decided to get the paint brushes out once again to create a piece of artwork three metres wide by 60 centimetres high so our neighbours and everyone walking past our house could see it and remember those who have given their lives for our country.  Under two rainbows my Mum painted battleships to represent the Navy because we have a friend who was called up to help with the current crisis.  My sister painted the background with me and the soldiers marching towards the centre rainbow.  Finally we painted spitfires in the sky remembering friends who have served in the RAF and personal connections to those who lost their lives flying spitfires.”

When Megan found out she had won the jewellery competition she said, ” I was speechless because I never expected to win and only entered to spread happiness.  Thank you so much Mr Rodger-Sharp and his jewellers who I am going to ask if they can make my rainbow into a necklace or bracelet for lots of people to enjoy.”

David Rodger-Sharp said, “All the entrants are brilliant. Something I love about Henley is the sense of community and how generous everyone is to each other. It’s a beautiful place to be when the world feels like a hard place to be. I’ve really enjoyed seeing all the rainbows around the town. Something that seems like a relatively small token has such a big impact and raised many smiles I’m sure.  I loved the simplicity of the Megan’s rainbow design and I thought it was very clever with the brush. Thank you to everyone who entered. You can see all the entrants on our website at www.rodgersharp.co.uk.”

If any of the other entrants would like to pay for their design to be made into a piece of jewellery David will be very happy to do this and will donate 20% of profits to local charities.  Contact David via the website above.