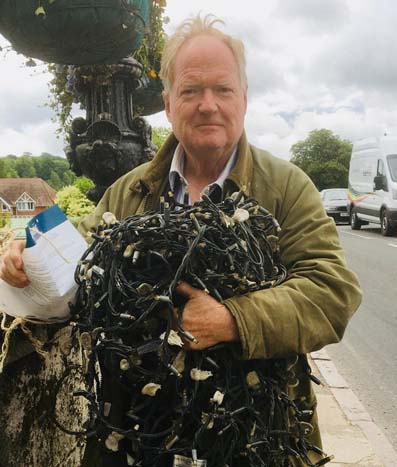 Clive Hemsley who was behind the project to light Henley bridge up has now decided to withdraw himself from the project after a letter was published from John Whiting Chairman of the Henley Archaeology and Historical Group letter to the local newspaper, saying “Time to remind Mr Hemsley and his enthusiastic supporters that it is an offence under sections 7 and 9 of the Listed Buildings Act 1990 to “execute any works to a listed building for its alteration… which affect its character as a building of special architectural or historic interest, unless the works are authorised.  The unauthorised lighting strips remain attached to the historic stonework of the bridge. What plans, and when, has Mr Hemsley to remove these without damaging the fine ashlar face of the 18th century stonework?”

Clive removed the temporary lights he installed in February 2018 without planning permission last week (photo above).  He submitted two planning applications for permanent lights to Wokingham District Council who have refused both and was waiting to hear on a decision from South Oxfordshire District Council on an application  submitted in February 2020.  The decision has been delayed because of Covid-19.

Below is Clive’s response to Mr Whiting:

I never understood why the likes of John or his colleagues never attended the public meeting to discuss his views. All historic groups and councils were invited It’s not inappropriate to compare 19th and 20th century bridges in London to Henley’s 1786 stone bridge. The fact that there are 40 listed bridges in London all with planning permission for LEDs 11 already lit up and 7 of these bridges are stone built seems to have lost relevance.

Mr Whiting has also missed the point that he refers to uplighters (flood lights) which are still in situ and rusting away in the four corners of the bridge. Not very environment friendly! Why has he not done something about this?

Mr Whiting has also missed the point that I have been making for several years now. (Well before I put those temporary LEDs on the bridge) That as Chairman of HAHG what has he done regarding the serious damage to the underside of this historic grade 1 bridge of Henley?

I would ask Mr Whiting to look down from the fine Ashlar face and look at the damage to the underside that holds that fine Ashlar up!

Further if he looks up at the town Hall he will see a string of halogen lights surrounding the clock tower this is on a grade 2 building. I have not seen planning permission granted for these lights which are only lit up at certain festival and holiday times. Why are these important facts ignored? Why has the town hall got a string of old fashioned light bulbs around the clock tower without planning permission?

Could I also remind Mr Whiting that Oxfordshire County Council (who own the bridge) did state that the bridge was due for a full inspection last OCT – and that OCC were going to take the temporary LEDs down then but because of the rains and recently more important issues clearly this has not happened but the Chief bridge engineer for OCC said that he had inspected the LED/ fairy lights the day of the public meeting and inspected the temporary adhesive and that he publicly stated there was NO damage to the bridge caused by this LED application.

On a personal note it really is not a big deal taking these lights and cabling off and I will do it personally if it makes Mr Whiting happy.  ASAP

I would like to state I publicly withdraw any further dealings/connection with the bridge it’s lighting and more importantly it’s maintenance. Despite the backing of OCC and our MP and the 2700 locals it’s also truly exhausting to get so many negative and personal letters of condemnation and frustrating considering all these organisations including Wokingham District Council / SODC we’re invited to our public meeting yet nobody could be bothered to come and give there views and advise.

Finally I would like thank everybody that signed the petition “for the lights” and for encouraging me to carry on and I apologise to all of you for not seeing it through.

There are so many far more important issues to challenge us these days -you would think lighting up such a beautiful bridge would be mentally good for all of us!

Although I withdraw my interest I would encourage other locals like David Roger Sharp far more diplomatic and more patient to pick up the torch am sure one day with the latest technology it will serve the town proud and cause zero damage to the bridge.