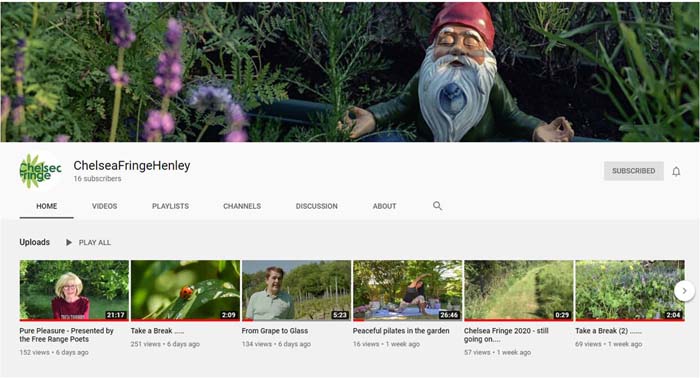 The Chelsea Fringe Henley festival celebrated all things horticultural last week and used inventive ways this year to take it ‘virtual’ and online.

Local artist, Kirsten Jones kicked off the week with a video, over the first weekend, of her creating a new painting ‘Garden Flip Flops’, the latest in her shoe series. The painting was inspired by the flowers and plants in her garden and her favourite footwear.  Starting with a tour of her garden, Kirsten then went on to do some sketches in her notebook.  Next she showed some initial idea designs and then started the artwork by placing the collage of words and sheet music.  Overnight Kirsten’s initial design changed after someone messaged her on Instagram to say that they loved the butterflies Kirsten had shown and she restarted and completed the piece with these. 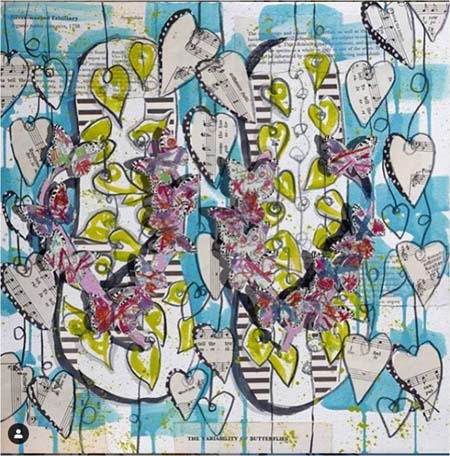 On Sunday, the first meeting of Bookworms, the new online book club created especially for the Fringe had attendees from Manchester and interest from Argentina! Plans are to continue this club every month and they are lucky enough to have the author of the first book they discussed The Well Gardened Mind by Sue Stuart-Smith attending the next meeting.

Amanda McGregor put on ’The Painted Garden’ in her garden in Checkendon and hosted broadcast tours, talks and interviews from her Facebook feed throughout the week.

Ruth Green of Pneuma Pilates hosted a peaceful pilates session  in her beautiful garden on Wednesday. More than 30 fringers joined in the session including some from the south of France and the USA.

Grape to Glass on Thursday saw Jan Mirkowski from the Fairmile Vineyard show you around his wonderful vineyard and the vines.  He said, “The vines have started to wake from their winter slumbers and there’s early buds forming thanks to the mild winter.  The grapes will be ready to pick in October.”  He showed a Chardonnay vine, saying “Thanks to climate change we can grow these tricky vines here now.”  Martin Chapman form Watlington Fine Wines then tasted the two sparkling wines that the Fairmile Vineyard produces.  About the white cuvee, he said, “Lovely golden in colour, gorgeous aroma and rich and luxurious taste” and the rose commenting “lively freshness to it, rich in fruit flavours.”

The Henley Group of Freerange Poets presented ‘Pure Pleasure’ on Friday which included poems about gardens and nature and ended with Bridgit Fraser performing a poem ‘Silver Linings’ she wrote to help people through the troubled times we are having.

Badgemore School invited people to take a break and watch a video of their beautiful grounds which features a pond, woodland, orchard, bee hives and a large storytelling chair.  The video was produced by parent Marco Barcella whose son Rafi is in Reception class.  He said, “The grounds at Badgemore are truly magical – it is such a photogenic space we could have kept filming all day! The sign as you enter the school says, ‘Nature it is not a place to visit, it’s home’ and I wanted to really capture that in this video.” Parent, and Associate Governor, Tuc Ahmad runs the Garden Club and has been a pivotal member of the team that has transformed the grounds. He said “It is a real honour to have our hard work recognised through initiatives like Chelsea Fringe Festival. I think one of the key things at Badgemore is that we were very ambitious in our original plans for adding nature in to our grounds and then worked incredibly hard, with lots of wonderful support from the local community, to enhance what we had to create a biodiverse space that is a truly inspiring place to learn, work and play. It was quite emotional to see this beautiful film highlighting how far we have come after five years.”

Chelsea Fringe Henley Co-Founder Victoria Newton said, “The festival has had to be pretty flexible as technical issues meant some of the plans were not able to be brought to fruition and also lockdown restrictions meant that we were unable to actually get some people to the places they needed to be to film or record activities. We really missed having face to face interaction with local residents and visitors to the town which we would normally have with events like the floral flotilla and are conscious that many people will have been excluded from joining in just because they have limited online exposure. With all this in mind we plan to have a mixture of events at next year’s Chelsea Fringe – some actual live events, some of those then uploaded or broadcast and some virtual-only events too. In this way we hope to engage even more people and showcase more of the talent, expertise and enthusiasm for gardening in the local area next year.”

If you missed any of it, you can still catch up on all the videos on the Chelsea Fringe Henley YouTube channel