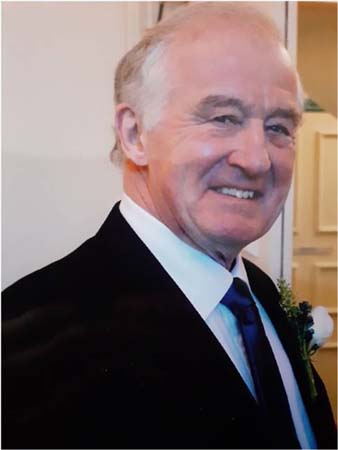 He was a prominent Industrialist and a Chartered Mechanical Engineer by profession and elected as a Member of the Institution of Mechanical Engineers – founded in 1847 by railway pioneer George Stephenson and others and now with 120,000 members in 140 countries.

Barry originally undertook his training and apprenticeship with ICL a prominent UK main frame computer company which was later acquired by Fujitsu.

He was awarded a travelling scholarship with Philips and travelled to Netherlands to broaden his knowledge of the manufacturing sector.

Barry became Production Director in the UK for Kearney and Trecker a world class manufacturer of heavy industrial machinery headquartered in Milwaukee in the United States. At one point the Kearney and Trecker plant in Milwaukee was the largest in the world devoted exclusively to the manufacture of industrial milling machines. The “Milwaukee-Matic” was one of the first Numerically Controlled Machining Centres in the world which led to modern day manufacturing.

Barry became Managing Director at CompAir in the UK which at that time was based in High Wycombe and Barry and Lesley moved to Henley-on-Thames. CompAir is a world-class global manufacturer of compressors for a wide range of applications including north-sea oil as well as pharmaceutical and food and beverage production sectors.

Barry became a Managing Director at Arlington Securities a pioneer developer of Business Parks set up and led by Raymond Mould and Patrick Vaughan doyens of the property industry. Arlington which became a part of British Aerospace quickly grew into the largest Business Park Developer in Europe. Barry was responsible for completing the Aztec West Business Park near Bristol originally conceived as a Science Park and now home to over 100 blue chip companies and 7,000 employees. The Aztec Centre was opened by Margaret Thatcher when Prime Minister. Barry was also responsible for the successful development of Birmingham Business Park which is now also home to some 7,000 employees and some of the world’s best-known brand names such as Rolls Royce. At the time Birmingham Business Park was leading the field in low density and high-quality Business Parks set in superbly landscaped environments. The Waterside Centre at Birmingham Business Park was opened by HRH The Princess Royal. Barry also became Marketing Director at Arlington.

Barry’s time at Arlington Securities was his first introduction to the design and construction industry and it was during this time that Barry could not help but make comparisons between construction and the advanced manufacturing sector where he had spent a large part of his successful career.

Barry was a member of The Savage Club, founded in 1857 and comprising a wide range of members from the arts, music, drama, literature, science and law.

Barry also became a member of Lions Clubs International a network of over 1.4 million members worldwide dedicated to helping those in need. He became President for Lions in Henley-on-Thames.

He also held the position of Chairman for Probus in Henley-on-Thames. Probus is a worldwide organisation of business and professional people.

Barry’s dry sense of humour as well as impeccable manners and total professionalism made him a person to whom many looked towards for inspiration and leadership.

In his spare time Barry was also a flying enthusiast and was a member of the Aeronautical Society. He enjoyed learning to fly many different aircraft types.

He leaves behind his much loved family – his Wife, Lesley Holmes, his Son Chris and Daughter Tessa as well as five Grandchildren – Cameron, Felicity, Emily, Stuart and Jenny.