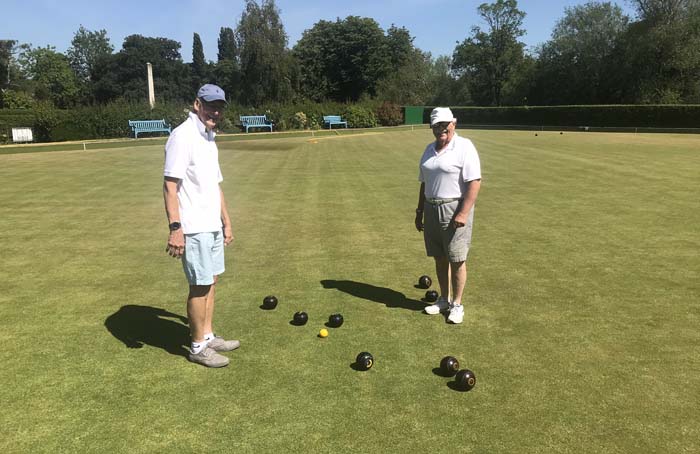 In the middle of April, the Henley-on-Thames Bowling Club reported that, like all other sporting organisations, it was in lockdown and although none of its members were allowed to bowl, the green at least could be maintained.

A month later they received word from Bowls England via our Oxfordshire Bowling Association that the Department for Culture, Media and Sport (DCMS) would allow bowling greens to re-open. They were advised to wait for more detailed guidance from Bowls England which came through two days later and clarified some of the detail not specifically referred to by DCMS.

The Club’s Committee quickly approved a detailed set of rules for its members and on Saturday 23 May, some eager bowlers got back on the rinks although as luck would have it, 2 unlucky members got pretty damp when there was a small squall over Henley that morning.

To accommodate the social distancing requirements laid down by the Government the Club has followed Bowls England guidance and:

Although the Club house has to be used for access to the green, only the toilet facilities can be used. The changing rooms, bar and kitchen are closed to all members.

Plenty of hand sanitiser is available and all equipment and bowls are cleaned before and after use. Social distancing rules are strictly adhered to with members keeping at least two metres apart from other members (except when the members are part of the same household).

These rules mean that the Club is in a position to give one-on-one tuition to those interested in trying out a new sport, providing of course social distancing rules are followed. Contact the Club via its website https://henleybowlingclub.wixsite.com/home  and arrange a personal “try out” session and enjoy this lovely warm weather in a fantastic setting next to the Thames.

Above is Derek Gillespie on the left and Brian Duddy on the right part way through their first game of the season on Friday 29th May. Length is good but direction still needs some work.

Below is a picture of 5 happy bowlers enjoying the mid-morning sun on Thursday 28th May. From left to right, Peter Borsberry, Nigel Bridges (what is he doing?), Colin Ward blocking out Jeanie Davies and a new Club member, who has just joined us from Cippenham Bowls Club, Simon Hatcher. 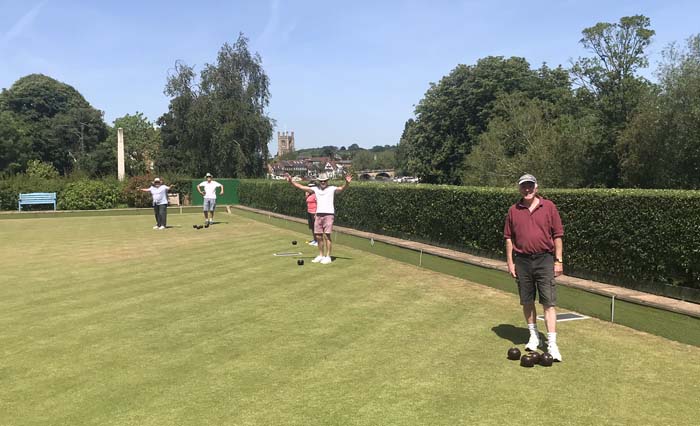