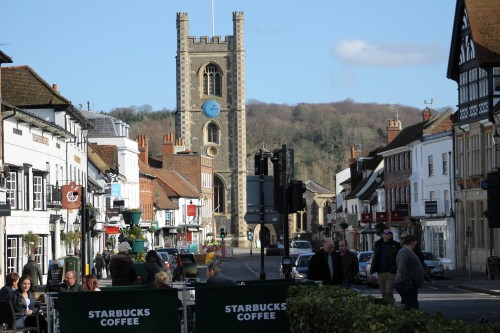 Councillor Sarah Miller, Chair of the Town & Community Committee put forward a proposal to trial the closure of Market Place road on a market day (Thursday) once a month from the corner of Joules up to Facy at the meeting on Tuesday which was voted through.

She said, “If we don’t try anything, it will be the same old Henley. I think we should start thinking outside the box and look at ways at creating more space in Market Place for the markets and eateries allowing for social distancing and make Henley an exciting place to visit and get the heart of the town buzzing.  We have made a provisional enquiry to Oxfordshire County Council to see if we can do this.  I think it would be crazy not to test it to see if it would work.  The only issue I think is the traffic.”

Councillors Hamilton, Eggleton and Hillier were against the proposal.  Will Hamilton said, “I’ve spoken to a number of senior retailers who are openly saying this Council would be stupid to close Market Place.  We can’t afford to close any roads in Henley.  It will have a huge impact on all the residents between Greys Road and Gravel Hill right across and will force vehicles down the Reading Road.  It will cause absolute carnage.  We shouldn’t support a piazza in Market Place we should be looking at supporting the other independents in the other smaller peripheral roads.”

Councillor Lorraine Hillier who runs Hot Gossip on the Reading Road added, “We’re in danger of making Henley Market Place centric again.  There are plenty of  restaurants and pubs outside of Market Place which have no outside space.  Let’s not concentrate on Market Place, lets look at trying to open one of the other roads and stretch it out.”

Councillors Reismann, Lambert, and Isaac were in favour of the trial.  Councillor Lambert said, “I think we should try it. As a Council we should be open to new ideas.”

Town & Community Manager, Helen Barnett confirmed that she had received an email from Laurence Morris from Laurence Menswear on Duke Street confirming that the majority of the retailers in the town were against this proposal.

It was recommended that the proposal to close Market Place should be investigated further.