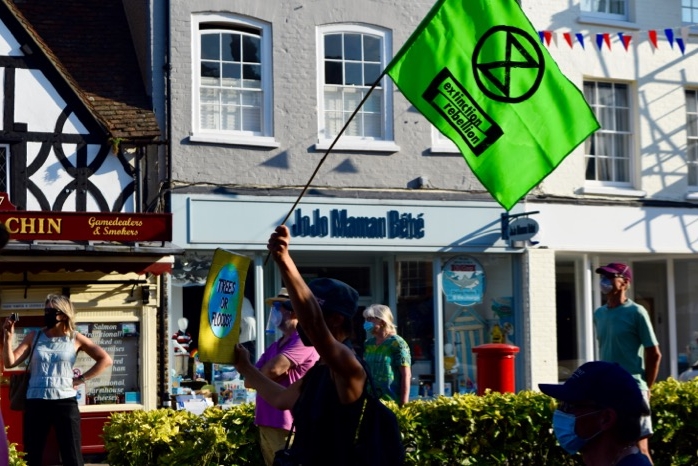 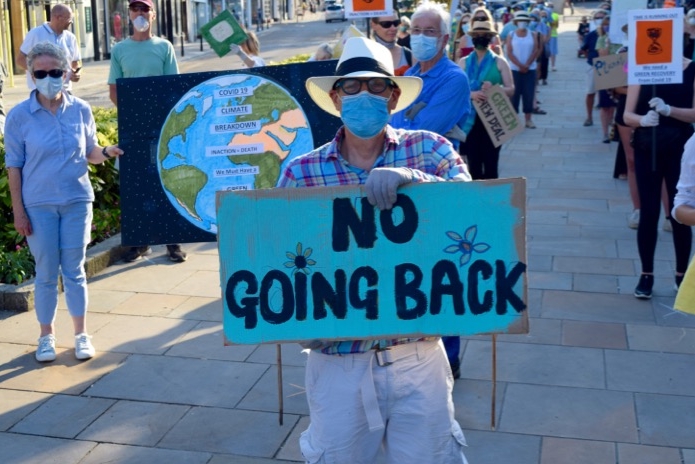 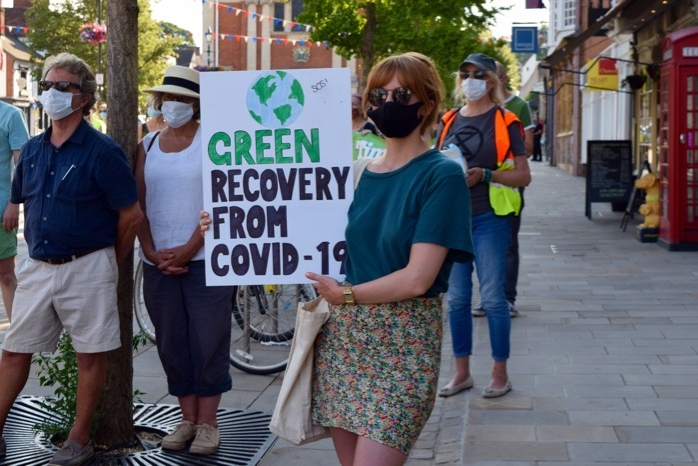 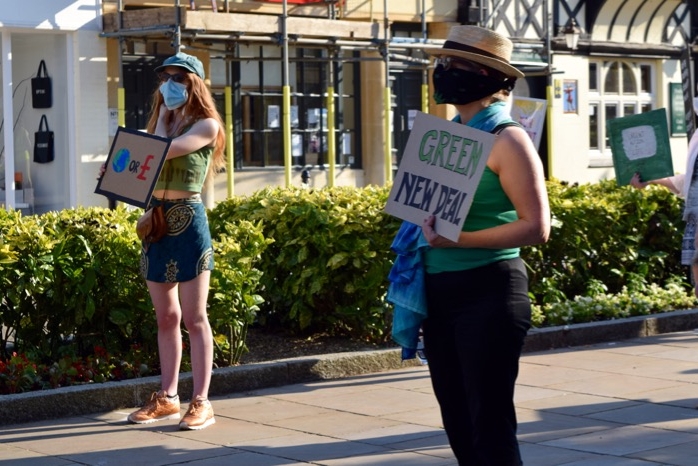 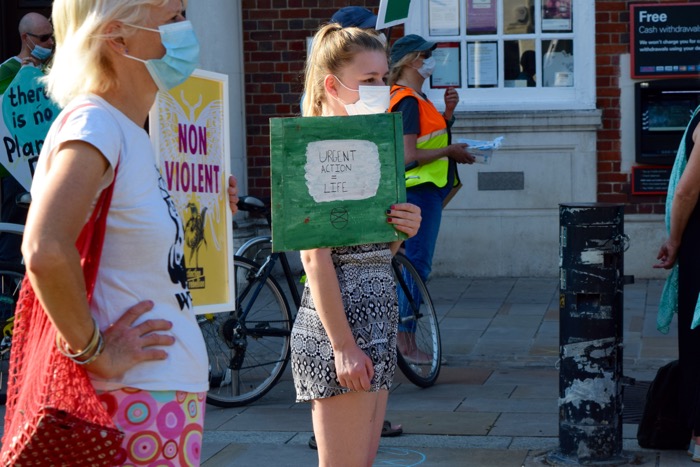 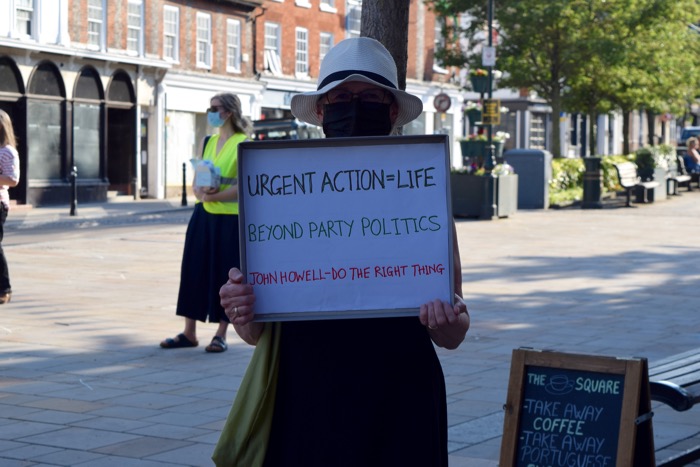 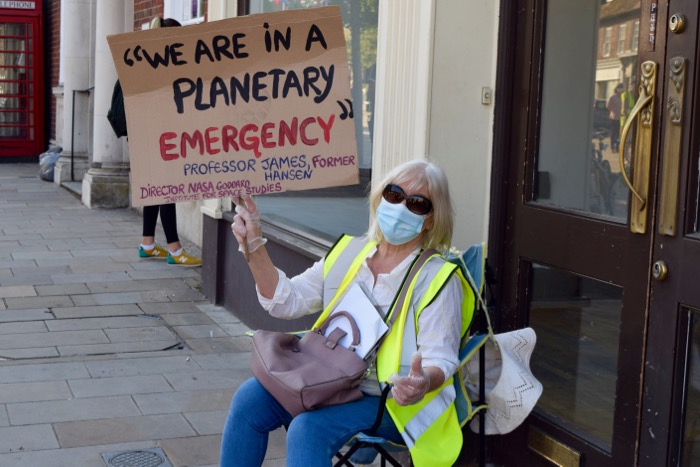 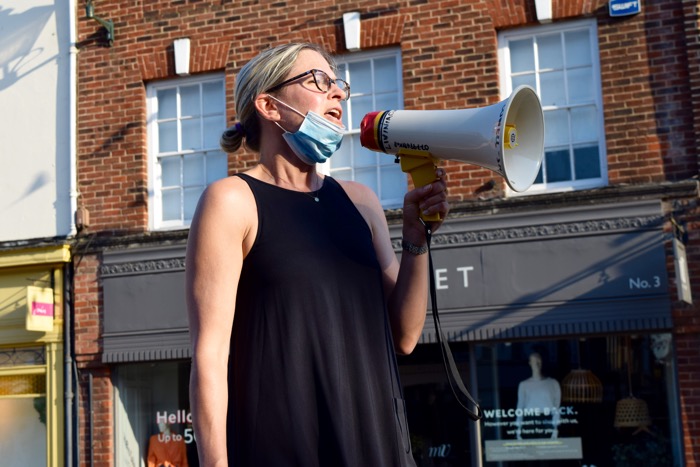 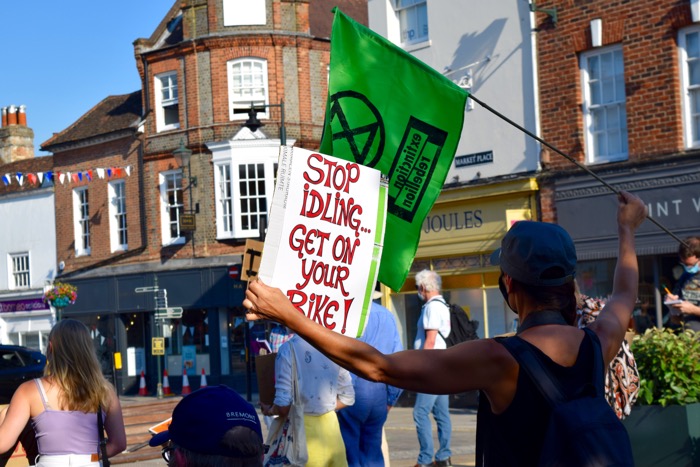 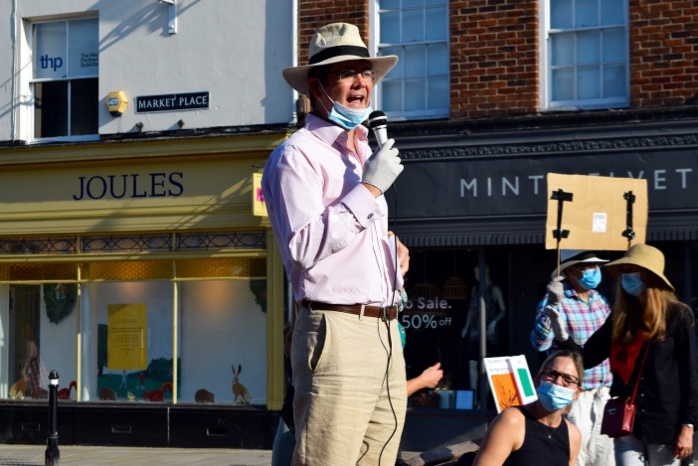 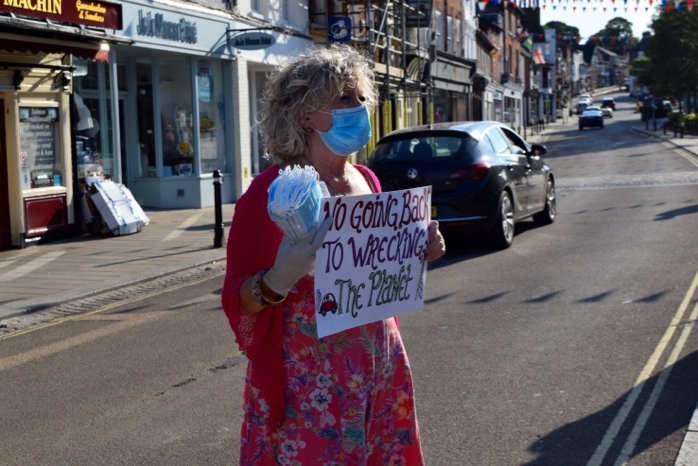 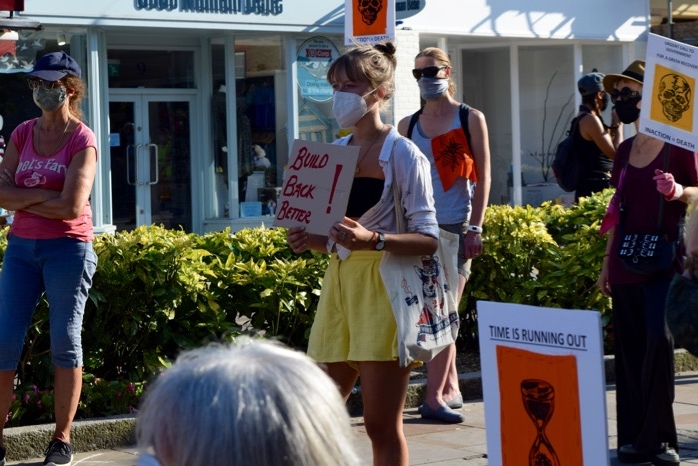 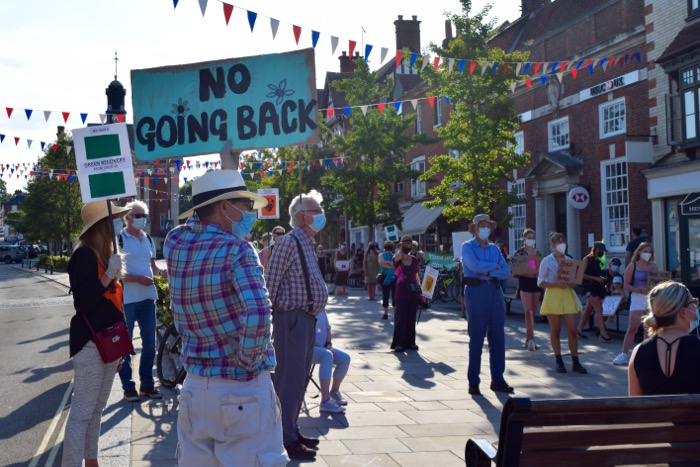 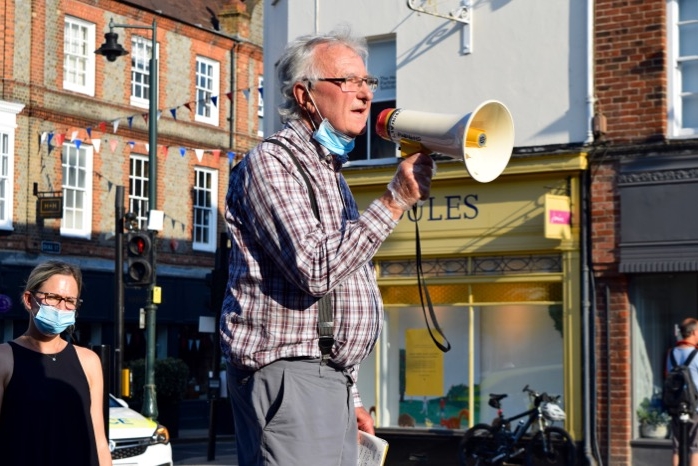 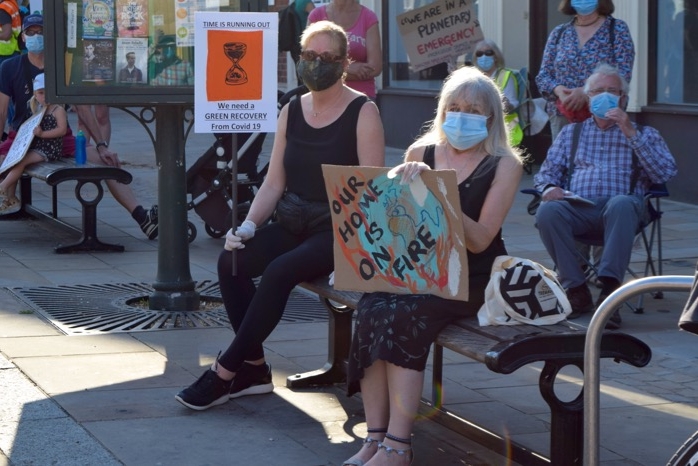 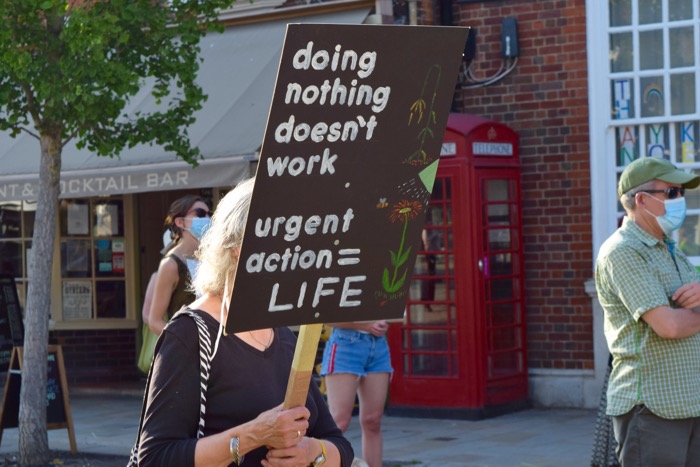 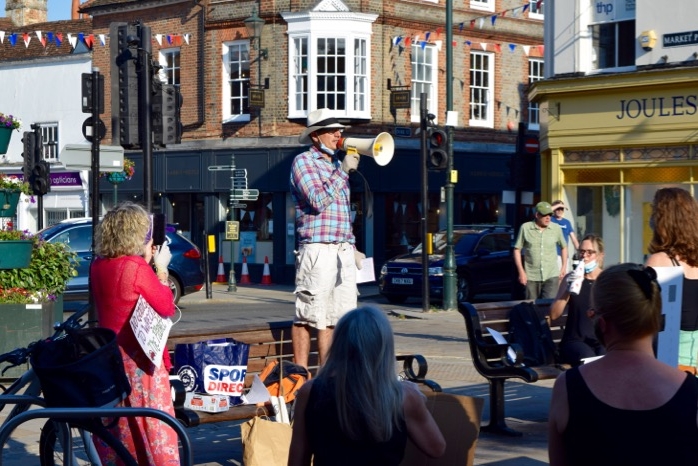 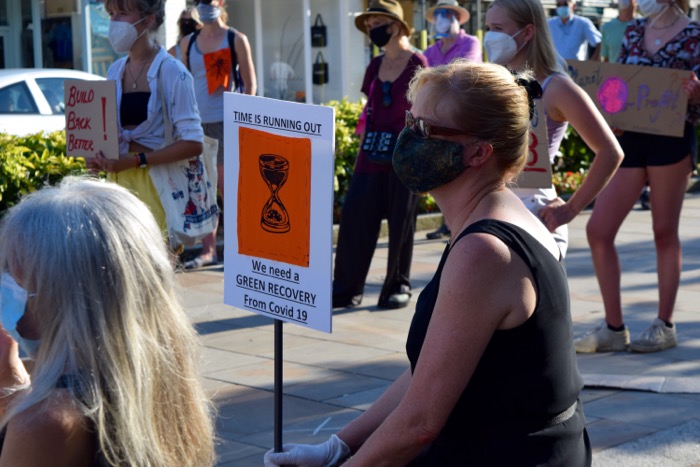 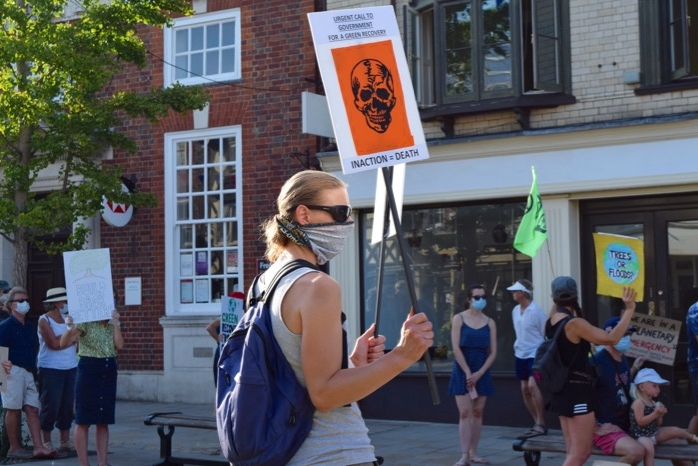 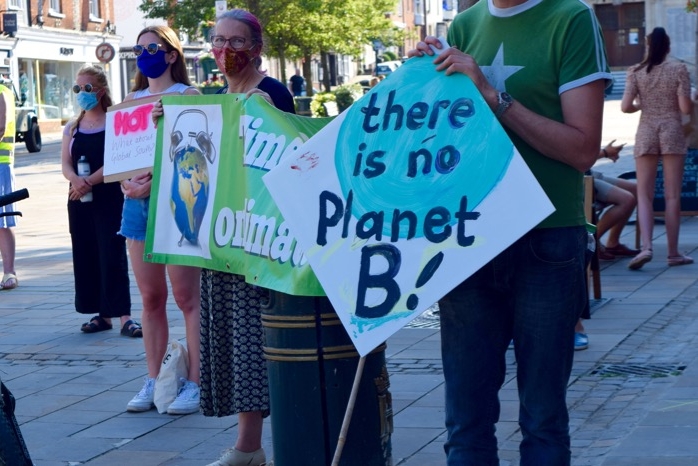 Extinction Rebellion Henley held a peaceful protest last Thursday (June 25th) to demand governmental action on the climate crisis. The climate activists were calling on local MP, John Howell to press the Government for a green and just recovery from the COVID-19 pandemic.

Protestors gathered in Falaise Square at 6pm, all of them wearing masks and keeping a two metre distance apart. Speeches were made by XR Henley co-ordinator Kate Oldridge; XR Henley members Jules Lacey, Dominic Hall and Ed Atkinson; and Henley resident Professor Richard Fortey, the palaeontologist and well-known natural history television presenter. Many protestors made their voices heard by holding placards and banners, displaying statements such as ‘no going back’, ‘there is no planet B’ and ‘green new deal’.

The demonstration, part of a nationwide day of action by Extinction Rebellion, was staged to coincide with the publication of the Committee on Climate Change (CCC)’s annual report. The report stated that the UK Government’s current steps to mitigate climate change will not meet their target of net-zero emissions by 2050, nor do they ‘deliver adequate progress in addressing even the unavoidable impacts of climate change, let alone the risks of expected levels of global warming of around 3°C above pre-industrial levels’. The independent Committee gave advice on how to implement a green economic recovery from the pandemic, one that focuses on transitioning to net-zero emissions and improving the country’s resilience to climate change.

Many of the Extinction Rebellion Henley protestors went further to state that the Government’s target of 2050 is far too late. In her speech, Jules Lacey said, “Councils and businesses are overwhelmingly targeting 2030 to reach carbon neutral, and that’s two decades more ambitious than our own government. We are still waiting for our government to catch up and declare a climate and ecological emergency and act on it. Their target to be carbon neutral by 2050 is dangerously inadequate.” She continued, “We urgently need a green recovery from COVID-19 to include a rapid transition to zero carbon greenhouse gas emissions. Imagine taking three decades to act on this pandemic. Now imagine three decades to have met zero greenhouse gasses.”

The impassioned speeches all spoke of the severity of climate breakdown, and the urgent need to act against it. “Humanity is facing a crisis which is unprecedented in its history, one that will have vastly more far-reaching, serious, long term health and economic consequences than the coronavirus pandemic,” said Kate Oldridge in her address. “Government inaction on the climate and ecological emergency is an existential threat to civilisation […] Experts are warning us that the world only has 6 months in which to change the course of this crisis. We’ve got to act now to radically transform our economy towards a circular economy.”

Extinction Rebellion Henley are asking the Government to treat to the climate crisis with the same importance as the coronavirus pandemic, and respond with emergency measures and policies. They are encouraging Henley residents to write to local MP, John Howell, asking him to push for a green and just recovery. XR Henley have created a template email which can be found on their Facebook page. Personal edits to the template are also recommended, as duplicate emails have been suggested to be less effective.

Despite the focus on governmental action, Kate Oldridge was keen to highlight that the climate crisis is a universal problem, and will impact everyone regardless of political affiliations. “This is not a political issue,” she stated. “XR is ‘beyond politics’. We are not lobbying on party political issues.  This is an emergency that affects all of us, regardless of our political persuasion. In fact, we are asking the Government to implement the recommendations of its very own advisers. We are, a constituents of John Howell, asking him as our representative in Parliament to take action on an emergency which is predicted to cause flooding, overheating and water shortages in the UK, quite apart from the death, suffering and displacement of people on a massive scale all around the world.”

The Herald approached John Howell for a statement on Thursday’s protest, but he declined to comment.

Join in Henley Regatta Fun This Saturday
Scroll to top