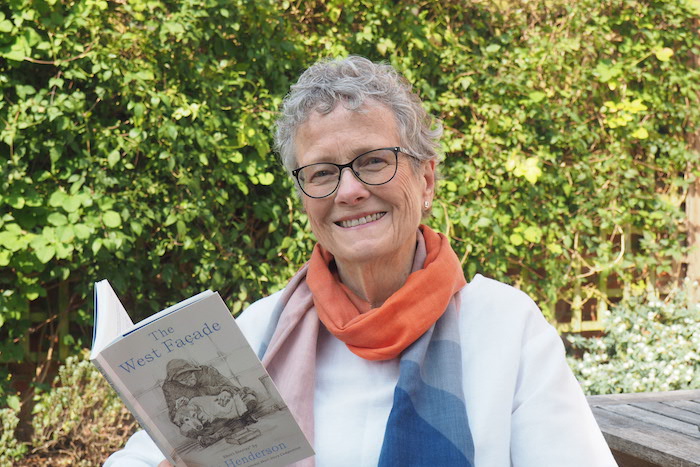 Henley-based writer Liz Henderson has published her first book, The West Facade. The self-published paperback is a collection of 13 short stories, each with its own distinct subject matter but linked by a focus on people and the human experience.

The West Facade is described by Liz as the “coalescence of all sorts of writing”, born from a decade’s worth of creative writing courses, competitions and exploration of the craft. Liz began writing after she retired, having realised her desire to write whilst living in Paris. She explained, “My husband had a job [in Paris] for a few months, and I didn’t know anyone and didn’t speak very good French. He went off to work in the mornings and I decided to go to a different coffee bar every morning to have my croissant and coffee. I took a big A4 pad of paper and I brainstormed onto that to decide what I was going to do with the rest of my life.”

After deciding to try her hand at creative writing, Liz took a number of courses in Oxford with respected authors and teachers, including Ruth Dowley and Dr John Ballam. From the early stages of her writing journey, Liz was recognised for her skill. In 2010, she won the Oxford University International Short Story Writing Competition after being encouraged to enter by her tutor, Ruth Dowley. Liz recalled, “It was absolutely extraordinary for me that, not having been taught anything in particular, that I’d been given the opportunity to write. I hadn’t ever taken my writing particularly seriously; it was the first competition I’d ever entered and I won it and it was just absolutely amazing.”

Despite her early success in writing, Liz had no initial intentions to write a book. However, after some encouragement from friends and mentors, she took the leap and self-published her short story collection The West Facade with Oxford Folio. The stories themselves are inspired by Liz’s keen interest in humanity; having been a primary school headteacher in two schools before retirement, Liz explained that she has always wanted to work with and tell stories about people. The 13 tales in her book contain separate characters, each with their own unique narrative voice. The locations also vary greatly, from the Luxembourg Gardens in Paris to the mind of a dreaming child.

The self-publishing process was not without its setbacks, some of which were a result of the coronavirus pandemic; the finished book arrived at the publishers’ on the first day of lockdown and Liz was unable to access it until a fortnight ago. Despite this, Liz is overwhelmingly positive when speaking about the experience.“It’s been a really interesting and very rewarding thing to do,” she said. “I just loved it, loved the whole process. It’s a bit of a cherry on the cake in my life, really. I feel a bit like a spoilt child who’s just been given whatever they wanted. It’s proving to be a really lovely thing. A lot of support and a lot of friendship and a lot of neighbourliness has grown out of this already and it’s only a fortnight or so that I’ve had it.”

Liz expressed her gratitude to James Harrison at Oxford Folio for his help in the publishing process. She enthused, “He’s brilliant and has helped give me a book that I have designed and chosen everything in it. I like that it’s my taste, it may not be everybody’s but it’s mine, and people who know me well say that it’s very much a reflection of me.” Liz also thanked her cover illustrator, Tessa Powell, stating, “I tried many times to find someone who would read the stories and then to use their skills to make an image that really touches readers imaginations. Tessa Powell lives in Watlington and her response was immediately empathetic and right!”

The West Facade is on sale at the Bell Bookshop, to whom Liz also expressed her thanks for their immediate support and encouragement. You can also buy a copy directly from Liz Henderson’s website.