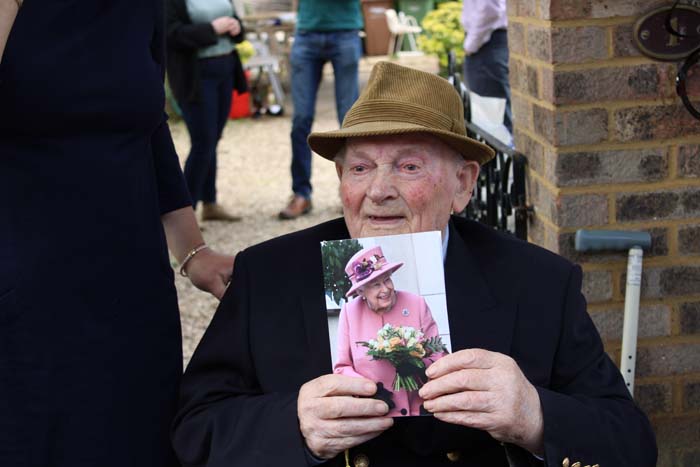 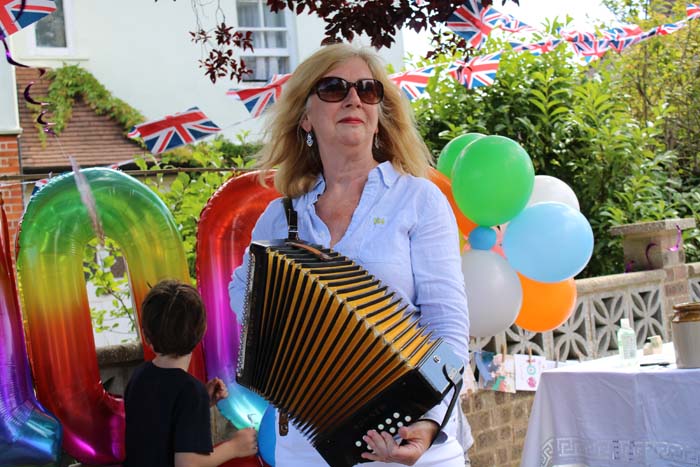 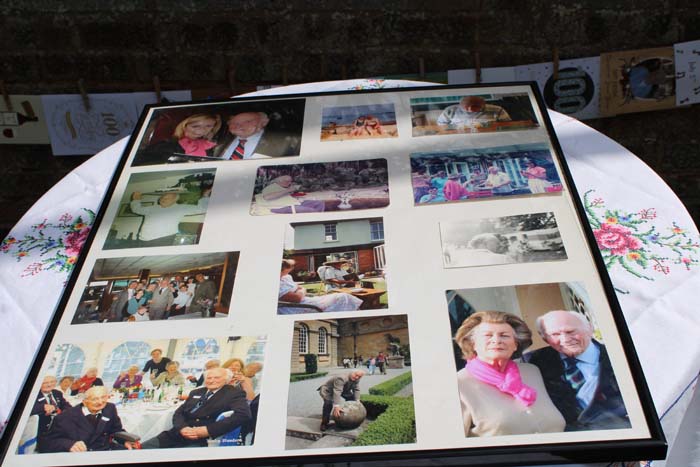 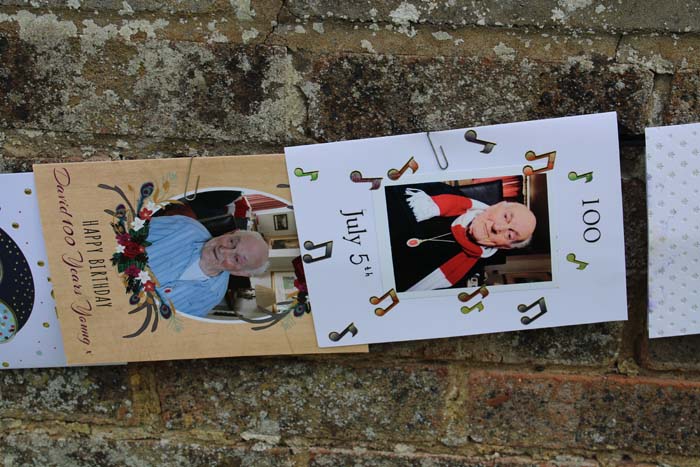 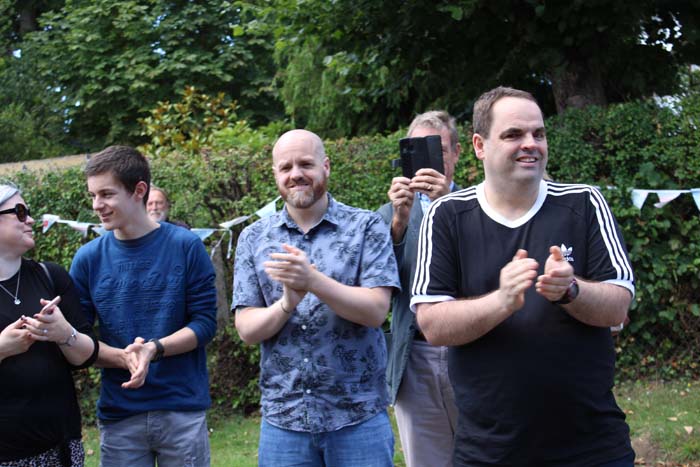 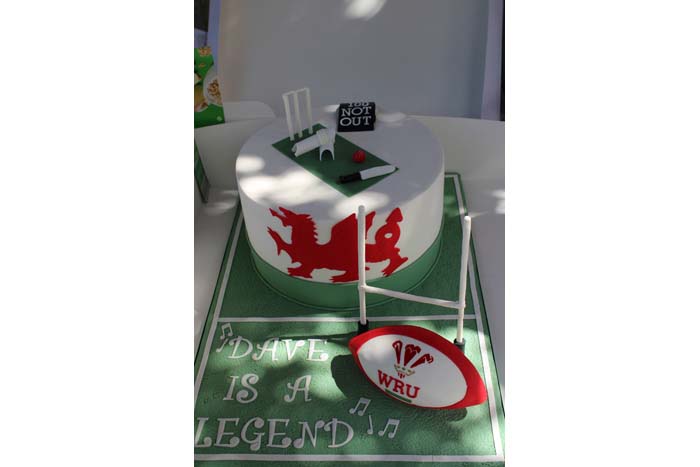 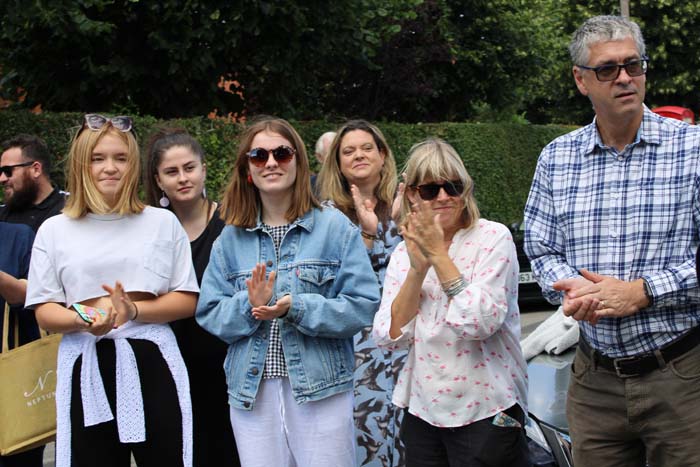 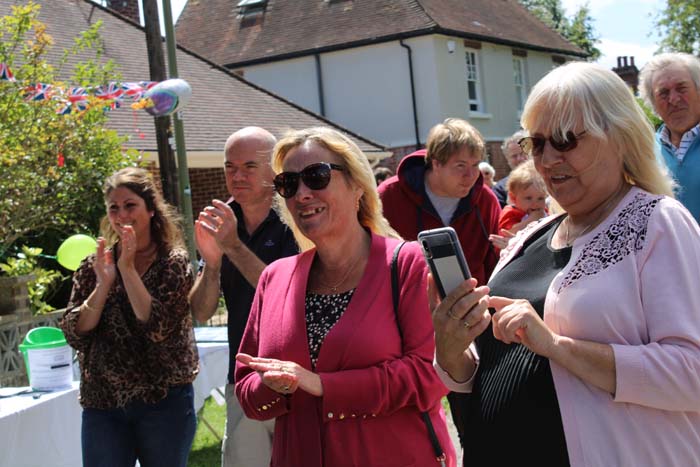 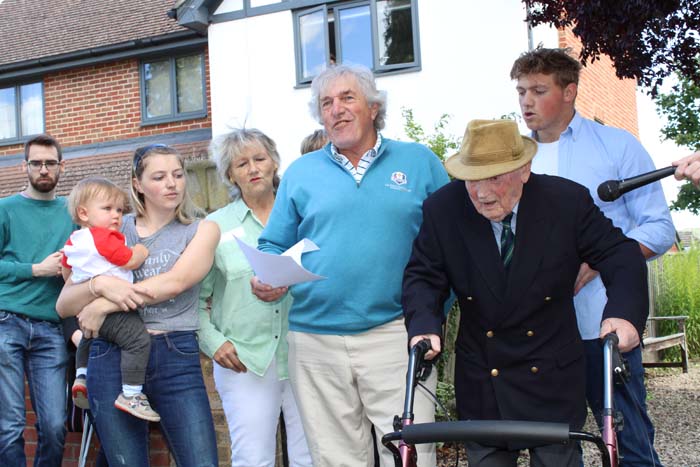 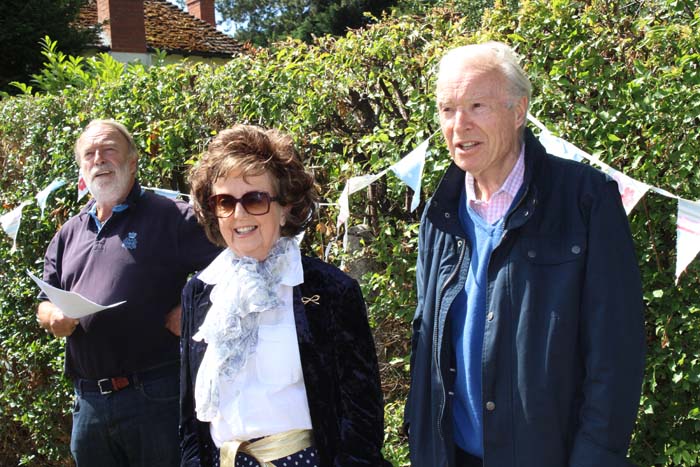 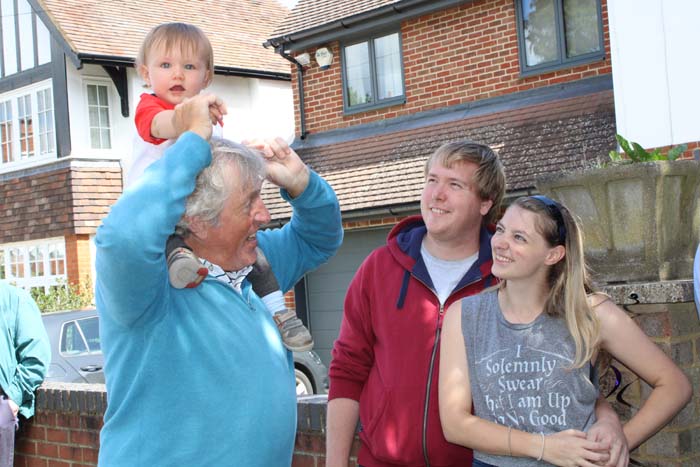 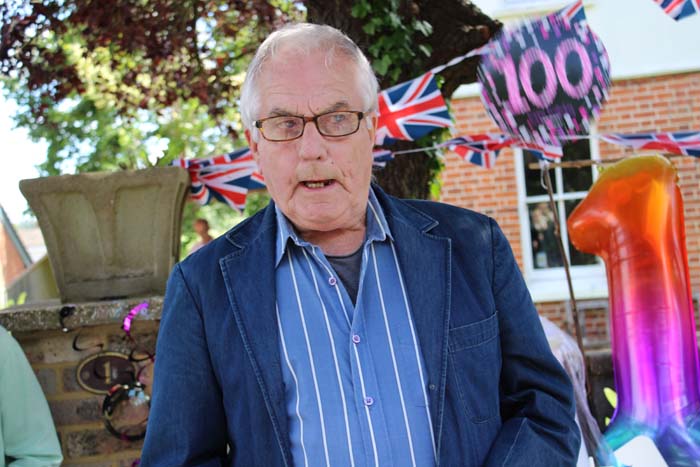 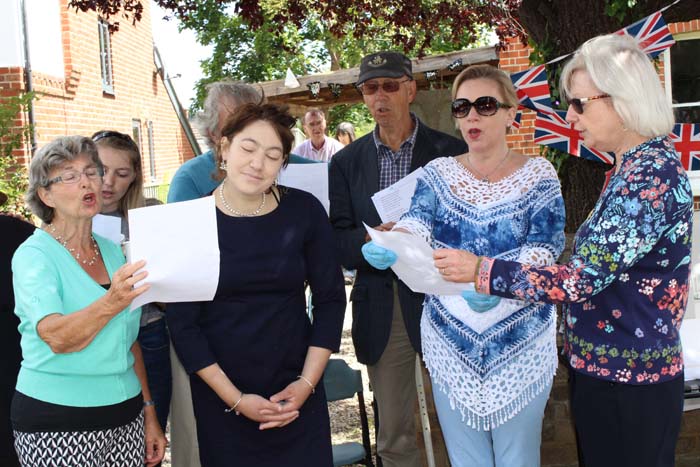 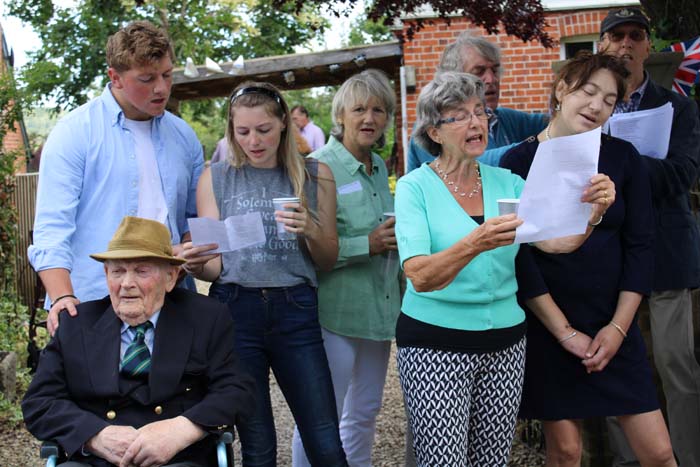 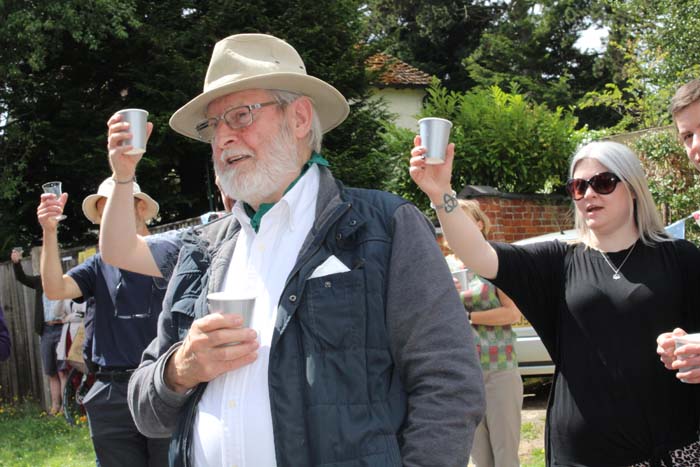 Former landlord of the Rose & Crown pub in New Street, Dave Beck celebrated his 100th birthday yesterday outside his home in Belle Vue Road with a large gathering of family, friends and neighbours to enjoy a good old sing-a-long led by Dave who loves to sing.

On coming out to the big crowd of people Dave said, “God bless you for coming to celebrate my birthday today.”

Everyone then joined in with the songs which included, We’ll Meet Again, Run Rabbit Run, Pack Up Your Troubles, Welsh Song Calon Lân  (Pure Heart), Show Me the Way to Go Home and the National Anthem.  Dave said, “My Mum was doing the washing in our little cottage and she was always singing and she gave me and my sisters some clay pipes and we blew bubbles”, he then led I’m Forever Blowing Bubbles.

Last week, a few people from St Margaret’s Church in Harpsden where Dave regular attends got together to write a special song for him; “He’s a Legend”.  The words included “When he ran the Rose & Crown.  People came from all around.  Just to hear his fruity stories.  For laughs and giggles, he’s renowned!  St Margaret’s Church is proud to have him.  Patriarch to one and all.  Father Christmas to the children. Leader of the choir in their stalls. He’s a legend, he’s a legend, 100 years of being him, being him, 100 years of being him!”

Dave was a twin with his sister Dora who were born on 5 July 1920 to Lily and Louis Beck.   He had two other sisters Amy and Lillian. He first lived in Hurley and he moved to Henley when he was 5.  He attended the National Infants School in Henley.  During his childhood he lived in Northfield End, Vicarage Road and St Marks Road.  On leaving school at 14 Dave became an apprentice fitter and turner at Stuart Turners.  He married his wife Joan after the war and they became the licencees of the Rose & Crown pub in 1953 and it was the family home for 27 years.  They had three children Pam, Ken and Clive.

What’s Dave’s secret to living to 100?  He replied, “I had a lovely wife.  Went to church every week at Harpsden.  I used to sing in the choir until I lost my sight.  I thank God for what I have got and what I have had.”

Colin Varndell, Dave’s Nephew (his twin’s sister’s son) from Bridport in Dorset gave a speech retelling Dave’s incredible life.  “As a boy, Dave was taught to box by his Dad. Louis trained Dave as a southpaw which meant that he could hit as hard with his left fist as he could with his right. On one occasion he was asked to fight an exhibition bout against the Berkshire welterweight champion at a boxing gym in Reading. Dave was reluctant, thinking he was not in the same class as the county champion. His mates goaded him on by saying ‘We never thought you was frightened Dave’. So Dave got in the ring, feigned with his right and hit the champion hard with his left and broke his nose.

When war broke out, a girl called Joan came to work at Stuart Tuners which was how they met. Dave went out with Joan a few times but Joan began to feel that he preferred going out with his mates. One day at work Joan confronted Dave asking ‘Who are you going out with tonight Dave, me or Jack?’ Dave said ‘Jack’ so Joan was upset and stormed off. Next thing Dave knew was that Joan was going out with a tall handsome American GI.

As soon as the War started Dave went to Reading and passed A1 for the army. But he discovered he was listed as reserved occupation against his own wishes.
He became a corporal in the home guard. Dave was later told there was a chance of getting into the forces by applying for the RAF regiment which he did and passed A1 again.

Dave met Joan again one Saturday night at a dance in the town hall. After the dance he walked her home and asked her to go out with him again. They courted regularly and eventually got engaged. When the war ended Dave and Joan got married. They were expecting Pam when Dave finally got called up. He served in the RAF medical corps for three years doing sister’s work preparing patients for operations and administering penicillin and other drugs.”

Dave’s son, Ken who lives in Caversham said “It’s been fantastic to celebrate today.   He’s been really looking forward to it and it’s given him a focus in life.  He’s coped very well in lockdown.  He’s always very positive and mentally he’s all there.  He loves singing and that’s why we’ve had a sing song today.  It’s a testament to Dad to see all these lovely people come out and celebrate.  It’s been lovely to have everyone including relatives from Dorset and Southampton, people in the street and friends from the church.”

Neighbour Liz Smith (pictured above playing the accordion) said, “I met Dave when I moved into the road 12 years ago.  I met him one day when I was cycling and he said, ‘Hello who are you?’ and we’ve formed a friendship and we’ve been friends for all those years.  He seems to be as vibrant and as strong as he has ever been.  He hasn’t faded away which is lovely.  He’s a great guy.  He’s always got so many phenomenal stories, and unlike me he can remember all the dates and names.  I hope someone is making an oral note of the history of Dave.  I know he was very proud to run the Rose & Crown and he has the sign in his living room.  A great character, one of Henley’s greats.”

Due to the proximity of the Rose & Crown to the Kenton theatre there were many celebrities came into the pub over the years including David Essex. When David Essex, came to the Rose and Crown he was playing a small part in a Kenton Theatre musical and desperately needed accommodation. Dave and Joan offered him a room for a small rent as they felt sorry for him. He moved in and they became close friends. Colin said, “On winter nights, Dave and young David sat round the fire singing, although Dave felt he was a better singer than David Essex and to quote “he couldn’t sing half as well as I could.”

After leaving the pub in 1980, Dave and Joan moved to Bell Vue Road in Henley. Dave became head gardener and estate manager for Beatrice Lily at Peelfolds in Henley. It was there that Dave met Lady Pamela Hix the Queen’s cousin and struck up a long lasting friendship with her.

Colin added, “Uncle Dave, your straightforwardness, your dignity, your family values and your generosity of spirit have been an inspiration to us all. Thank you and Happy Birthday.”