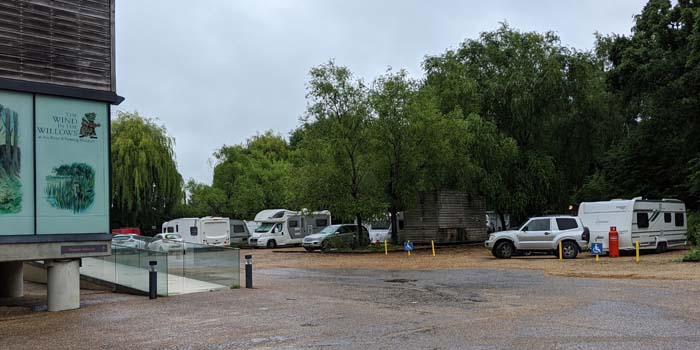 Reports have said, “Children seen on the bowling green throwing balls (probably jacks) and pushing a wheelbarrow on the green.”

A travelling community group were illegally parked in the River & Rowing Museum car park after they gained entry yesterday (Tuesday) at around midday.

The police were called and asked Mayor, Councillor Ken Arlett to attend as the car park is Henley Town Council’s land and rented to the museum.

Ken said, “I was called to go down there as the Town Clerk was not available. I met with three policemen (one man and two ladies), two members of the Parks Department and Sarah Posey CEO of the Museum. The police needed someone from the Town Council to go on to the land with them to serve some papers, as they travellers were there illegally. I went with two of the officers and met with two of the travellers, they were well aware of procedures. We asked them to move and in return they said they would only be there for a couple of days, they were very polite as were other members of the travellers that we spoke to. The papers were served and the police took all the numbers of registrations. The travellers did not intervene but were more than happy just to talk. They had come from Yorkshire and were eventually going to Wales and then back to Yorkshire. I would personally like to thank Barbara Taylor and the other two police officers for the professionalism that they showed and also Henley Town Councils Parks department for acting so quickly.”

To secure the area overnight, two boats on display in the car park were removed with the help of Southern Plant, 3D Marine and Hobbs of Henley who took the boats into storage.

The owners of fairground rides on Mill Meadows also decided to remove their equipment, after only reopening on Saturday.

Spokesperson for the River & Rowing Museum said, “Yesterday afternoon (Tues 7 July) a group of travellers came through the Museum’s car park gates onto Henley Town Council land at the rear during a scheduled working visit by Museum staff. Henley Town Council were immediately informed and all necessary measures are being taken by them.”

An enforcement company from Bristol was called who have agreed to come to the site at 9am this morning and remove the group. Ken added, “I am aware they arrived, but yet to here if the travellers have vacated the site.”

Henley Town Council also took the decision to close the toilets at 4pm yesterday. The toilets will be reopened when the group have gone.  They have also closed off any areas to their land where travellers or others could find an access. This will be reviewed in the coming days.

Deputy Mayor, Councillor David Eggleton has confirmed this morning that the group moved to Henley Station car park but at 1pm today they had left there and gone towards Reading leaving one caravan which they said they would pick up later.