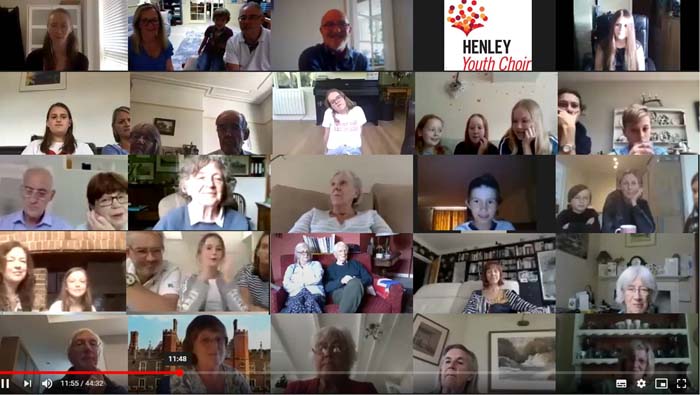 Henley Youth Choir have been rehearsing throughout the Covid-19 lockdown using Zoom and last Thursday evening their Summer Concert went virtual too.

Co-ordinating people on Zoom is tricky enough in itself without adding music, timing and words for a performance.  The concert played some excellent pre-recorded pieces by both the junior and senior members of the choir plus some great live solo performances.

Jessica Norton, Musical Director said, “It’s lovely to see you all and so many of you.  Welcome to our summer concert which is unlike anything we have ever done before.  This term we have been obviously been working virtually. We have been learning a quite a number of songs and the wonderful singers in the choir have sent in so many recordings which is fantastic and they have really pushed the boat and committed to a very strange term.  I’m incredibly proud of every single one of them.  They have persevered in this very strange situation.”

The concert opened with the juniors singing their favourite song of the term, Somewhere Over the Rainbow which Jessica said, “is difficult one to keep in time” followed by Raindrops Keep Falling.  Favourite Things from the Sound of Music was the juniors other performance which they sang two verses that they had written themselves which included “lollipops and fluffy bunnies!”

Martha Dickson opened the live solo performances by playing Sonatina in A minor” by Georg Benda beautifully on the piano.  She was followed by the sultry tones of Pati Gwiazda singing and playing Billie Eilish’s 8 on the ukulele.  Both Jack Dag and Louise Jennings were brave in singing some big solo numbers.  Jack sang Always Remember Us This Way by Lady Gaga hitting the big high notes and Louise chose Someone Like You by Adele who had a great tone and confidence.  Definitely some great talents to watch.

The seniors opened their joint performances with Vois sur ton chemin that they brilliantly sang all in French.  Their other piece was Seasons of Love from the Musical Rent.

Jessica ended the show by saying, “This term we’ve focused on songs that are uplifting with morale boosting messages.”  The whole choir then sang Happy by Pharrell Williams which had great harmonies and got the whole audience on the screen singing and clapping along.”

Henley Mayor and Mayoress Ken and Dorothy Arlett were invited to attend.  He said, “Thank you for the invitation this evening.  A special thank you to Jessica.  Amazing how you’ve put it all together.  It’s been fantastic and there’s fantastic talent in the Henley Youth Choir.  I could have been watching football this evening but I have enjoyed watching you all this evening. Hope you can all get back together very soon.”