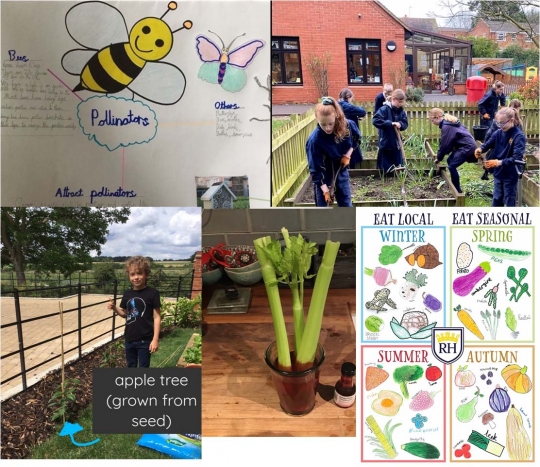 Nothing could split two schools in this year’s Environmental Science Competition organised by Greener Henley.  The joint winners were Rupert House and St Mary’s Schools.

Rupert House School’s entry was focused on food looking at ways to reduce food waste, growing your own food and engagement with the rest of the school with Meat Free Monday.  St Mary’s School’s entry was titled, ‘Science during Lockdown’ which looked at electric vehicles in Henley, science experiments in the home and growing fruit and vegetables.

The annual prize giving ceremony as like many other things went virtual with both schools logging in online.  Henley Mayor, Councillor Ken Arlett was also invited to log in.  Ken said, “Congratulations to St Mary’s School and Rupert House School in finishing joint first in the Henley Schools Environment Science Competition,  set up by Greener Henley and in particular to local resident Patrick Fleming, whose enthusiasm and knowledge seems to have inspired the children of both schools. Items such as EV Charging, Grow your own and Oil Slicks were the major topics, and the imagination of the children in their presentation were there for all to see. The judges were most impressed by the breadth of topics covered by both schools. I should finally thank the teachers that helped coordinate the children’s effort though the lockdown.”

Patrick Fleming from Greener Henley said, “The judges were very impressed by both entries and picked out for special mention: the presentation of the project as a blog by Rupert House School, their engagement with the rest of the school with the “Meat free Monday” assembly, publication in the local press, the grow your own initiative at home and in school and the analytical work on food waste. For St. Mary’s school the highlight was the oil slick experiment, which judge Maureen commended as an excellent example of practical science in the home, we were also impressed by the comparative analysis of electric vehicle charging, the descriptive work on life before and during lockdown, and the trees work which is a topic very close to my heart.”

Judge Maureen Smith, formerly a science teacher at Trinity School, commended both teachers Fleur Wells and Linda Wild for their dedication in encouraging and assisting the children to produce such good work.

Patrick added, “I was happy to announce that the three members of the judging panel had independently come up with equal marks for both schools so we awarded a joint first prize to both schools. We considered that this fairly represented the standard of work and the efforts put in by both schools.”

Fleur Wells, Science Teacher at Rupert House said, “We were delighted to take part, once again, in this important local competition which engages primary pupils with relevant scientific issues. We were delighted to learn more about the way our community eats and how we can change our habits to become more sustainable, and in turn healthy.”

Linda Wild, Head of Science, St. Mary’s School said,  “I am really proud of our children and all the hard work that they put into their science work this term.  The older children have enjoyed finding out more about quite complex issues such as how electric vehicle charging stations work, and designing their own.  The younger year groups have learned about topics including pollination, the design of nature reserves and oil pollution in the marine environment. The children have also shared their observations on how their local environment has changed during lockdown, and their own hands on experiences of getting involved in growing their own fruit and vegetables. We will look forward to sharing our trophy with joint winners Rupert House School.”

As well as sharing the trophy, both schools will receive a fruit tree to plant later in the year at the school.