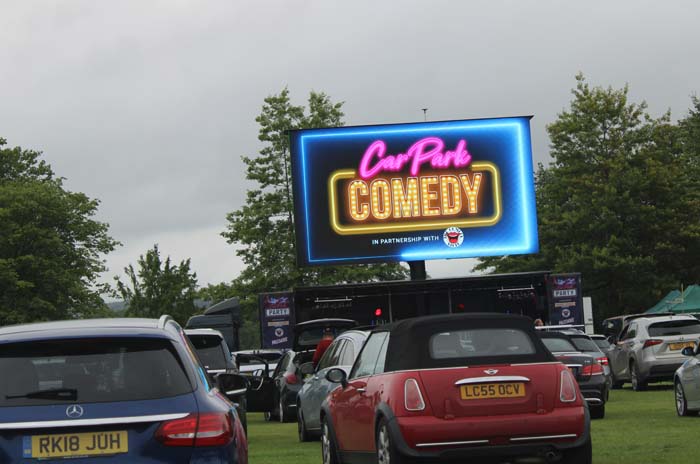 Guests at Henley Festival’s Car Park Party showed their applause by beeping their car horns and dancing on their roofs at the comedy, theatre and karaoke events from Thursday evening through to Saturday on Lion Meadow next to the river.

The event replaced the regular five-night Henley Festival which this year would have featured Madness and James Blunt who have agreed to return next year.  The event was supported by Henley Royal Regatta who allowed use of their site.  On Sunday the Festival lived streamed ‘Digital Edition’ which featured Will Young, Beverley Knight and Rory Bremner.  We’ll be publishing a review of this separately.

The Car Park Party Thursday and Friday comedy nights were in partnership with the Comedy Store which saw top comedians Dane Baptiste, Hal Cruttenden, Suzi Ruffell and Christian Reilly perform and were hosted by Stephen Grant, a regular headliner at The Comedy Store in Leicester Square.

The entertainers performed on a stage set up inside a large lorry and were projected onto a big screen above.  Guests listened via a special FM channel on their car radios.

Stephen Grant encouraged everyone to beep their horns, flash their lights or clap their hands outside their car windows.  Stephan said, “Welcome.  It’s very Henley.  I can see way too many, badly spaced personalised number plates!”  In between the sets he told more jokes about cars and life during and after lockdown.

Dane Baptiste took to the stage first and got the audience warmed up talking about transgender, pornography and strip clubs. Our favourite of the night, Hal Cruttenden who has appeared on Have I Got News For You spoke about the problems of doing a gig just for his family in lockdown and the economic disaster that’s probably coming with his advice being to watch any episode of Love Island.  He also asked the audience whether any of them had had Covid and had been in hospital – saying he’d seen people being applauded after leaving hospital but asking surely there were other people leaving the hospital who should have been applauded too!”

Next Suzi spoke about her family, her fiance who she was due to marry this year and moving homes.  She took the micky out of a Tesla in the audience and a helicopter which went over saying, “they didn’t pay to watch.”

The set finished with Christian Reilly, a musical comedian playing his guitar.  He showed how particular chords make you feel happy or sad.  He went on to show how any song can become sexy in an American accent by singing My Old Man’s a Dustman to the tune of Bon Jovi’s Livin’ on a Prayer.  He finished with a funny a love song he’d written called Feisty Irish Girl, a funny play on Ed Sheeran’s Galway Girl.

The finale events on Saturday were two mass karaoke sessions – the first got the audience singing songs from the Musicals including Let it Go from Frozen and the second, hits from 80s including Bohemian Rhapsody by Queen and Dancing Queen by Abba.  Many guests got out of their cars to sing and dance along with many dancing on their bonnets and roofs.  Nick added, “I’ve never seen so many sane adults jumping around on their posh cars (including Ferraris).  It was a riot from start to finish.  Many couldn’t sing but the lady in the mini convertible at the front with a loud haler fortunately could!”  The evening finished with a typical Festival firework display.

For the first time in many years, the weather for the first nights of this year’s Festival wasn’t great.  Nick commented, “We weatherised it very well with everyone in cars!  Overall it will go down as a Henley Festival to remember for all the good reasons.  We came out with something really good, that people really bought it into (shows were sold out) and people really enjoyed it.  We now know how to up sale our car park!” 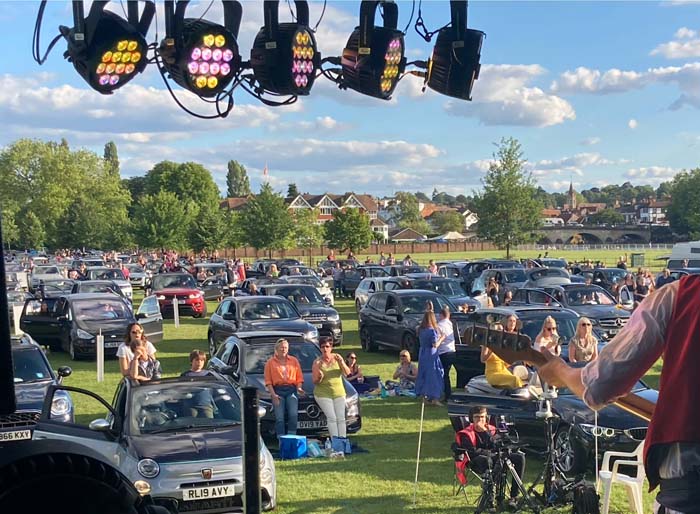