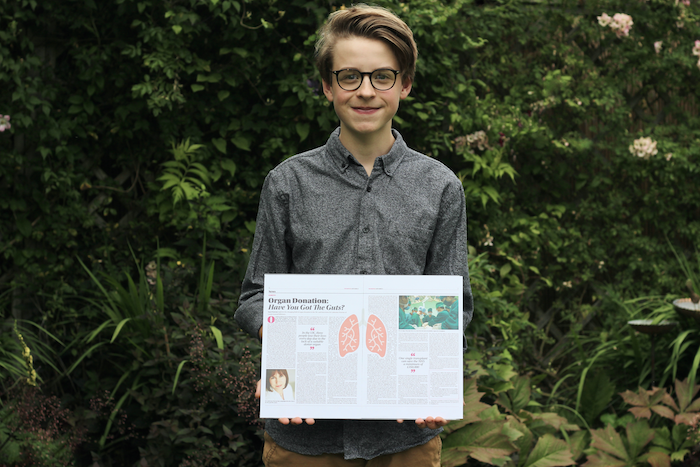 Local student Sam Penrose has won a prestigious award in the Shine School Media Awards for his work on Abingdon School paper, The Martlet. Sam, 16 from Shiplake, won ‘Best Standalone Piece’ for his article ‘Organ donation: have you got the guts’. For his prize, Sam will take part in  journalism masterclass with journalist Professor Simon Heffer and Glenda Cooper of City University in January 2021.

The Shine School Media Awards is a national competition recognising outstanding newspapers, magazines, podcasts or websites created by secondary school students.The competition was judged this year by Daily Mail Assistant Editor, Liz Hunt and Simon Heffer. Judge Liz Hunt said about Sam’s article on organ donation, “I could see this on the health pages of a national newspaper.” The results of the competition, which are usually revealed at a gala awards ceremony at Stationers’ Hall London, were announced by video message on Monday 29th June.

Sam Penrose said, “It was a massive surprise because we didn’t have this whole ceremony in London or anything, so it was just within the school day that it came through and I heard about it. I really wasn’t expecting it, to be honest, because I’d written the article not too long before and I hadn’t done a huge amount of journalism. I was really proud of the article but when it came through I was really surprised.” In place of a ceremony, The Marlet held an end of year meeting to celebrate their wins in the Shine Awards, and Sam was mentioned in both his House and Head’s assemblies for his accomplishment.

The inspiration for the story, which discusses the pitfalls of the UK’s previous opt-in organ donation system, came from Sam’s aunt, Dr Catherine Penrose. Dr Penrose, interviewed by Sam in his article, is a Consultant in Paediatric Intensive Care Medicine at Leeds General Infirmary, and the founder of the UK’s most successful organ donation campaign, Be A Hero. Speaking about how he came to focus on the subject of organ donation for his article, Sam explained, “I’d spoken to my aunt quite a lot about it because it’s something she’s heavily involved in with Be A Hero, and it’s just something I hadn’t heard about on mainstream news that much. There was so much happening with the law changing, making it an opt-out system, and it affects so many people for a topic that’s not talked about too much. It really needs to be covered, so it’s more about raising awareness, really.”

Sam’s eloquent, professional and thoroughly researched article was one of his first forays into journalistic writing, making his achievement all the more impressive. However, he has had plenty of prior experience working on school publications, having previously focused on design, and is part of the senior leadership team on The Martlet as Deputy Editor. He reflected, “For pretty much my whole time at the school I’ve worked on different publications which have slowly become more professional as I’ve gone up the school. I’ve mainly worked as a designer because that’s something that has interested me. I’m into Art and DT and things like that, so I always like to have the role as the person who makes the physical copy of it. I’ve also always liked creative writing. At the moment, even though I’m not doing English, I’m doing an AFA in Creative Writing, and I’m really enjoying that. I’m really liking developing my writing style. Even in things like Religious Studies, which I do, writing the essays, researching them, putting in sources, seeing all the different sides of the argument, I think is really helping me with my journalism.”

The Martlet also won the ‘Best Front Cover’ accolade in the Shine Awards – another success for Sam, for though his story wasn’t featured, he was responsible for the cover design. He said, “I’d adapted it from the previous people who’d made the template for the paper, but things like the logo, that’s my logo now. I’ve worked on different things like simplifying the cover so it was less complicated, something you’d more easily pick up. So with the title just being ‘coronacrisis’ and having a single person signifying isolation, I really liked how simple it was but was still quite powerful.” The Marlet was also Highly Commended in the Best Print & Design, Best Overall Content and Best Newspaper categories.

Sam Penrose has just finished lower sixth at Abingdon School, studying Art, Religious Studies and Design & Technology. Though he hopes to study architecture at university, he intends to carry on writing. “I think with things like university journalism, that’s again a really good chance to get back into it and keep writing different things,” he stated. “Especially with creative writing, I think I’ll carry on in my free time.” He will also be attending a journalism masterclass with Simon Heffer and Glenda Cooper in January next year — the reward for his triumph in the Shine School Media Awards.

Sam’s article is available to view online in The Marlet.