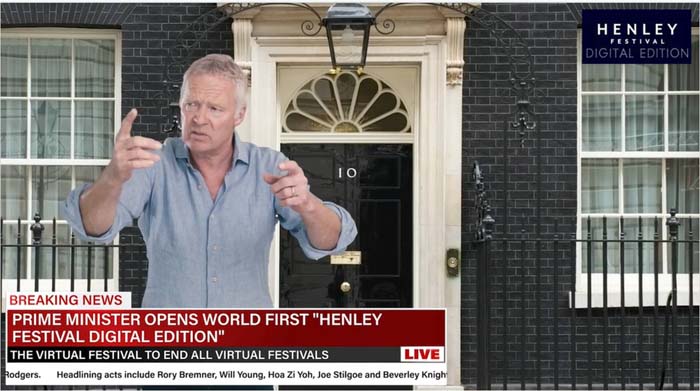 Those who were missing the wonderful sights and sounds of Henley Festival this year on the river bank were reminded of these in the opening minutes of the Festival’s Digital Edition on Sunday evening with a video filmed at the Festival in 2015.  We certainly have missed this Henley highlight and wondered how this would translate onto a digital screen.

As the title of Queen song,  The Show Must Go On… opening the show was comedian and impersonator Rory Bremner who was due to appear live at this year’s Festival. His brilliant opener as PM Boris Johnson, outside No 10 saw Rory bumble along just like Boris, opening with “Prime Minister Captain Corona here at your service! I became MP for this great constituency of, of, (oh yes) Henley on Thames to succeed the great Michael Heseltine.  They wanted a heavy weight with flamboyant hair.  I ticked every box.  I was MP for 7 very happy years but my memory of these are very vague.  I then went to London and it’s been down river ever since!”

Host for the evening, cricket legend, David Gower then welcomed everyone and said, ““I’m afraid you still have to provide drinks and snacks and if you’ve got a bottle of champagne out, then great. If you’ve put a suit and tie on, even better. Hopefully you haven’t had to furlough the butler and he’s there to serve you all.”

Will Young was the first musician to perform with his band. Will has performed twice live at the Festival in 2011 and 2016.  He performed four tracks, Love Revolution, I Just Want a Lover, We Feel Joy  plus a great re-arrangement of Light My Fire by The Doors.

Video messages were screened throughout the evening from acts who were due to perform live this year which included comedian Milton Jones, Sophie Ellis-Bexter and Madness front man, Suggs.  Suggs said, “One of the happiest memories of my life was when I spontaneously jumped on stage with Sting — he wasn’t too pleased but I think we got over that. It got us the gig and I wish we were there but in the words of the great Greek philosopher Arnold Schwarzenegger, we’ll be back.”  Nile Rodgers who played the festival 2 years ago also sent a message.  He said, “I went to a place I’d never been and I can’t wait to come back.”

Classical music was the foundation of the Henley Festival when it first started 38 years ago and it has continued to be an important part of it.  Sunday was no exception with the very talented pianist Hao Zi Yoh.  She played Rachmaninov’s arrangement of Liebeslied by Fritz Kriesler and Chopin’s Ballade No 3 in A flat major effortlessly and with wonderful expression.

Rory Bremner returned to be interviewed by David Gower.  He spoke about how we’re living in a bizarre world and it’s like watching box sets!  He said, “You couldn’t make this up!”  He told David how he started his impressions from his love and sport (particularly cricket and commentators) and then moved on to politicians and comedians.  He went on to do a brilliant Donald Trump talking about the coronavirus saying “I like to surround myself with lots of positive people!”

The Henley Festival has helped many talents go on to bigger things and that’s true of musician Joe Stilgoe who performed on Sunday.  He was given an envelope by David Gower with a list of songs by previous Festival headliners and a different music genre to play them in.  The medley showed of his brilliant musicianship, versatility and being able to just play and sing off the cuff.  He performed Culture Club’s Karma Chameleon as a JS Bach composition, Burt Bacharach’s What The World Needs Now as a heavy metal number, a ragtime arrangement of Every Breath You Take by The Police, a Motown version of Shirley Bassey’s Diamonds Are Forever and Elton’s John’s Crocodile Rock as a Viennese waltz.  He then performed a funny cover of Four None-Blondes, What’s Up.

Soul singer, Beverley Knight was the headliner on Sunday evening.  She kicked off her set with Made it Back and went on to sing Middle of Love, Piece of My Heart and the song most people associate with her Shoulda, Woulda, Coulda.  Dubbed the Queen of British Soul, Beverley certainly still earns her crown as she showed off her huge talent, hitting the high notes with ease and performing her set with high energy despite not having a live audience.  She treated the audience to a new upbeat song she’d written about social media called Now or Never and finished with fitting finale encore of Chakka Khan’s I’m Every Woman.  Afterwards she said, “This has been such a lifeline for me.  When you sing and make music it’s like you’re compelled to do it.  So this has just been wonderful for us to do this on stage this evening.”

At the start of evening David Gower spoke to Stewart Collins, Creative Director of Henley Festival.  He said, “My role is seen as a chef to assemble all the ingredients.  This year it was very different.”  It was very different but we think that Stewart really pulled off a great dish of virtual entertainment in these strange and difficult times on Sunday. And as Beverley added, “Music will always find a way.”

Nick Mattingly CEO of Henley Festival spoke to us afterwards, “We were pleased to have so many offers to be part of the Digital Edition.  The Festival seems to attract spirit of kindness and people’s generosity.  Many acts offered their time off their own back.  There were more people than we could use.  The event lives on afterwards.  It is available for people to buy and watch via the website. We were hedging our bets whether people would be keen to socialise and watch on warm summer evening.  We were bowled over by the money we raised for the local charities through the silent auction.  Everything is set for next year, ticket sales are progressing well and the acts are lined up and ready to get back on the stage.  It just shows how much Henley Festival is loved by those who come and play it.” 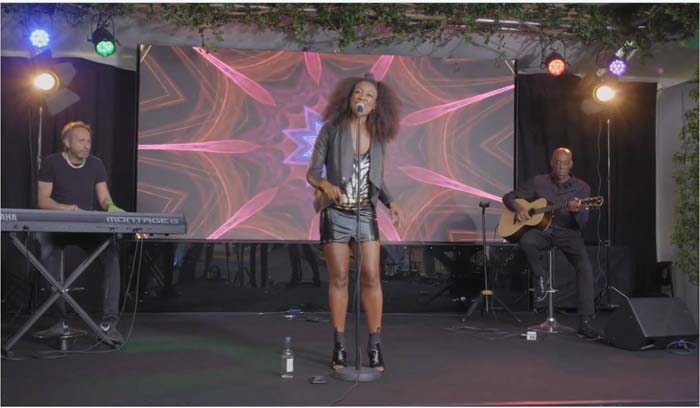