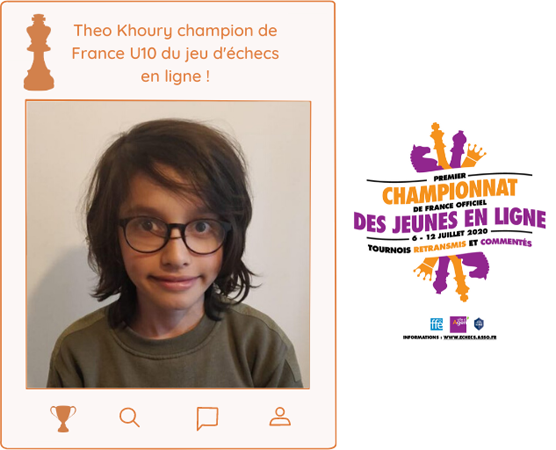 Ten year old, Valley Road School pupil Theo Khoury who has dual British and French nationality last week won the French national chess online championship in the U10 category with 9 victories out of 9 matches, adding this to his British Championship U9 accolade he won in July 2019.

Since only taking up chess in the summer of 2018, Theo has gone from strength to strength. His Dad, Wadih said, “When Theo was about three I first introduced him and his brother to all sorts of board games and showed him the basic rules and moves. It was only a couple of years ago in the summer holidays when he was bored that he started playing on the Chesskid.com website. The more he played, the more he got hooked. He started to win more and more and then found there were not many opponents at his level. I also got him a chess book from the bookstore which he devoured. Very quickly he could beat me.”

Theo’s Mum Jessamine said, “In the October he took up chess he played with his Uncle who said ‘I think he’s quite good.’ My brother then invited a friend of his who was a Grand Master to play a few moves with Theo. She said he was good and if he really enjoys it get him into a chess club and put him into a few tournaments.”

In November 2018, Theo was taken by his Dad to Maidenhead Junior Chess Club and on the day they were playing a tournament. Wadih commented, “Theo wasn’t keen to join in to start with but by the end he played a few games and said that he want to play more tournaments so that he could the gain the number of points he needed to quality for the London British Championship.”

Theo then entered 2/3 tournaments a month, progressed well and qualified for the TeraFinal stage of the UK Chess Challenge, in which 40,000 school children participate. He also participated in the British Chess Championship in Torquay in July 2019, and won the Under 9 category, becoming British Champion. Wadih said, “I thought he might get into the top 10 but to win it was unbelievable. Theo was jumping around when he won and was given the trophy by a British Grand Master champion and a nice cheque.”

After winning at the British Championships, Theo was invited to be in the junior national team and went to play in Estonia where he was up against some tough opposition including some Russian players. Wadih explained, “Some of these players have been playing for five years or more so Theo having only played for only two has a lot to catch up. He has two good coaches: Zedin Sujoldzic from Caversham and International Master Adam Taylor.”

“Theo eats and drinks chess. Before going to school he’ll even play. He’s leading it,” explains Jessamine. Theo is also good at Maths; he was in the winning team at the school Maths tournaments held last year at Rupert House School and Pangbourne College.

On winning the French championship, Theo said, “I was super excited to win.  My next ambition is to beat a Grand Master.  Theo enjoys playing both online and with a board.  He added, “I like them equally, though it is easier to visualise the pieces in my mind when playing with a real board.”

After travel Covid-19 restrictions are lifted, Wadih hopes to take Theo to Switzerland for a tournament he has promised him.