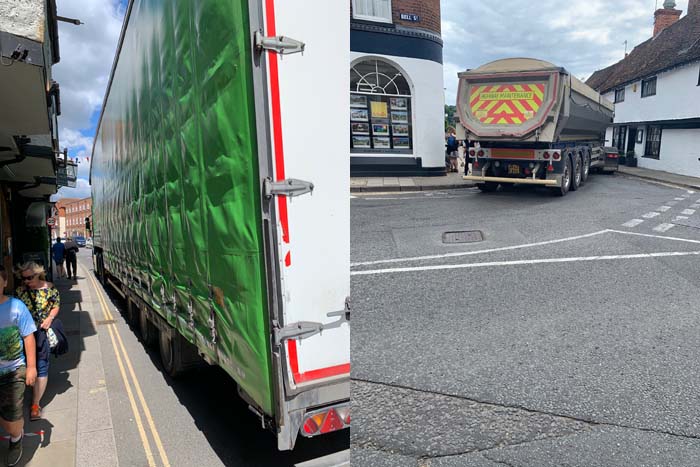 Over many years, Henley Town Council have been looking at ways to reduce the number of HGVs who make short-cuts through the town and have been asking Oxfordshire County Council (OCC) to apply for a Traffic Regulation Order (TRO) to ban vehicles over 7.5 tonnes.

Bell Street resident and retired solicitor, Amanda Chumas has started to put forward a case to OCC’s Cabinet Member for the Environment, Yvonne Constance for the introduction of a TRO in Henley with support from Henley’s County Councillor, Stefan Gawrysiak.  Amanda said, “There has been a marked increase year on year in the volume of HGVs driving through Henley since the last published traffic survey in 2013. Back then, according to the survey, HGVs made up only 3% of total traffic flow but contributed 20% of the NOx pollution. However, on top of this, since lockdown, the number of passing HGVs has ballooned because lower than normal traffic levels have encouraged HGV drivers to use the town as a cut-through to shorten their overall journey time.”

A TRO may be implemented for one or more of the following reasons:

HGVs with a legitimate reason to deliver or collect in Henley or within a 10 mile radius would be given a permit under the TRO.

Yvonne Constance has acknowledged to Amanda that this is the relevant legislation and has given her the town of Burford as a reference where a TRO has just been introduced after 18 months plus to progress it through its regulatory stages.  Burford paid in the region of £130,000 to cover the costs of marshalling the evidence, submitting the case and the costs incurred by OCC’s legal department in taking the application through to its formal conclusion.

Amanda has seen first-hand how the large HGVs are dangerous to pedestrians, she explains, “It is inappropriate for HGVs to use our town as a cut through, because of the ancient layout of our roads with their narrow pavements and sharp turns. I live near the junction of Bell Street and New Street. On a daily basis I can see just how dangerous these vehicles are. In order to make the 90° left-hand turn they have to slow to a halt, thereby bringing surrounding traffic to a standstill, so that they can swing out far into the lane of the oncoming traffic in Bell Street in order to complete the 90 degree manoeuvre. If they fail to swing wide out enough, invariably the rear wheels of the trailer mount the pavement outside Savills. It is a wonder to me that no one has been badly injured on that corner already. This junction is just one example. I understand that similar problems occur elsewhere in town.”

Bell Street residents live with the constant vibration and noise from HGVs passing through and damage to their timber framed listed homes can be seen.

The most important reason for banning HGVs is the air pollution they discharge.  It is well researched that air pollution can cause asthma or even worse premature death.  Last week a new air pollution monitor was installed in Greys Road which will now provide daily accurate stats of the very small and very dangerous particulates which can get into the blood and is the first to be installed in South Oxfordshire.  If it proves Henley has a particulate problem then SODC have to legally take action.  Amanda said, “This is an excellent first step.”

How can you help?  Amanda would like to you to write comments in the box below, write to Stefan stefan.gawrysiak@oxfordshire.gov.uk and MP John Howell howelljm@parliament.uk and copy in Amanda at amandachumas@gmail.com

Health and Wellbeing: 5 Facts About CBD Oil
Scroll to top