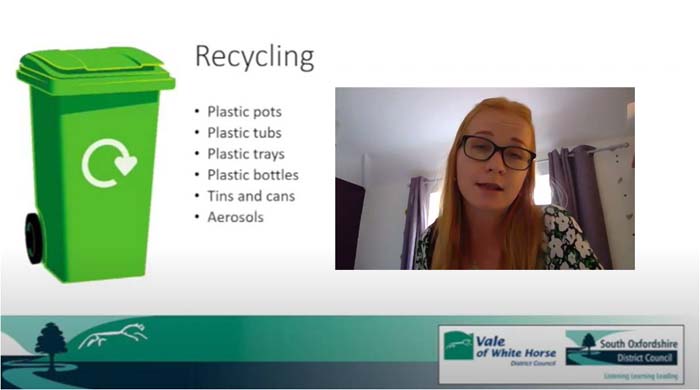 Did you know that stained pizza boxes, crisp packs, cling film and tissues should not be put in your recycling bin?  What goes in which bin?

Guests at the Rotary talk this week by Jessica Beare, Waste Recycling Officer at South Oxfordshire District Council (SODC) informed listeners of this and how the council disposes of its waste, why it’s important to recycle and how the COVID-19 pandemic has affected the waste industry both as a whole and at a local level.

Jessica said, “The UK’s target was to recycle 50% of its waste by December 2020.  The current UK percentage is 45% and this target won’t now be met because of Covid-19. At SODC our recycling rate is 65%, one of the best districts in the UK.”  One of the reasons for the increase in people recycling their waste was what Jessica called the ‘Richard Attenborough affect’ which saw an increase for 12 months after the Blue Planet episode which showed the impact of plastic pollution has on sea creatures.

Jessica explained that SODC’s good rate was due to the council offering mixed recycling making it easier for residents and none of their food waste goes into landfill.  The food waste goes into anaerobic digesters which releases methane that is then sold to power homes and the fertiliser it produces is sold to farmers.  The general waste is incinerated and powers 60,000 homes across Oxfordshire. The metal remnants are recycled and the ash is sold to use in construction. The recycling is first sorted by pickers and then goes onto conveyor belts that shake out the paper and plastic and magnets pick out the metals.  The plastic is then melted and sold on to manufacturers.

Not sure what things go in which bin? Go to the Binzone app.  Jessica explained, “Contamination is our biggest problem with recycling, one person can affect the whole street’s recycling.  Food waste is the worst.”  Jessica showed examples of symbols on products and the true recycling ones to watch out for.  She also explained the ‘Oops cards’ that are now being left on contaminated bins or those with incorrect items in.  One listener said he had an ‘Oops’ card for a bag of shredded paper. Jessica confirmed the problem with this was that the bag was not a clear one.

Covid-19 has had an impact on new recycling legislations because Parliament was suspended and the Scottish plastic bottle deposit return scheme has been postponed for at least a year.  Covid-19 has had a big impact on waste collections because of an increase in household waste, the collectors were unable to social distance and there were staff shortages due to illnesses.  However Jessica said, “We were one of a few districts that did not drop our household collections – they were always our priority.”

All councils have their own recycling methods.  Jessica commented, “At the moment we can’t have a blanket approach.  Some things just won’t work in all areas, age groups or types of homes (houses vs flats).”  For example, SODC have to pick out the biogradable food waste bags currently because they cannot go in their digesters but in other areas they can.  Jessica commented, “Putting food waste in plastic bags is actually best for us as we can easily see these.”

Asked whether we could have a Terracycle drop off station for crisp packets, cat food pouches, Pringle boxes etc in Henley as the nearest one is in Sonning Common.  Jessica suggested that perhaps the Rotary could take this on as project.

You can watch the full talk at https://www.youtube.com/watch