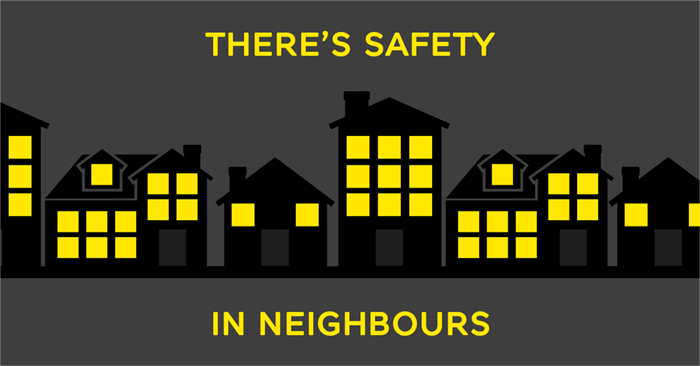 Now that we’re all starting to ease out of lockdown, we need to make sure that as well as keeping ourselves safe, we’re keeping our homes and neighbourhoods safe.

More people out and about means burglary is expected to rise, which is why Neighbourhood Watch are launching a new campaign, in partnership with the Home Office, to warn Neighbourhood Watch members, and non-members alike, and provide practical tools to prevent burglary.

Neighbourhood Watch have created Safety in Neighbours – a fresh, thumb-stopping social campaign aimed at a younger audience of 20-50 year olds, launched this week.

John Hayward-Cripps, CEO of the Neighbourhood Watch Network, said reaching out to these audiences will expand the impact Neighbourhood Watch can have in the UK:
“What we know about younger audiences is that they are not usually connected with their neighbours until there’s a problem that needs to be solved. Their relationships are often reactive rather than proactive. We also see them looking to action and own local solutions to issues in their area such as burglary.”

The campaign uses hyper-targeting on Facebook to reach people in the UK’s most burgled areas – encouraging them to start a proactive relationship with their neighbours, so as a community they can spot warning signs and prevent burglaries. The campaign will also be shared across Neighbourhood Watch Network’s Instagram, Twitter and national volunteer network.

The campaign is to encourage people to use the WIDE combination of security measures in their home, which reduces the risk of home burglary by nearly 50 times more than those with no security. The campaign directs them to a simple prevention checklist, local crime map, and membership page.

John added, “We believe Neighbourhood Watch can act as the thread that knits local communities together, sharing tools and practical advice to keep our neighbourhood’s safe and vibrant. We believe there’s safety in neighbours.”

Neil Gunnell, Neighbourhood Watch Multi-Scheme Administrator for the Henley Sector said, “It’s easy to consider Neighbourhood Watch groups as some kind of ‘net curtain-twitching society’.   In fact they are simply about people being wary and considerate for each other.   It’s very easy to stay informed individually, but during the Covid period very many of us have also been supporting our neighbours, and really this is just an extension of that, community spirit extending to crime and fraud awareness.

My own local group, which has been running for a decade or more, now has over 200 members in or around the Wootton Manor estate.   During the peak of the Covid crisis, local updates and contributions and offers of help were emailed daily to the group, and many have said that our community is stronger than at any time in the decades they have lived here.  Anyone in the group can email the group without all email addresses being shared, and we’re very good now at letting everyone know if there are doorstep callers around.   We consider ours a Neighbourhood Network for anything going on in our part of town.

While Neighbourhood Watch itself has been around for nearly 40 years, at a wider level, we’re in the process of reviewing and renewing groups across South Oxfordshire.  Just last week, as a result of request we created a scheme for St Andrews Road and in 48 hours, by word of mouth, it has 25 members. Other schemes exist around the town including a large one for the streets around Valley Road School.   Anyone interested in joining or creating a scheme can contact nhwhenley@gmail.com”