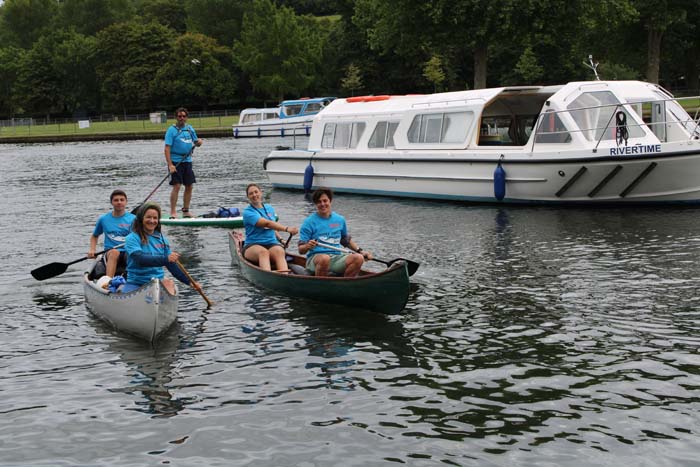 A team of canoeists and a paddle boarder yesterday reached Henley on their 220km Thames Paddle river challenge from Lechlade to Teddington in aid of the Rivertime Boat Trust which provides an accessible wheelchair passenger boat for adults and children with learning and physical challenges.

Heading up the challenge is head skipper of the Rivertime boat Lucy Herbert and she’s been joined by Amy Karlsson, Oliver Summerland, Deanne Burkimsher and Peter Elliott on the paddle board.

This year, like many charities, the charity had to suspend all operations, outings and events so in April Lucy decided to do the challenge to raise money for river trips, activities and learning to take place in 2021.

We caught up with them at Phyllis Court Club.  Lucy said, “Both Amy and I have done this journey in the last four years.  Amy paddle boarded from Lechlade to Henley last year and in 2016 I joined five other ladies from Shiplake College and we rowed a heavy wooden fixed-seat cutter from Lechlade to Teddington in 3 days so there’s always been plans for another journey.  We thought this time we would do it in open canoes and camp each night.  The other times we’ve been picked up each night and dropped off in the morning which wasn’t as much fun as this.  We’ve been enjoying cooking on the campfire and swimming in the river in the morning. We’ve  also enjoyed a couple of pub lunches on the way.”

The team started last Friday and are over half way there and are due to finish tomorrow, Thursday (30 July).

The biggest challenge for Peter on the paddle board has been the wind, he said, “A head wind slows me down no end and the rain knocks your enthusiasm out of it.” Peter is a new volunteer for the charity.  He understands though the importance of the work the charity does and commented, “Seeing people’s faces when they come off the boat.  It’s great to see disadvantage people actually smiling and enjoying life with their disabilities.  It’s nice to give back to people as well as being involved on the river.”

Lucy commented, “Peter is standing up all the way.  He’s brought in some good sponsorship money as no one could believe he could do it standing up for 220km.”

The crew have faced heavy rain over the first few days and had do some bailing out of the canoes.  In Oxford they decided to shelter under a road bridge.  Lucy explained, “We thought it would be a good place to keep dry and then a big truck came over and there’s was a gap between the bridge and we got absolutely soaked.”

The challenge has already reached Lucy’s original target of £5220 and they’ve had lots of donations and people cheering them on their way.  Lucy added, “The best bit has been the support along the bank.  Every town we’ve been through there’s been people with ‘go team’ signs and as we go down I think it’s only going to get busier.  We’re pulling up and chatting people about what we’re doing.”

The money raised will go towards subsidising trips next year for people who can’t afford them and for a new set of children’s educational activity packs that the charity has developed for them to enjoy on board.  They include feely bags with boat related things in them.  Lucy commented, “It’s been a challenge to design the activities to suit a range of disabilities but we’re looking forward to seeing some of the same children again enjoying them whilst they are on board.”

To donate £10, text RIVER to 70191 or visit Justgiving.com/campaign/rivertime220