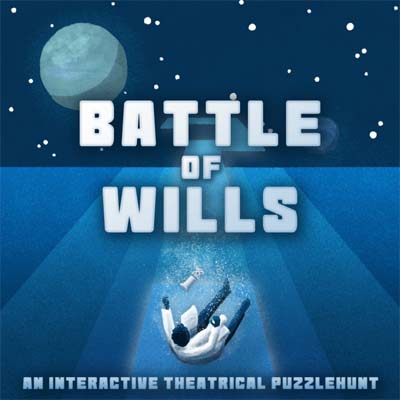 Battle of Wills is the debut production from Tangle of Keys – a collective of students and graduates from Henley and the local area all with a passion for theatre, puzzles, and narrative games. Their event manager, Robin Nice, started Tangle of Keys after spending 3 months working in Camden, London for live action games company A Door In A Wall. Robin, a resident of Damer Gardens said “I loved working on such interesting projects and events. I’ve always adored puzzle games and acting, being able to combine them is a dream come true. I know this is what I want to be doing for the rest of my life, Battle of Wills is just the start!”

Other members of the production team include their narrative director, Alice Barton, a computer games design student and Henley college graduate and creative director, Ben Hughes.  Also known as Hudson Hughes, he is the director of the wickedly funny Wednesday In Space – a sci-fi feature-length comedy shot entirely in a garage in Shiplake.  The Battle of Wills cast includes stars of Wednesday In Space, members of Acorn Music Theatre Company, and other local thespians.

Battle of the Wills starts with Sir Ralph Norbert dying after an awful incident involving a late-night swim in the river. Was this an unfortunate state of affairs or is there something more sinister lurking beyond the shadows?

You are called to the reading of Sir Ralphs will and now it is your turn to uncover the truth and solve the case of his mysterious passing.

Players are welcomed to the event in teams of up to 6 and can expect to explore Henley-On-Thames and the Red Lion Hotel, solving puzzles and speaking to characters to solve the case that surrounds the death of Sir Ralph Norbert.

The event will take place on the 5 September 2020 with 5 sessions available on the day; 1 pm, 2 pm, 3 pm, 6 pm and 7 pm. Each spanning 3 hours. Each session is limited to just 20 tickets, make sure to get yours soon to avoid disappointment!

Despite current events, Tangle of Keys has pushed through to make their event as safe as can be by implementing a variety of regulations and systems that aim to protect anyone that arrives at their door. Everyone attending (including cast and crew) will have to wear masks whilst inside or face to face with actors, there will be a queuing system in place for actor interactions and commonly used props (which will also be cleaned frequently), and teams should come from the same household or social bubble. Teams will follow a one-way system through the hotel, designed to allow multiple sessions run at the same time without crossing paths and minimising the number of people inside shared spaces at any one time.

For more information and to buy tickets visit www.tangleofkeys.com

Have a burning question? Try our FAQ page – www.tangleofkeys.com/faqs

Still not found what you were looking for? Drop us an email at info@tangleofkeys.com and member of our team will get back to you as soon as possible