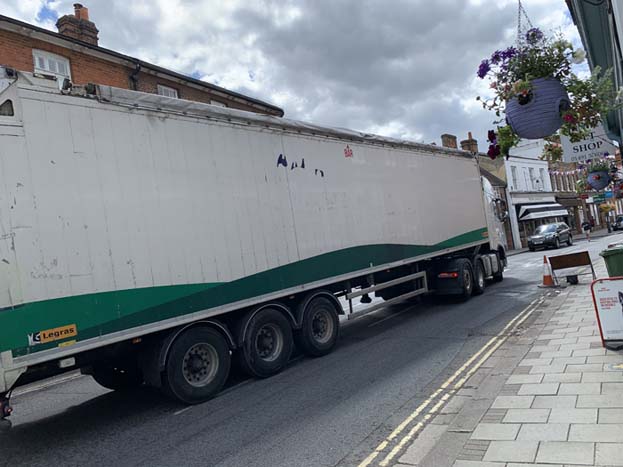 Since launching the petition to back the campaign for Oxfordshire County Council to obtain a Traffic Restriction Order (TRO) for Henley which would ban HGVs making a short-cut through the town, some residents are asking for proof that HGVs are doing this.

Amanda who initiated the current campaign, lives near the junction of Bell Street and New Street and regularly sees huge HGVs bringing the traffic to standstill.  In answer, she said “I’d point to the numerous foreign number plates or other signage on these vehicles that suggests that they are a long way from home, plus you just have to watch as droves of them come into Henley via the Fairmile, drive up Bell St before turning left (with great difficulty) down New Street and Thameside and then turn left over the bridge to go up White Hill towards the A404/M4 i.e going West/East. By the same token there are a lot of HGVs coming through town to go straight out on the A4130 as well. However, if you are looking for official stats, then I’d point to the independent traffic survey (by Stantec) carried out in 2015. It demonstrated overwhelmingly that most HGVs are cutting through the town.  For example, it showed that between 07.15 and 09.45 on the 14 May 2015 – 125 HGV entered Henley and 101 passed through. So, the vast majority HGV’s were not delivering to Henley.

The TRO will not prevent access for HGVs with a genuine reason to come to Henley, or within a reasonable radius of it, in order to deliver or collect. Amanda said “Certainly, the town needs to be serviced to continue to thrive, but equally we have become so inundated by HGVs cutting through to save time on their journeys, that they are now “strangling” our town. Indeed, if this is allowed to continue unchecked, in my personal opinion, it is quite likely that both residents and visitors will be deterred from using the centre of town. Where will our shops, restaurants, cafes and bars be then – without custom? They are already fighting for their survival as it is with the ramifications and fall out of coronavirus. Certainly, if we succeed in getting a 7.5 tonne weight limit, then this will effectively prohibit through HGVs, because the route planners will no longer be able to direct them through Henley without breaking the law!

OCC has already acknowledged that Henley is not suitable for taking large HGVs as can been seen from two publications that OCC have already issued: the Oxfordshire Freight Quality Partnership Lorry Route Map and para 17&18 of the paper entitled “Connecting Oxfordshire: Local Transport Plan 2015-2031.

Over the years attempts have been made to secure voluntary co-operation with hauliers, but these have failed. Indeed, frequently, when hauliers have been asked to stop coming through Henley and stick to the SRN, they have responded by saying that they appreciate how unwelcome their trucks are but they will not stop until a Weight Limit makes it illegal for them to use our town as rat run. That is why we need a Traffic Regulation Order (TRO) to get a legally binding solution.”

Will the TRO not just displace the HGVs on to neighbouring towns and villages?  Amanda is urging Henley Town Council to liaise and work with them so that they are protected too. She states, “I’m no way suggesting that we shift the problem out of Henley on to other parts of our rural neighbourhood. Instead, I am suggesting that these monsters be forced to stay on the Strategic Road Network (SRN) of the M4, A404, M40 and A34 – which was designed and built to take them.”

Amanda concluded “I would like to express grateful thanks to Stefan Gawrysiak for his help and support in this matter. He will be critical to the campaign going forward. As Henley’s representative on OCC, he will make our case for a TRO under S1(1) Traffic Regulation Act 1984 on multiple grounds. OCC, is the relevant highway authority for Henley. It has to be persuaded to make the application on our behalf (at Henley’s expense) for a Traffic Regulation Order to introduce 7.5 tonne weight limit for the town.”

To ensure that all the councillors of OCC fully appreciate the strength of local feeling about this matter Amanda asks that you sign the petition which the Herald has launched.

(Please note that you do not have to pay anything to sign the online petition. Just close the donation pop up that the change.org organisers include to get contributions for their own overheads. Then you will then be able to continue to sign the petition on the next screen – please leave a comment as well if you’d like to).

Additionally, if you’d like please write to the press or email Stefan Gawrysiak s.gawrysiak@henleytowncouncil.gov.uk

YOUR VOICE WILL BE HEARD: The petition and its comments, emails and letters will all be included as evidence in the case submitted to OCC. 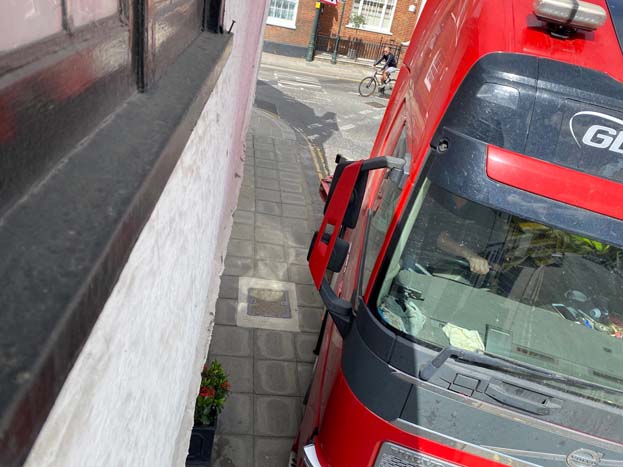