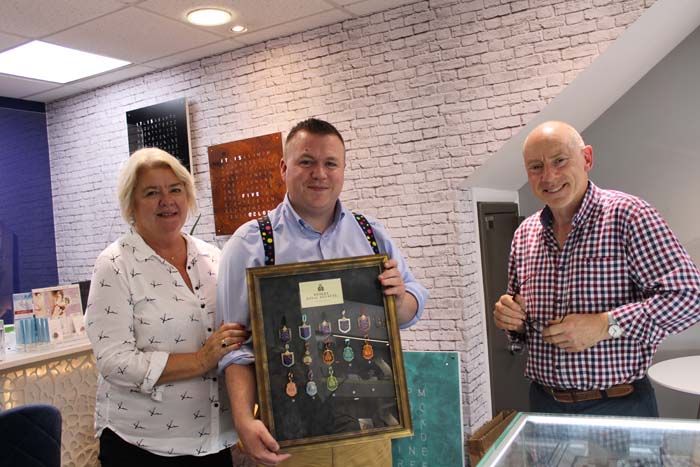 For once David Rodger Sharp, who owns the jewellers in Henley, was on the end of surprise and a special thank you gift on Monday afternoon from Mark Evans who presented David with a display case of his Henley Royal Regatta metal badges.

David was nominated for 3 awards in the Henley Herald Champion awards last year for his charity work and his first class customer service. He is always generous and kind to people in the community.  One example just a few weeks ago was he gave a ring to Eve Lloyd after she lost one that she had only bought the day before after saving up for it.

Mark first met David through the Henley Business Partnership 3FM networking meeting.  He went to discuss his insurance quote with him and ended up buying a watch from him.  Mark said, “Since he’s opened, David has been a great credit and asset to Henley.  He’s been helping lots of people and supporting all the charities and we wanted give him something nice to say thank you and to recognise this.  I didn’t want to give a boring gift like I normally do like a bottle of something.  I thought this would be something that no-one else could give you to put in your window and is very synonymous with Henley on behalf of the people of Henley.  I was supported by Henley Royal Regatta.  I’m quite attached to these but they’re were just in the drawer by the side of my bed and I thought they would be better in your window.”

On opening the gift, David’s initial reaction was “Wow!”  Afterwards he said, “I’m really quite emotional.  I don’t think I’ve done anything to deserve such niceness.  Henley has been lovely to me.  I know how important Regatta is to Henley.  I would love to give you (Mark) a hug if I could.  I would love it in the window.”

The display case has badges from the last 13 years and has space for another 7 more years.  Irene Dallas, a good friend to both Mark and David, was also in on the surprise. Mark promised to remain a member of HRR so that the spaces could be completed.  David is in the process of applying to become a member of HRR but the waiting list is currently 7 years long.

David added, “I’m incredibly humbled.  I was looking through some stuff this morning and found about 10 thank you cards I had received in the last 6 weeks.  The people of Henley are so kind.  That’s what I love about Henley is the generosity of everyone.  People go out of their way to assist one another.  I do nice things, it’s the right thing to do.  Fortunately I can do these things and it is why we do them.  If I can give something back to change just one person’s life then I always will.  It’s very infrequent that I’m lost for words.   Mark has become a really good friend.  I encourage people at the end of the day to come into the shop and have a natter.  It must the Scottishness in me.  Come in for tea and chat or we do have a fully stocked bar!  People of Henley have made me feel that I’ve been here for the whole of my life.  I’m so honoured and touched.  These are a big deal as they are collectors items.”