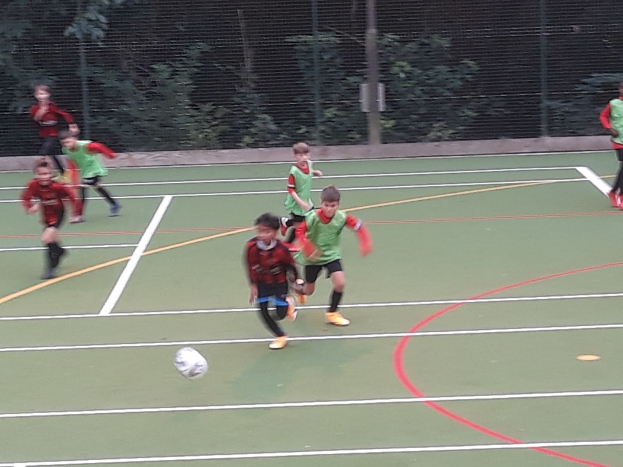 A friendly match against AFC Caversham proved good preparation for the Henley Hurricanes U10s ahead of the new season. The game was an evening fixture, played under floodlights on the artificial pitch at Shiplake College. This was a last-minute change of venue, and the teams were grateful to the College for hosting the match at short notice.

The game started at pace, both teams trying to come to work with the bounce and speed of the surface. The Hurricanes had the first chance to score, Oscar Robinson’s shot well saved from close range, and Jack Callaway hitting the rebound against the post. At the other end, Caversham were also creating chances and the Hurricanes were forced to defend. The deadlock was broken by the Hurricanes, a pass from captain Dominic Ellis was struck into the net by Oscar Robinson from just over the halfway line.

Conceding the goal served to galvanise Caversham, who put the Hurricanes under a period of sustained pressure. Despite good work from goalkeeper Harrison Carpenter Buckett and Will Lindsay on the left, Caversham scored an equaliser at the end of the first half.

The second quarter began with a great passing move between Luca Currie, Jack Callaway and Oscar Robinson, moving the ball from the Hurricanes’ half to the goal. Oscar Robinson made no mistake from close range to put the Hurricanes back in front. However, just as in the first quarter, Caversham rose to the challenge and drove the Hurricanes back to their goal. Will Goulden was decisive in defence, clearing the ball powerfully several times, and Will Lindsay persevered doggedly on the left side, but in the end Caversham found a way through to equalise again. Now it was Caversham’s turn to take control. The Hurricanes were fighting hard in midfield, Shiva Vadhoolan, Oscar Robinson and Jack Callaway battling to keep Caversham out, whilst Will Goulden again made some key interventions in defence. However despite all this, a long shot from Caversham found its way through and allowed them to take the lead.

The third quarter started with Caversham maintaining pressure on the Hurricanes. Goalkeeper Jake Thatcher made an important save to keep the Hurricanes in touch. Will Goulden, now in the striker’s role, was into the attack from the halfway line. Caversham still had the upper hand and the Hurricanes were in defence.

The Hurricanes were able to work the ball forwards, a coherent move leading to the equaliser. Will Goulden scored with a typically powerful strike from close in. After the goal, both teams were energised, looking for the upper hand. The quarter ended with a corner for Caversham, but the Hurricanes broke and almost scored.

Heavy rain was falling at the start of the final quarter, but both teams kept searching for the lead. Caversham forced new goalkeeper Jack Tookey into two great saves, whilst at the other end the Hurricanes still pushed hard, Oscar Robinson shooting narrowly wide. When the final whistle blew, the score was level, which was perhaps a fair outcome between two well-matched and competitive teams.

Check Your Blood Pressure and Stay Healthy
Scroll to top