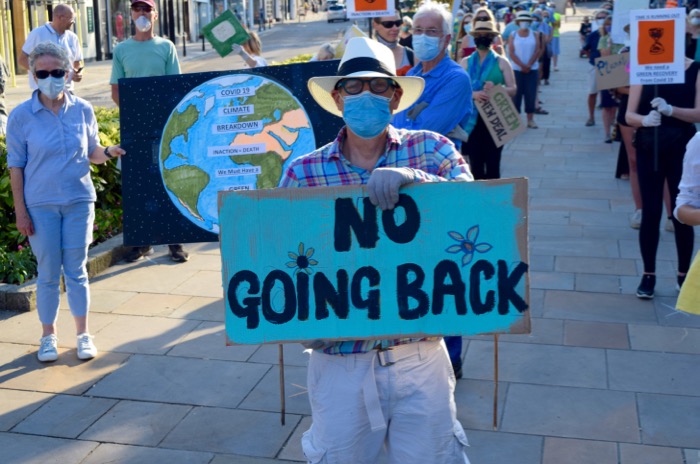 A local group of Extinction Rebellion (XR) is holding a Covid-safe and socially distanced protest and talks in Henley town centre this Saturday 12 September. The actions will highlight the Climate and Ecological Emergency (CEE) Bill currently being considered by Parliament, and address the issue of air pollution and its impact on town residents, specifically children.

As Henley was one of many UK towns that declared a climate emergency earlier this year, the protest seeks to encourage local government leaders to get this Bill enacted into law. All attending or unable to attend are likewise encouraged to write to their MPs and local councillors to urge them to adopt this Bill.

As part of the protest, XR Henley is hosting evidence-based talks entitled ‘No Future for Fossil Fuels’. The burning of fossil fuels is one of the major causes of climate change. The deadly air pollution created by burning gas, coal and oil kills 40,000 people a year in the UK alone. This costs the government £20bn annually.

Henley’s air pollution problems are transport (fossil fuel) related, with traffic volumes at 30% over capacity. The impact of this is being borne by the town’s children, with one-fifth of primary school children in Henley now using an inhaler.

The hour-long, socially-distanced protest will be held at 11am in the Town Hall, followed by further short informative talks from 12.30 to 2pm held at the Bandstand, Mill Meadows. Featured speakers will include scientist Pete Knapp PhD, Imperial College London expert on air quality (Scientists for XR), David Dickie from Clean Air for Henley and Patrick Hart, GP (Doctors for XR).

Scientist Pete Knapp will say: “Air pollution is the world’s largest environmental cause of human disease and premature death. About half of the early deaths related to heart disease and stroke are caused by air pollution.”  He goes on to say that an estimated 4.8 million people die every year from outdoor air pollution, and he states that air pollution is bad in Henley.  “This small and beautiful town suffers pollution hotspots at the bottom of Grey’s Road, Duke Street and by Red Lion Lawns, most likely a result of traffic, which is currently 30% over-capacity. However, air pollution spans across the whole world.”

Concerned residents are further urged to join local groups working to combat the climate and ecological emergency, and to sign the ‘Ban HGVs short-cutting through Henley‘ campaign championed by Amanda Chumas.  A large HGV carrying a mobile home caused traffic chaos yesterday afternoon as it got stuck trying to turn right behind the Town Hall as it couldn’t go down Bell Street because the road was closed for emergency water works.

If you are unable to join the protest or attend the talks, please consider sending a message to your MP and local councillors about the CEE Bill, using a template letter found here: https://drive.google.com/file/d/1kgx2Rdt5xB3jzNEVXpVIbuxdS90SnfE2/view

If attending, please ensure you are Covid symptom-free and wear a mask to protect yourself and others.