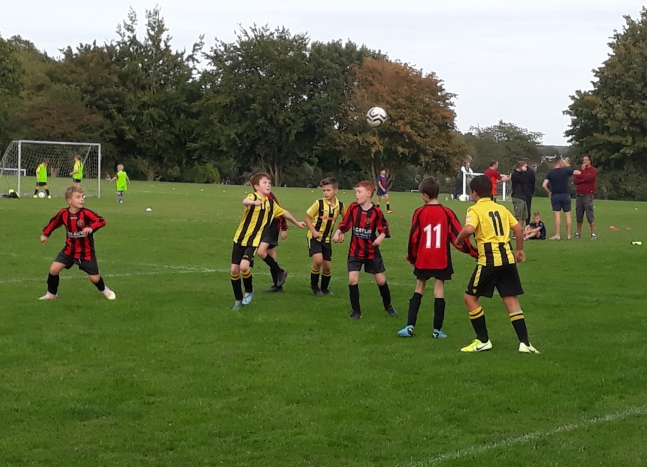 The final game of the Henley Hurricanes U10s pre-season fixtures was a tough away fixture against local rivals Rotherfield United Lions. The first quarter began with the Hurricanes taking the initiative, some great passing between Oscar Robinson and Will Lindsay provided an opportunity, with Will Goulden’s shot tantalisingly close. For much of the quarter, the Lions attacked, giving the Hurricanes a good defensive workout. However, the Hurricanes were up to the task, Dominic Ellis and Will Lindsay defending well and man-of-the-match Harrison Carpenter Buckett in control in the goal. When opportunities arose, the Hurricanes were quick to get forward, but the first quarter ended goalless.

The second quarter was also a lively affair. Will Goulden, now switched to defence, was again decisive, cutting out the Lions’ attacks. The Hurricanes worked hard in midfield, with great commitment from Jack Tookey to win one particular challenge. Both teams were pushing hard to take the advantage, but the second quarter also ended without a goal scored.

In the third quarter, the Hurricanes’ perseverance broke the deadlock. Oscar Robinson’s strength got him past the defenders and, following a great pass from Will Goulden, he put it cleanly past the keeper. Conceding the goal didn’t stop the Lions from being dangerous on the break, and the Hurricanes overcame a couple of heart-in-mouth defensive moments. However, it was the Hurricanes who had the upper hand, and peppered the Rotherfield goal with a succession of corners. This continued into the final quarter, with both teams hungry for a goal. It was the Hurricanes who came closest, an accurate through ball from Dominic Ellis in defence finding Will Lindsay, whose shot ricocheted off the underside of the crossbar. The game was really competitive from start to finish, and sets the Hurricanes up for the season ahead.