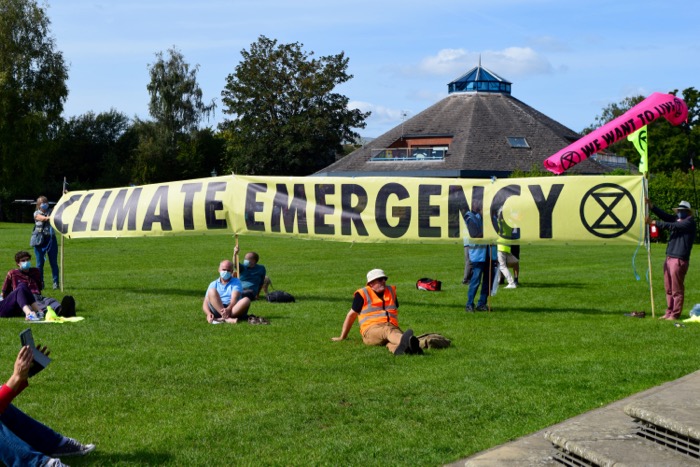 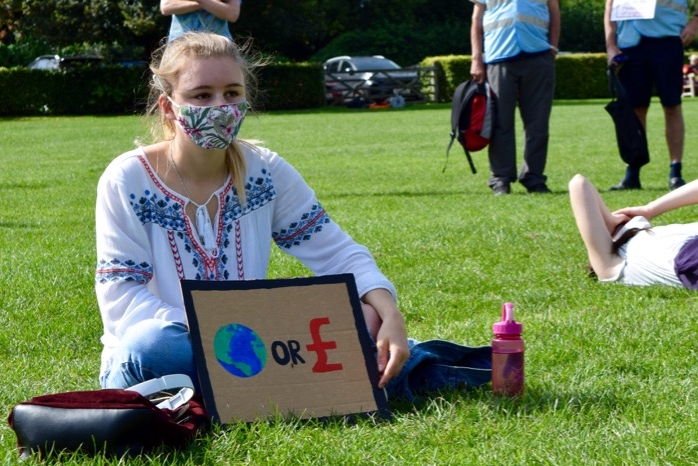 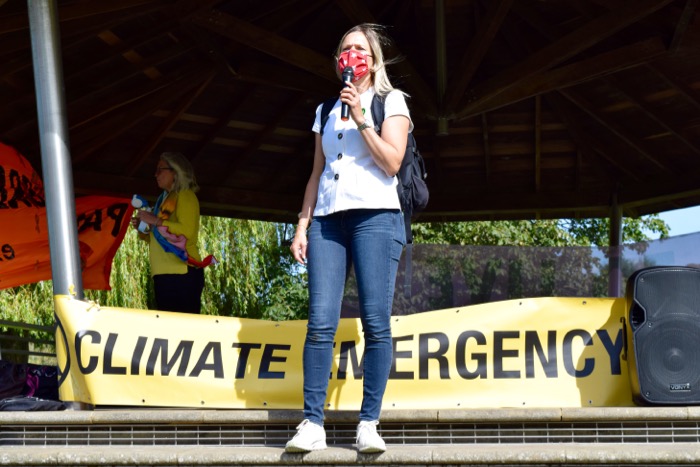 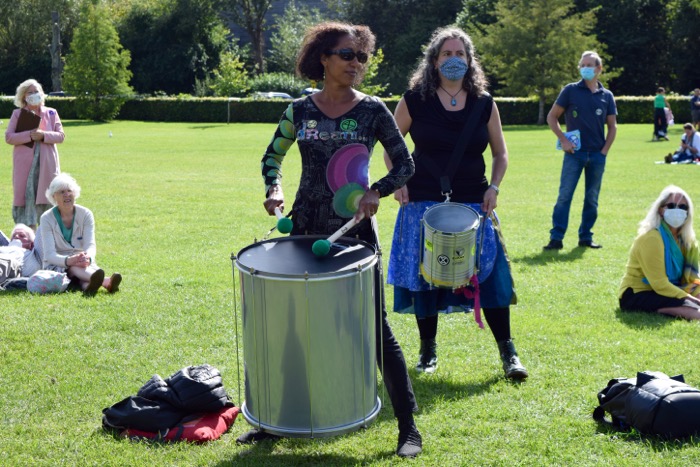 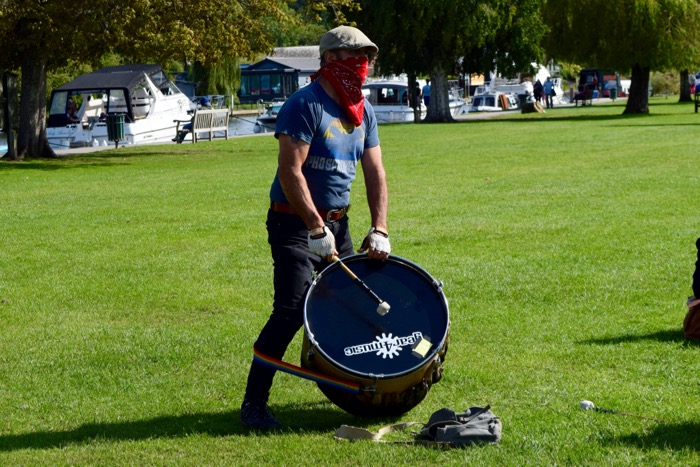 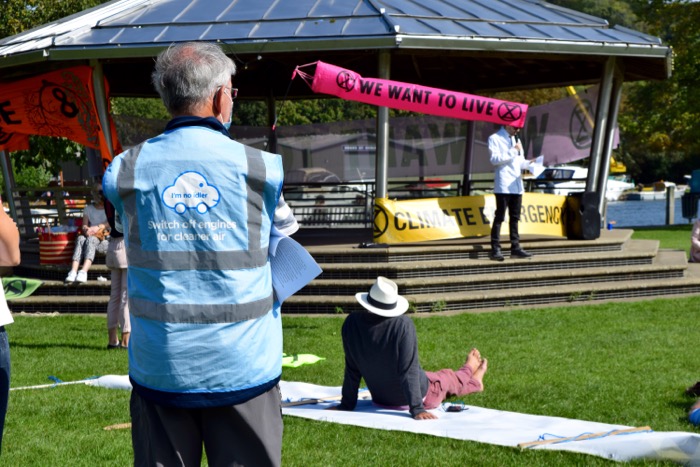 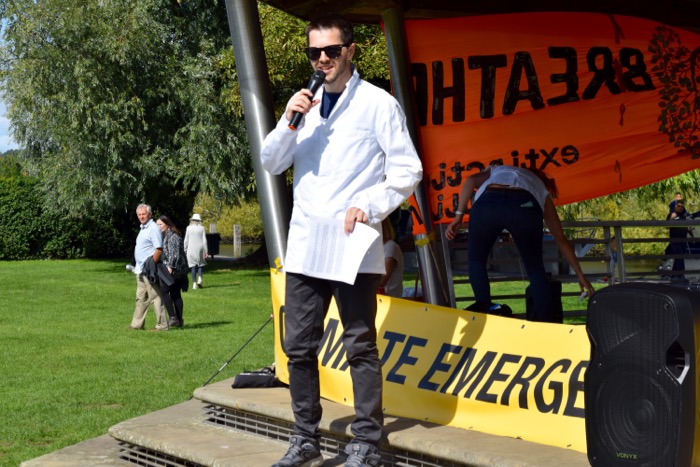 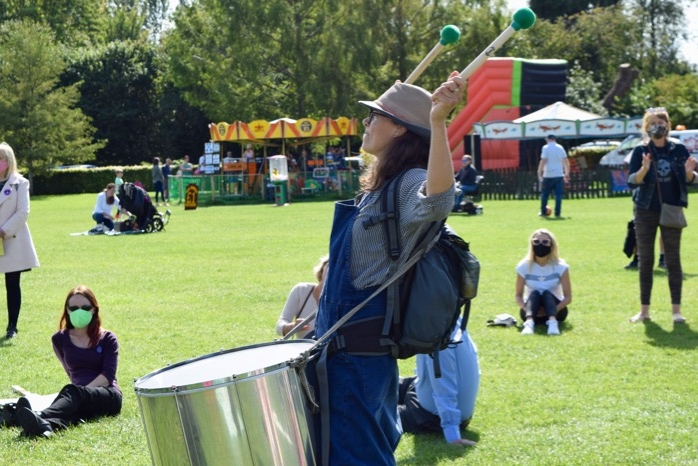 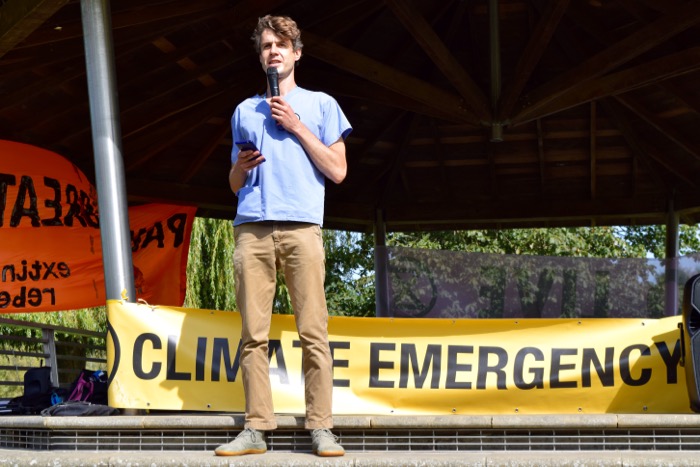 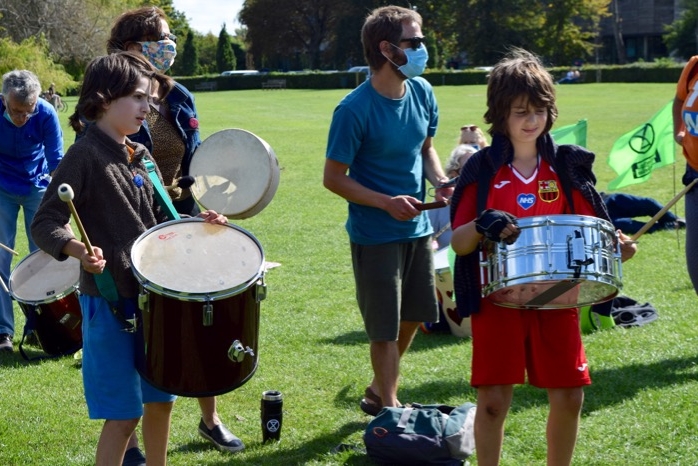 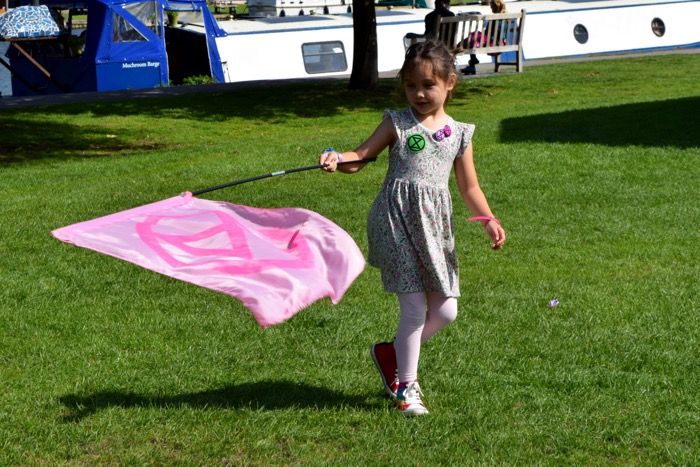 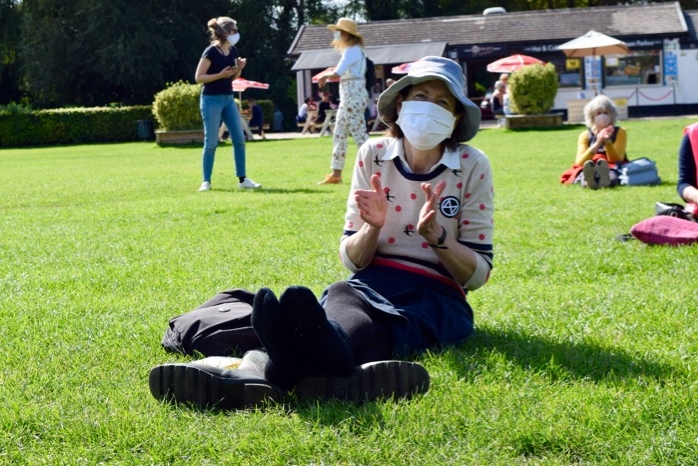 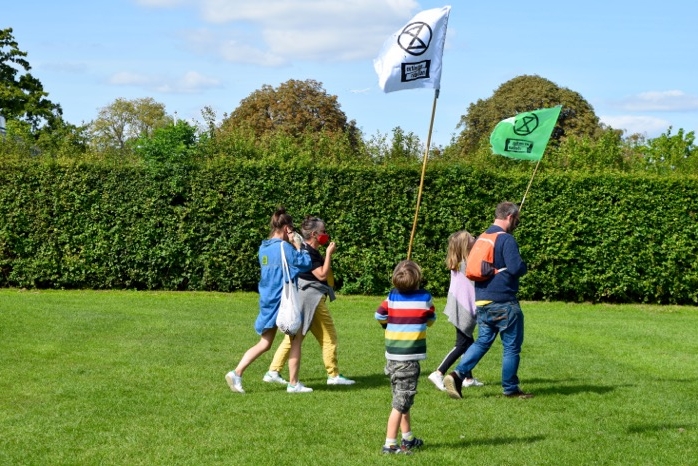 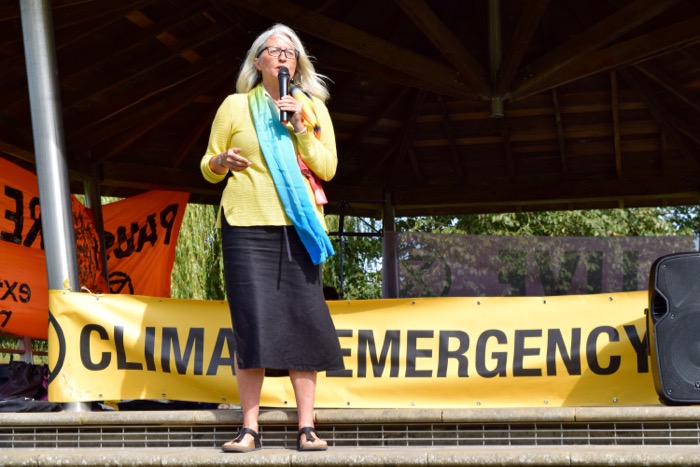 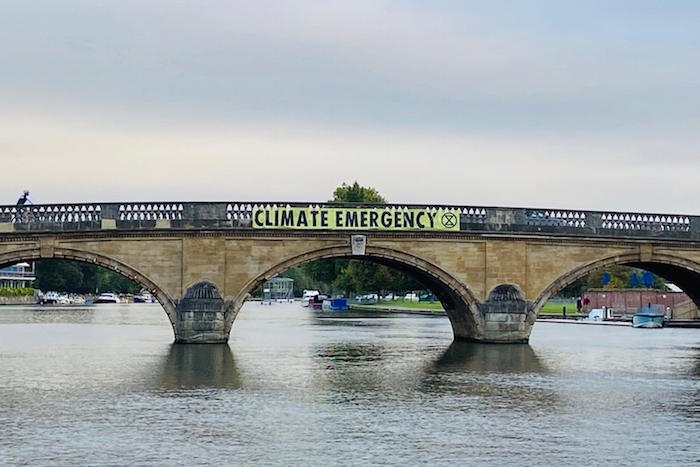 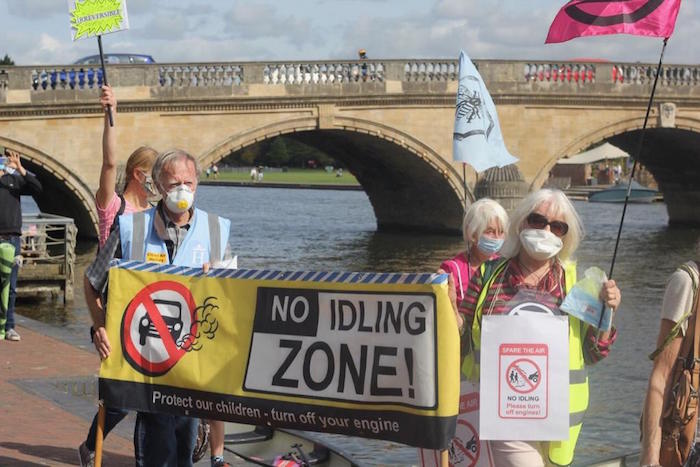 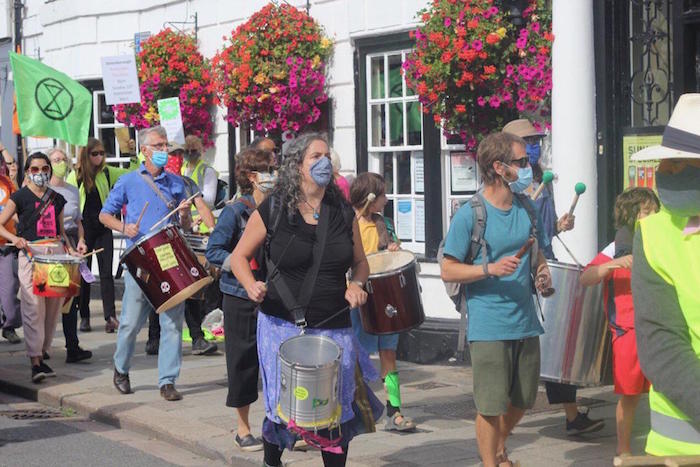 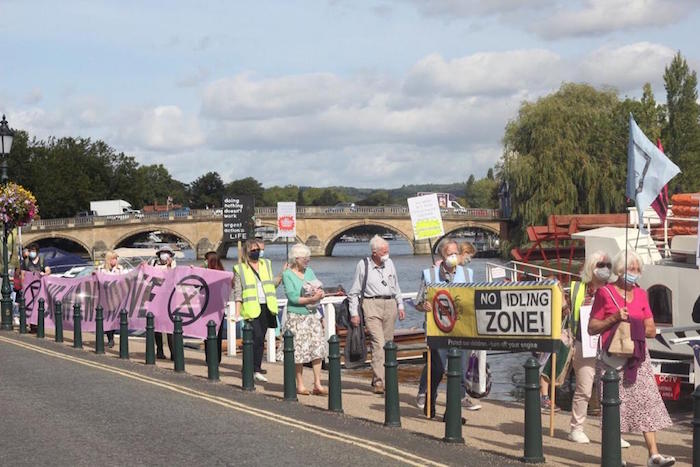 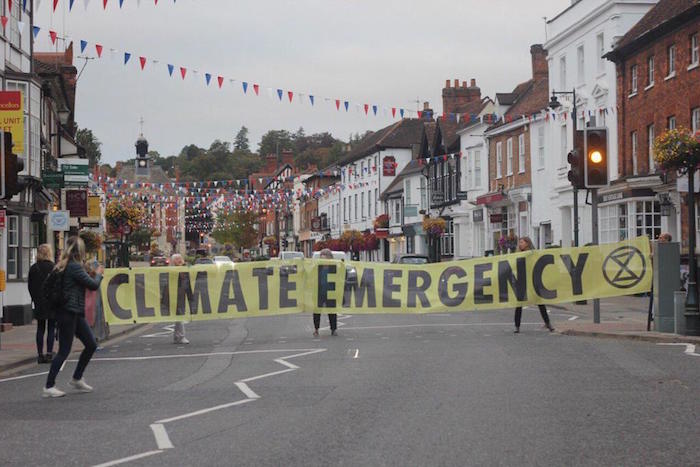 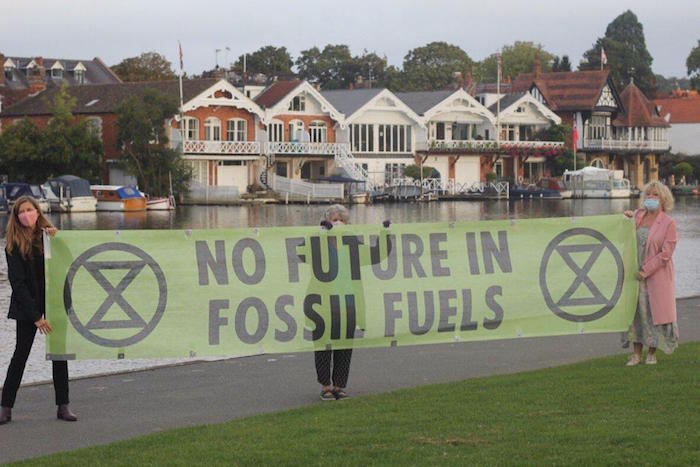 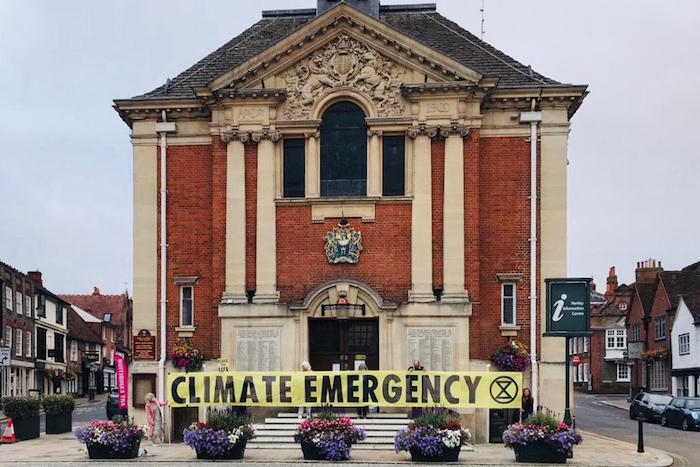 Extinction Rebellion Henley turned heads last Saturday morning as protestors marched through the town, accompanied by a band of drummers, to draw attention to the climate emergency. The group of around 50 peaceful protestors gathered outside the Catherine Wheel in Hart St before proceeding to the bandstand in Mill Meadows for a set of informative speeches on the climate crisis.

The non-disruptive protest was organised by the local Extinction Rebellion group (XR Henley) to highlight the state of climate emergency declared earlier this year by Henley Town Council. Though originally planned to begin outside the Town Hall, the organisers moved the group to Hart St so as not to disturb a wedding taking place there. Participants were asked by XR Henley to observe social distancing, and all wore face masks.

At 11:30am (after the wedding ceremony had finished), the drumming began, and the group marched from Hart St down towards the bridge, then turning right towards Mill Meadows. The activists carried placards and large banners displaying statements such as ‘climate emergency’, ‘no future in fossil fuels’ and ’we want to live’. The banners were draped around the bandstand in Mill Meadows for the speeches. The large yellow banner, reading ‘climate emergency’, was also hung from Henley Bridge earlier on Saturday morning.

The speeches in Mill Meadows were given by representatives from a number of organisations, including members of Scientists for XR, Doctors for XR, Clean Air For Henley, and XR Marlow. Covering a broad range of topics, the speakers emphasised the need for urgent government action to mitigate the effects of climate change, and pushed for the adoption of the Climate and Ecological Emergency Bill (a Private Members’ Bill written by scientists, lawyers and activists). Multiple speakers also touched upon the dangers of air pollution in Henley, referencing the Henley Herald’s campaign against HGVs.

Pete Knapp, an Air Quality researcher at Imperial College in London and the University of Bristol, and member of XR Scientists, gave a speech in which he explained the many causes of air pollution and their harmful impact on both people and planet. He stated, “Air pollution is the world’s largest environmental cause of human disease and premature death. About half of the early deaths related to heart disease and stroke are caused by air pollution. There is an estimated 7 million premature deaths each year with 4.8 million dying from outdoor pollution, and the remainder from household pollution.”

Pete Knapp’s speech was grounded in science and statistics, detailing the impact of meat consumption, fossil fuel usage and even actions within our homes (including burning fires and frying food) on our emissions, and therefore on human and planetary health. Speaking specifically about HGVs, he said, “HGVs are essential to our economy and food delivery, and there are ways to retrofit them with devices to reduce their pollution. I wait in anticipation of a revolution in non-polluting HGVs. However, we are not yet at this stage and Henley is not an appropriate short-cut for these vehicles, especially not 150 per hour, which has been reported. The narrow pavements and sharp turns exacerbate the levels of air pollution generated, which fill your streets, houses, shops and schools. I fully support the proposal to ban vehicles over 7.5 tonnes with permits given for legitimate deliveries.”

Pete advised that, to decrease individual carbon footprints, people should change their energy provider to a renewable supplier (such as Octopus), reduce consumption of meat, dairy, palm oil and exotic foods, and reduce fuel consumption when possible by walking or cycling.

David Dickie, leader of Clean Air for Henley, also gave a speech (although he is not a member of XR Henley) with a heavy focus on local air quality. He stated, “Having lived in Henley for over 70 years and, now retired, I am passionate about giving children their legal right to breathe clean air. Asthma remains the top cause for missing school according to Mums for Lungs, a really top campaign group. Henley became an Air Quality Management Area in 2002 which means that we were not meeting the legal requirements for Clean Air. Still don’t, 10 years after the promise to do so. The District Council own the AQMA and the action plan but transport remains the responsibility of the county. The pollution measured is nitrogen dioxide. The high levels are related to transport with HGVs and buses being 3% of traffic but 33% of pollution. Hence the recent petition from Henley Herald on HGVs.” David Dickie highlighted the achievements of Greener Henley (of which Clean Air for Henley is part) since working together with the Town Council, including the introduction of the 20mph zone and particulate monitoring in Greys Road.

XR Henley co-ordinator Kate Oldridge made the closing speech. Kate, a qualified lawyer now working as an executive coach, spoke about the need for system change and government action in tackling climate breakdown. She said, “I only speak for myself when I say this, but I am not an anarchist, or an anti-capitalist. As Oxford University Economist Kate Raworth has said, I think we need to redefine capitalism. I am not an economist, but the more I read, I think that maybe stakeholder capitalism — where companies include people and planet as stakeholders — holds the answer. We cannot continue with endless growth and most work towards a circular economy.

“For people who say that XR is not for me, this is everyone’s problem. We don’t have a choice.  And the best chance we have of tackling it is to get the government to declare a climate emergency. This is the only way of bringing about the massive change we need is with radical government intervention. Look at the changes we have made so quickly from Covid – suddenly the government is injecting vast sums into the economy not seen since the Marshall Plan. Look at the way so many companies have adapted to working from home. There is loads of great stuff going on by individuals and corporates to reduce their carbon footprint. But Extinction Rebellion is the best chance we have of making the government declare a climate emergency and changing the system. Without this, the system is not going to change quickly enough.”

XR Henley are planning for further non-disruptive action this year, and are seeking more members to get involved and make their demands heard. As Kate Oldridge said on Saturday, “Everyone has a responsibility to speak up and out to their family and friends about the emergency. I know it’s hard. I think it is probably straining some of my own friendships. But we all need to start taking responsibility for making change, because we can’t rely on some agency to step in and do it. It needs to be driven by us.”

To get involved with XR Henley, contact them via their Facebook page. To sign the Henley Herald’s petition to obtain a Traffic Regulation Order to ban HGVs using Henley as a cut-through, visit the change.org page.