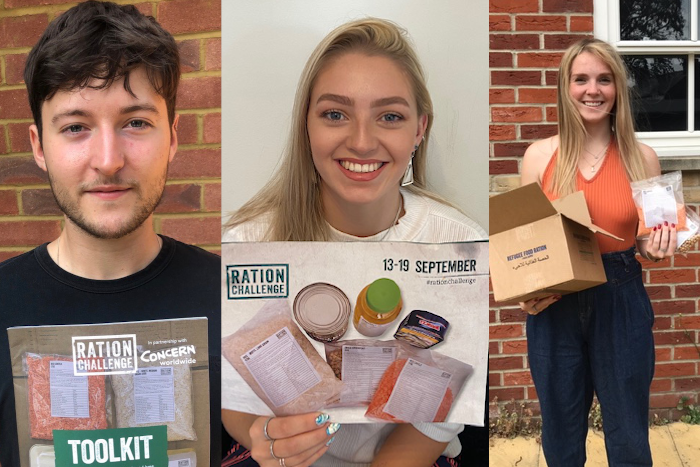 Three Henley residents have taken on the Rations Challenge to raise money for international humanitarian organisation, Concern Worldwide. From 13th-19th September, Phoebe Miller, Lauren Miller and Josh McGrath ate a limited diet of rice, lentils, chickpeas, kidney beans and sardines — an example of the food rations given to Syrian refugees. The trio have so far raised over £330, which will help to provide emergency food, hygiene kits and life-saving support to refugees.

Phoebe Miller explained, “We decided to take part in this challenge as we wanted to raise money and awareness for Syrian refugees. We also wanted to experience what it’s like to live off the rations that they eat for a week. The challenge was difficult but at the same time eye opening as it made us aware of how much food we consume yet don’t need, compared to how little the refugees have per week.”

The group were each given 420g of rice, 170g of lentils, 85g of dried chickpeas, a 400g tin of kidney beans, 120g of tinned sardines (which vegetarians and vegans could replace with tofu) and 330ml of oil. They also received a food coupon to buy flour and more rice. As their week-long challenge progressed, Phoebe, Lauren and Josh also earned rewards for their fundraising efforts, and were allowed to add salt, one spice and 170g of vegetables to their rations. They were only allowed to drink water for the duration of the week.

In preparation for the challenge, Phoebe explained, “The week before the ration week, we tried to make ourselves aware of the food we were eating and trying to cut down so that we were used to less food. We also planned out our meals for the week so that we wouldn’t run out of rations before the end of the week.”

As for the Ration Week itself, Phoebe said, “The hardest thing we found was trying to keep the meals interesting and not falling into the trap of cooking the same meal all the time. Another difficult think was learning how to cook dried lentils and dried chicken peas!”

For their efforts, the group have so far raised £337.47 — 135% of their original £250 target. The money they have raised will aid Concern Worldwide in their work supporting Syrian refugees in Jordan, as well as in their efforts to end poverty and hunger worldwide. To quantify the contribution made by Lauren, Josh and Phoebe, £157 can provide enough rations to feed one person for an entire year (as stated on the Ration Challenge’s fundraising pages).

Phoebe said, “The ration challenge for us lasts one week but for the refugees it is their life. It was challenging yet made easier by the fact there was always an end in sight, but for refugees it’s not something that ends after a week.”

Though they are now back to eating freely, Josh, Lauren and Phoebe’s fundraising page is still welcoming donations. Show your support by sponsoring them here.