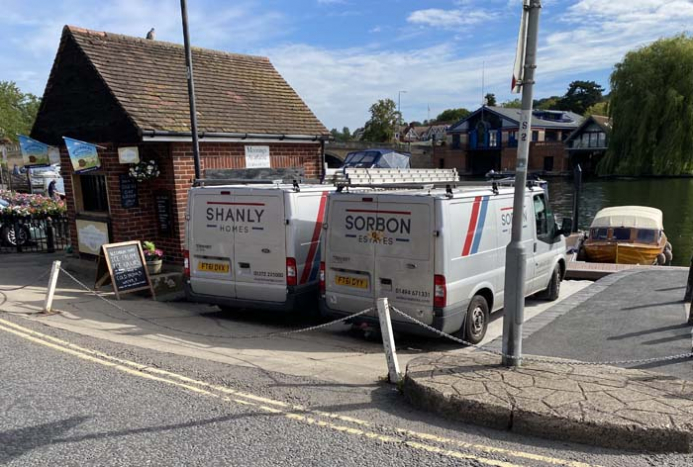 The Environment Agency’s permitting enforcement team have ruled that the levelling of the public slipway on Thameside is not a significant enough flood risk to carry out enforcement, stated Henley Town Council Planning Officer, Jodie Rhymes at the Planning Committee Meeting on Tuesday. The slipway was concreted over in July by Sorbon Estates without permission from South Oxfordshire District Council (SODC) or the Environment Agency.

Jodie Rhymes stated on Tuesday, “The Flood Risk Permitting Enforcement Team have now investigated the works carried out without a permit and have assessed the flood risk caused is low, and they will therefore not be able to carry out enforcement in relation to the lack of flood risk and environmental permit.”

Councillor Laurence Plant responded, “That is ridiculous because seeing how difficult it is to try and get planning in or on a flood plain, from all the excuses about every ton or cubic metre of concrete put in needs to be taken out somewhere to mitigate the flood risk, they’ve put in a least a few cubic tons of cement into an otherwise flood plain, so are they going to take it out somewhere else or mitigate the risk? If this was a residential application or even a commercial application for something like a lido, it would be near impossible, and yet Sorbon have got away with dumping a bunch of concrete into a flood plain. It seems mind-blowing.”

Councillor Ian Clark was in agreement with Councillor Plant’s comments, adding, “That has always been a public slipway as long as I can remember. That should be put back to a slipway, and Councillor Gawrysiak should write to Sorbon and insist on getting it taken out at their cost, not the council’s.”

Councillors Arlett, Gawrysiak, and Thomas expressed concern that the concreting of the slipway may lead to increased flooding on Thameside,

Councillor David Eggleton said, “How many more people are going to do things and keep getting away with things, because it just opens a whole can of worms, really. I believe that someone has got to take action and remove it and show that people can’t just do these things.”

Councillor Stefan Gawrysiak stated, “I absolutely agree with Councillor Eggleton on this that this must not be allowed to drag on and on and on. We’ve really got to come to a conclusion, and it looks as though we’ve got substantial historical evidence that it’s either owned by the council or not owned by anybody. If Sorbon have put this concrete on land that they don’t own, as we know, we should send in the diggers and get it out.”

The committee agreed that they would ask for the Environment Agency’s flooding mitigation plan in relation to the slipway. SODC’s enforcement team are also investigating the incident.

Henley Bowling Club Round Up of Season
Scroll to top